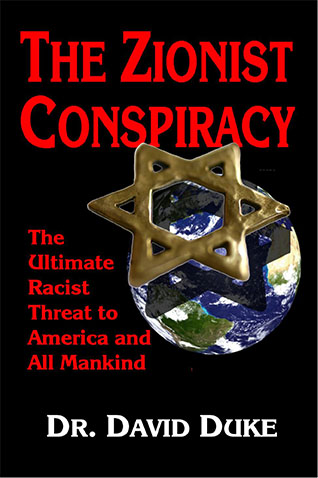 Free Speech Press is proud to announce that Dr. David Duke’s new book, The Zionist Conspiracy, is now well under way and due for publication within a short period of time.

“It is fascinating to realize that the takeover of the American elite was a vital precursor of the Jewish takeover of Palestine. In fact, the takeover of America has colored every aspect of the emergent American globalist domination. From the last half of the 20th century to the present it is still the most important fact of life for the world today,” the opening chapter reads.

“It affects war, politics, finance, economic realities, and very importantly, it influences a global media that impacts not only political perceptions but even our core values. And this power is not just limited to the people of the United States, but reaches into the minds and families of almost everyone on Earth.

“People like David Brooks, institutions such as The New York Times, the Hollywood establishment and the global media conglomerates have the capacity to reach into every home with a power to influence opinion, values, politics, health and culture far greater than any dictator or tyrant of old.

“So, what is the character and source of this new power? It will be shown here that it is driven by an ethnic racism of the classic sense.

“It has elements of a tribal, ideological supremacy in concert with a supremacist religion. And it achieves and maintains power through its own teamwork and through racial/ethnic discrimination and repression against its perceived enemies and competitors. How it works can be clearly illustrated in the racist, tribal takeover of Harvard and the Ivy League.”

You can read the entire first chapter of this book in PDF format by clicking here.