Commentary — The Syrian President pointed out that the United States and its dozens of allies are actually doing much less fighting against ISIS than Syria is. The truth is, of course, that President Assad’s Syrian army is the one effective force fighting ISIS, while the United States and its allies have been pouring money and weapons into the “rebel” forces fighting against Assad. Thus, on balance, the United States-led coalition is actually allied with ISIS. American friends like Saudi Arabia, Qatar, and Turkey have lent direct support to ISIS in terms of money, weapons, and logistics. Even Jordan, whose King was recently portrayed on neocon media outlets as the anti-ISIS tough guy, has allowed itself to become a major avenue for ISIS’s primarily foreign fighters to infiltrate its neighbors Syria and Iraq.

Then of course there is the shadowy role of Israel. One must ask, “qui bono?”, who benefits? Israel has been the biggest beneficiary of ISIS. ISIS unleashes all its terror on Muslim “heretics,” Christians, and other minorities, and seems completely unconcerned about the Zionist hegemons of the Middle East. They and their Syrian “rebel” effective allies are keeping the Syrian government pinned down. Syria along with Lebanon’s Hezbollah movement are perhaps the biggest obstacles to Netanyahu’s dream of attacking Iran with impunity. And of course there are the frequent reports of ISIS fighters being treated in Israeli hospitals and other indications of back-door links.

Assad’s interview with Russia Today makes some very interesting points and is well worth the read.

The alliance of 60 countries declaring plans to finish off the Islamic State is not serious, Syrian President Bashar Assad told Russian media. Some of its members would prefer to retain the terrorist force to blackmail different countries, he said.

The rate of airstrikes conducted by the anti-ISIS coalition member states, some of which are “rich and advanced,” is only about 10 raids a day on the territory of both Syria and Iraq, Assad said in an interview published Friday.

“The Syrian Air Force, which is very small in comparison to this coalition, conducts in a single day many times the number of the airstrikes conducted by a coalition which includes 60 countries,” Assad said.

“This doesn’t make sense. This shows the lack of seriousness,” said Syria’s president. “They don’t want to get rid of ISIS completely.”

‘Peacekeepers in Syria would mean recognition of Islamic State’

Moreover, he warned that the decision to send peacekeepers into Syria is unacceptable and could have dangerous consequences. If implemented, the move would mean recognizing Islamic State.

“The peacekeeping force is usually based between countries at war with each other. And when someone talks about sending peacekeepers to deal with IS, that acknowledges IS as a state. Such rhetoric is unacceptable and dangerous,” Assad said.

The Syrian president said the West does not have a political solution to the crisis in Syria, claiming it is only interested in destroying the government.

“They want to turn us into puppets. I do not think that the West has a political solution. It does not want one. When I say the West, I am primarily referring to the US, France, the UK. Other countries are secondary.”

To put an end to the ongoing armed conflict in Syria between the government troops and international militants, such countries as Turkey, Saudi Arabia, Qatar, and some European countries should stop arming the terrorists, the Syrian president said. 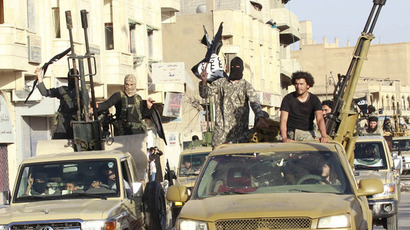 The Syrian president told Russian journalists that Damascus has no direct contact with the US and is not involved in any discussions.

“Certain ideas get passed down through third parties, but that cannot be considered as serious dialogue,” Assad said, adding that the only option for his country is to wait for American policies to change.

According to the leader’s point of view, there are two political camps in the US – a peace-leaning one and a more radical, aggressive one. The former is “a minority,” while the latter calls all the shots in foreign policy.

The warmongers in the second camp fully support aggressive ideas such as direct US military involvement in Syria and Iraq, as well as sending weapons to Ukraine.

“There is a connection between the Syrian crisis and what is happening in Ukraine. Firstly, because both countries are important for Russia. Secondly, because there is a goal in both cases to weaken Russia and create puppet states,” Assad told Russian reporters.

When asked about the Russian naval facility in the Syrian port of Tartus, Assad said that his government would support the idea of reviving and expanding it into a military base, should Moscow seek such an option.

“We welcome the expansion of Russian presence in [the] eastern Mediterranean, especially near our shores and in our ports,”he said.

The naval facility in Tartus was constructed during the Soviet era and was mainly used for repairing and resupplying Russian warships in the Mediterranean. Once the Syrian crisis escalated, all Russian military personnel were withdrawn from the facility.

Assad stressed that Russia’s presence provided a certain sense of balance in the region. He added that in the past, the more visible Moscow’s influence was in the region, the more stable the area became.

Next Post Dr. Duke explains why Zio America actually allies itself with ISIS