Commentary — The answer is obvious. From former presidential candidate Pat Buchanan to Princeton Professor Stephen F. Cohen, the consensus among free thinking analysts is that Putin is the preeminent statesman of our times. Yet the Zio-media promotes the meme of Putin as the greatest villain on earth, and anyone with even the most indirect association with him is unfit and treasonous. We must counter this completely false Jewish narrative and defend President Putin against those who would risk World War III in order to regime change him as punishment for having taken his country back from the Jewish mobsters that had taken it over. 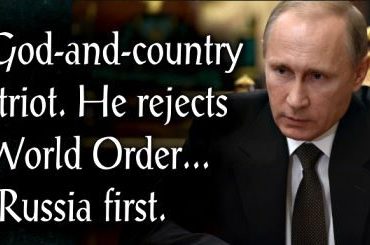 Is Putin the ‘Preeminent Statesman’ of Our Times?

“If we were to use traditional measures for understanding leaders, which involve the defense of borders and national flourishing, Putin would count as the preeminent statesman of our time.

“On the world stage, who could vie with him?”

So asks Chris Caldwell of the Weekly Standard in a remarkable essay in Hillsdale College’s March issue of its magazine, Imprimis.

What elevates Putin above all other 21st-century leaders?

“When Putin took power in the winter of 1999-2000, his country was defenseless. It was bankrupt. It was being carved up by its new kleptocratic elites, in collusion with its old imperial rivals, the Americans. Putin changed that.

“In the first decade of this century, he did what Kemal Ataturk had done in Turkey in the 1920s. Out of a crumbling empire, he resurrected a national-state, and gave it coherence and purpose. He disciplined his country’s plutocrats. He restored its military strength. And he refused, with ever blunter rhetoric, to accept for Russia a subservient role in an American-run world system drawn up by foreign politicians and business leaders. His voters credit him with having saved his country.”

Putin’s approval rating, after 17 years in power, exceeds that of any rival Western leader. But while his impressive strides toward making Russia great again explain why he is revered at home and in the Russian diaspora, what explains Putin’s appeal in the West, despite a press that is every bit as savage as President Trump’s?

Answer: Putin stands against the Western progressive vision of what mankind’s future ought to be. Years ago, he aligned himself with traditionalists, nationalists and populists of the West, and against what they had come to despise in their own decadent civilization.

What they abhorred, Putin abhorred. He is a God-and-country Russian patriot. He rejects the New World Order established at the Cold War’s end by the United States. Putin puts Russia first.

And in defying the Americans he speaks for those millions of Europeans who wish to restore their national identities and recapture their lost sovereignty from the supranational European Union. Putin also stands against the progressive moral relativism of a Western elite that has cut its Christian roots to embrace secularism and hedonism.

The U.S. establishment loathes Putin because, they say, he is an aggressor, a tyrant, a “killer.” He invaded and occupies Ukraine. His old KGB comrades assassinate journalists, defectors and dissidents.

Yet while politics under both czars and commissars has often been a blood sport in Russia, what has Putin done to his domestic enemies to rival what our Arab ally Gen. Abdel-Fattah el-Sissi has done to the Muslim Brotherhood he overthrew in a military coup in Egypt?

What has Putin done to rival what our NATO ally President Erdogan has done in Turkey, jailing 40,000 people since last July’s coup — or our Philippine ally Rodrigo Duterte, who has presided over the extrajudicial killing of thousands of drug dealers?

Does anyone think President Xi Jinping would have handled mass demonstrations against his regime in Tiananmen Square more gingerly than did President Putin this last week in Moscow?

Much of the hostility toward Putin stems from the fact that he not only defies the West, when standing up for Russia’s interests, he often succeeds in his defiance and goes unpunished and unrepentant.

He not only remains popular in his own country, but has admirers in nations whose political establishments are implacably hostile to him.

In December, one poll found 37 percent of all Republicans had a favorable view of the Russian leader, but only 17 percent were positive on President Barack Obama.

There is another reason Putin is viewed favorably. Millions of ethnonationalists who wish to see their nations secede from the EU see him as an ally. While Putin has openly welcomed many of these movements, America’s elite do not take even a neutral stance.

Putin has read the new century better than his rivals. While the 20th century saw the world divided between a Communist East and a free and democratic West, new and different struggles define the 21st.

The new dividing lines are between social conservatism and self-indulgent secularism, between tribalism and transnationalism, between the nation-state and the New World Order.

On the new dividing lines, Putin is on the side of the insurgents. Those who envision de Gaulle’s Europe of Nations replacing the vision of One Europe, toward which the EU is heading, see Putin as an ally.

So the old question arises: Who owns the future?

In the new struggles of the new century, it is not impossible that Russia — as was America in the Cold War — may be on the winning side. Secessionist parties across Europe already look to Moscow rather than across the Atlantic.

“Putin has become a symbol of national sovereignty in its battle with globalism,” writes Caldwell. “That turns out to be the big battle of our times. As our last election shows, that’s true even here.”

Previous Post Why is Evil Putin hacking our Vibrant and Culturally Enriched Democracy?

Next Post Why Jared Kushner is a Huge Threat to the Trump Revolution!