It has been a bad few weeks for the Zionist supremacists—first they were out-maneuvered by Syria’s Assad and now the new Iranian president has brought world attention to focus on Israel’s nuclear arsenal and the rampant hypocrisy of the Jewish lobby over the matter. 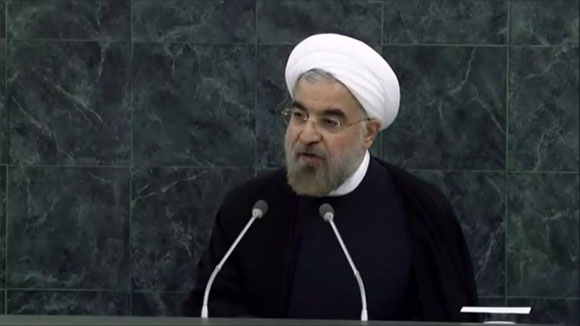 Iranian president Hassan Rouhani used his first appearance at the United Nations to call on Israel to join an international treaty banning the spread of nuclear weapons, chiding the Jewish state for being the only Mideast nation that has failed to do so.

“Almost four decades of international efforts to establish a nuclear weapon-free zone in the Middle East have regrettably failed,” Rouhani told a United Nations meeting on nuclear disarmament on the sidelines of the General Assembly.

Rouhani also said all nations should be subject to International Atomic Energy Agency inspections and other nuclear safeguards.

Israel is the only Mideast nation that has not signed the landmark 1979 Nuclear Non-Proliferation Treaty, and Rouhani said that has prevented the region from establishing a nuclear-free zone.

“No nation should possess nuclear weapons, since there are no right hands for these wrong weapons,” Rouhani said.

His comments were reported by the New York Times—but that article was pulled shortly afterwards and cannot be found on that newspaper’s site any more—obviously an attempt at censorship.

However, the internet, being what it is, had already copied out the article, and it can still be found at the Sydney Morning Herald website, where it continued:

The Iranians have frequently pointed out that they have publicly renounced nuclear arms and that — unlike Israel — Iran is a member of the International Atomic Energy Agency, the United Nations nuclear monitor. The Iranians also have countered that Israel is believed to already have an arsenal of nuclear weapons, which it refuses to confirm or deny.

According to the Arms Control Association, a non-proliferation group in Washington, Israel is suspected of having 100 to 200 nuclear warheads. Israel has said it will “not be the first country to introduce nuclear weapons in the Middle East”.

Mr Rouhani said in his speech on Thursday that the total elimination of nuclear weapons should be the goal, particularly in his part of the world.

“Almost four decades of international efforts to establish a nuclear-weapon-free zone in the Middle East have regrettably failed,” Mr Rouhani said in a translated version of his speech, furnished by Iran’s United Nations Mission.

“Urgent practical steps toward the establishment of such a zone are necessary,” he said. “Israel, the only non-party to the non-proliferation treaty in this region, should join thereto without any further delay. Accordingly, all nuclear activities in the region should be subject to the I.A.E.A. comprehensive safeguards.”

He said in the speech that the establishment of a nuclear-free zone in the Middle East would “constitute a contribution to the objective of nuclear disarmament” and called for a conference to establish such a zone, “without any further delay, with the participation of all countries in the region to avoid unwanted consequences.”