By Dr. Patrick Slattery — I admit that I will be checking the press wires before I post this article, because the situation seems to be very fluid. There is a lot of despair out their regarding President Trump bellicose tweets aimed at Russia. How could he say such retarded things less than a week after having announced his intentions to completely withdraw American troops from Syria?

I think there are two precedents from the past year to look at as examples. The first is what happened a year ago, when there was an identical memed gas attack. On April 7, 2017, Trump lobbed 59 missiles at Syria, killed dozens of Syrian military (but avoided any Russian casualties), and then declared “mission accomplished” and basked in the glow of the Zio-media calling him “presidential” for a few days.

It was my feeling at the time that Trump did the missile strike to get the Jews off his back. I think he felt emboldened enough to try to snuff out the Russia hoax, which was being pushed by FBI Director Comey. He got Deputy Attorney General (((Rod Rosenstein))), who had just taken office on April 25, to write a memo justifying Comey’s firing, and then on May 9 Trump dismissed Comey. Of course, on May 17 Rosenstein hired Robert Mueller to probe the Russia hoax. 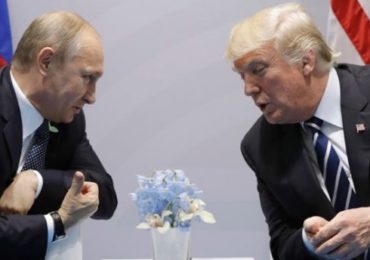 I would like to think that Trump learned the lesson that there is nothing to be gained from appeasing these Jews by smiting their enemies. They just turn around the next minute and go back t to their Jewish tricks.

So what is the second example? North Korea. Trump trashed talked back and forth with Kim Jong-un to the point where everyone seemed convinced that he was going to provoke a nuclear was in East Asia. And then, all of the sudden, there was a deal to meet with Kim. The deal included Kim agreeing to halt all testing immediately, it did NOT require America to halt its provocative military exercises on the peninsula, and it make denuclearization one of the peninsula the stated objectives of the talks.

At the time, everyone was saying that Trump scared Kim into making all these concessions with the credible threat of immediate war. I don’t think that is the case at all. The North Koreans have always been scared that America might attack at any minute (as Bill Clinton was on the verge of doing back in 1993). It was the media and the deep state that were the targets of Trumps psy-ops. By scaring the (((establishment))) that he would really go through with an all-out war, rather than just continued sanctions and ever ratcheting pressure, the didn’t put up too much of a fuss when he announced the talks. And remember, he did not go through the State Department or other government channels to set this up. Rather, he utilized the South Korean national security chief.

By the way, he offered the North Koreans what Pyongyang considers major concessions: one on one meetings between the to leaders and the prospect of a written agreement ending the Korean War and promising non-aggression. I think this was very wise.

So, if Trump strategy is the same as a year ago when he bombed Syria, we are screwed. But I think that his thinking is more in line with the positive results he got from the North Korean episode. I think he is trying to scare the (((establishment))), and the people, into thinking that he will risk a nuclear Armageddon to to avenge what may, for all we know, be a few dozen crisis actors. The Jews have been pulling out all the stops with this Russia hoax to prevent Trump from developing a relationship with Vladimir Putin, a relationship that could have very positive implications for 98% of the public. (That’s 100% minus 2%, for those unable to catch my drift.)

My prediction is that after all of this brinksmanship, there will be no military strike, but rather an announcement of a Trump-Putin summit meeting. And I will tell everyone “I told you so.” If I am wrong, well, we will probably all have more important things to worry about than any crow I would have to eat.