The Jewish lobby’s complete control over the US Government has been demonstrated once again, out in the open, with the unanimous passage of the United States-Israel Strategic Partnership Act of 2014 through the Senate.

The act, sponsored by Jewish senator Barbara Levy (married name Boxer), (D-Calif.), and senator  Roy Blunt, (R-Mo.)—who claims to be a Southern Baptist, but according to Halacha Law is Jewish, as his mother was Neva Letterman—gives Israel access to even more millions of US taxpayer cash—on top of the $3.1 billion they already receive each year.

The increase by $200 million in value of the US weapons stockpile held in Israel means that it has doubled in value over the last two years. This existence of this stockpile — known as War Reserves Stock Allies-Israel (WRSA-I) —became widely known when the Israeli army used thousands of 40mm grenades and 120mm mortar rounds during its murderous “Operation Protective Edge” against Gaza civilians.

The passing of the act through the Senate was celebrated as a great Jewish triumph in all the Jewish newspapers meant for Jews only—but has been almost completely ignored in the media which is directed for Goyim consumption.

The San Diego Jewish World, for example, reproduced a statement by the American Jewish Committee which “hailed” the passage of the bill. “The U.S.-Israel relationship today, as always, is strong, based on shared values and common goals,” Jason Isaacson, director of AJC’s Office of Government and International Affairs, was quoted as saying in the San Diego Jewish World. 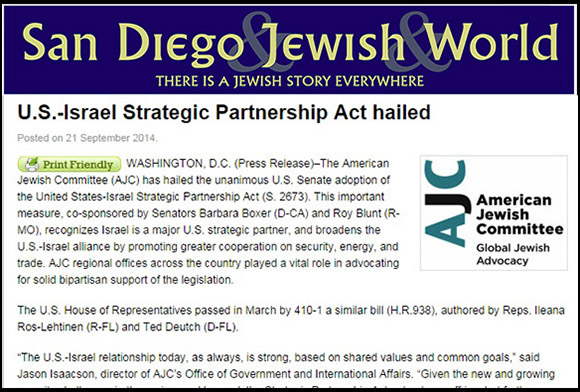 The Algemeiner—a Jewish newspaper based in New York, announced that the passage of the bill made Israel a “major strategic partner” of the US. 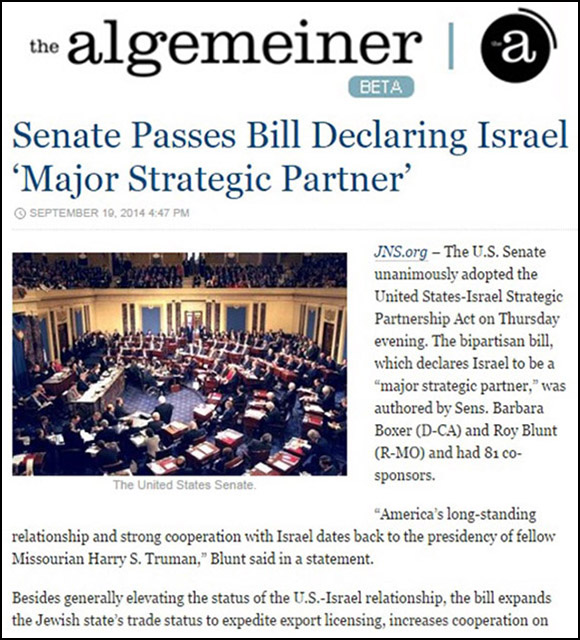 The Israeli-based Times of Israel boasted that the passage of the bill “creates new mechanisms for in enhanced energy cooperation, including the establishment of a US-Israel Center of Excellence in energy and water engineering, and supporting the development of research and development and academic partnerships.”

Furthermore, the Times of Israel boasted that the bill “includes a carefully-worded provision to encourage the inclusion of Israel in the Visa Waiver Program.

“Boxer described the bill ‘affirming Israel’s ability to participate in the visa waiver program as long as she meets existing requirements.’”

If Israel is approved for the Visa Waver program, it will be the only nation on earth to achieve this status without reciprocating the privilege—as all Americans wanting to visit Israel must still obtain a visa.

The Times of Israel also quoted the largest Jewish lobby in Washington DC, AIPAC, which wrote in a statement that “this bill will dramatically strengthen and expand the US-Israel alliance as a way to confront new threats and challenges in the Middle East.”

The Times of Israel did not stop there: it also quoted William Daroff, senior vice president for public policy and director of the Washington office for Jewish Federations,  as saying that his organization was “delighted that the Senate has come together to pass this important legislation building upon the remarkable relationship between Israel and the United States.”

“In declaring Israel a ‘major strategic partner,’ the Senate has made perfectly clear that the Jewish state is and will remain one of our strongest allies in the world,” Daroff continued.

“It is heartening to know that at times of need, the Jewish community will always be able to count on our Congressional leaders for support.”

Similar articles appeared in the Jewish Telegraphic Agency and multiple other Jewish newspapers (and of course on Senator Levy-Boxer’s Senate webpage)–but, the reader will note, somehow did not seem to make as much news in the Jewish Supremacist controlled newspapers which are aimed at non-Jewish readers.

Jewish Supremacist manipulation of the US government is not being done in secret any more. It is now being done blatantly and out in the open.

The mask of pretense has now completely fallen away—but fortunately, increasing numbers of people inside and outside America are waking up to the Zio-conspiracy.

Next Post Hear Dr. David Duke on the Enslavement of the US Congress to Israel