Yet another genetic study—this time published in the journal Nature Communications—has confirmed what informed observers have long known—that Ashkenazi (or “European Jews”) have a common heritage with Sephardic Jews and that together they form a unified group. 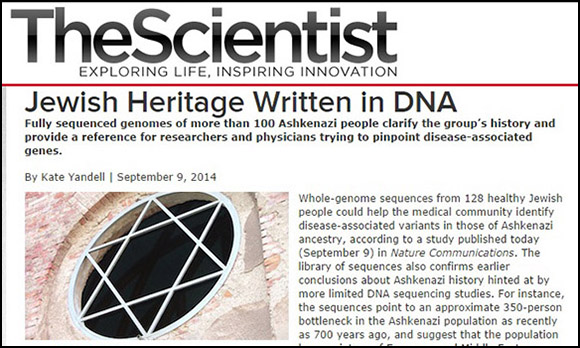 The latest study also confirms once again that the “Khazar” theory is very likely untrue, and that the vast majority of the non-Jewish genetic make-up of Ashkenazim Jews is European in origin, and not from the ill-defined “Khazar Empire.”

The study, produced by Shai Carmi, a computer science professor at Columbia University, and more than 20 mdedical researchers from Yale, Columbia, Yeshiva University’s Albert Einstein College of Medicine, Memorial Sloan-Kettering Cancer Center, Hebrew University of Jerusalem and other institutions concluded that all Ashkenazi Jews can trace their ancestry to a “bottleneck” of just 350 individuals.

According to the report, the researchers analyzed the genomes of 128 Ashkenazi Jews and compared them to those of non-Jewish Europeans in order to determine which genetic markers are unique to Ashkenazi Jews.

They found that the Ashkenazi Jews’ genetic similarities were so acute that one of the study’s researchers, Columbia professor Itsik Pe’er, told the Live Science website that among Ashkenazi Jews, “everyone is a 30th cousin.” 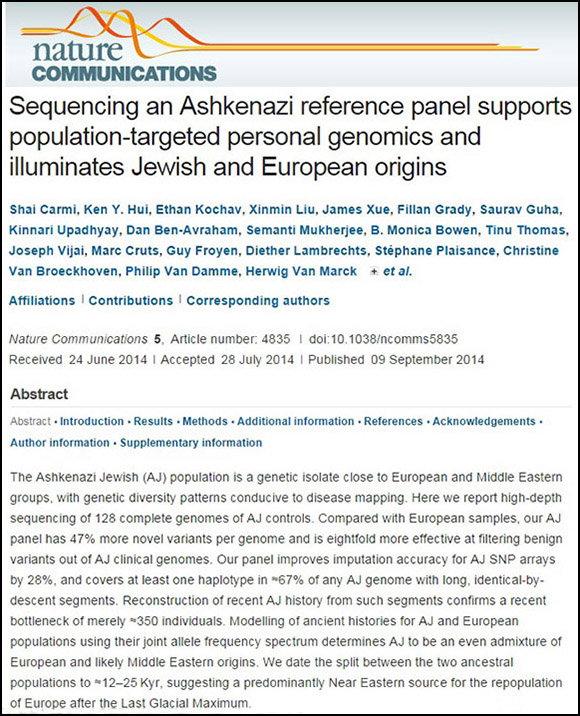 Until now, data has only been available for a small subset of common Ashkenazi DNA markers—about one in every 3,000 letters of DNA.

The study found that Ashkenazi Jews are known to have origins in the Levant, which, the Times of Israel boasted, is “smack dab in the middle of Israel.”

“An analysis of the gene database shows that the original Ashkenazi Jews were about half European and half Middle Eastern,” the report continued.

“Our analysis shows that Ashkenazi Jewish medieval founders were ethnically admixed, with origins in Europe and in the Middle East, roughly in equal parts,” said Shai Carmi, a post-doctoral scientist who conducted the analysis.

“[The] data are more comprehensive than what was previously available, and we believe the data settle the dispute regarding European and Middle Eastern ancestry in Ashkenazi Jews.”

The findings add to an already long list of similar studies, all of which confirm the genetic basis of Judaism and which refute the “Khazar theory,” which this website pointed out a while ago in Rethinking the Khazar Theory !

Furthermore, it is equally clear that those Jews who successfully assimilate and “stop being Jewish” are those who have the highest European (and non-Jewish) input—and are therefore most likely to reject the ideology of Jewish Supremacism.

I wrote about this extensively in my books, My Awakening and Jewish Supremacism. In fact, the study of behavioral or evolutionary genetics has shown that many personality traits can be inherited just as hair or eye color can be. The strict, and diligently separated Judaic communities of Europe and around the world had an enormous impact on their genetic similarity.

Here is a quote from my books with the source.

More importantly, some Jewish researchers see a degree of intermarriage as having a functional value in Gentile environments. Mark Zborowski and Elizabeth Herzog say that it serves as a bridge to the Gentile community, but one that does not threaten the Jewish core.

The peripheral area which serves as a bridge to the surrounding cultures fills several functions. It is an avenue to invasion, a buffer and a source of renewed vigor. Each impact that chips at the outer edge may serve simultaneously to strengthen the core. ( Zborowski, M., & Herzog, E. (1952). Life Is With People: The Jewish Little-Town of Eastern Europe. New York: International Universities Press.)

So, those Jews who rejected Jewish tribalism, personality traits and who attracted to the aesthetic and values of the surrounding peoples were more likely to leave the Jewish community. Once they crossed over, the Jewish community completely cut them off, and thus the genetic core of the Jewish people became more reflective the classic “Jewish character.” 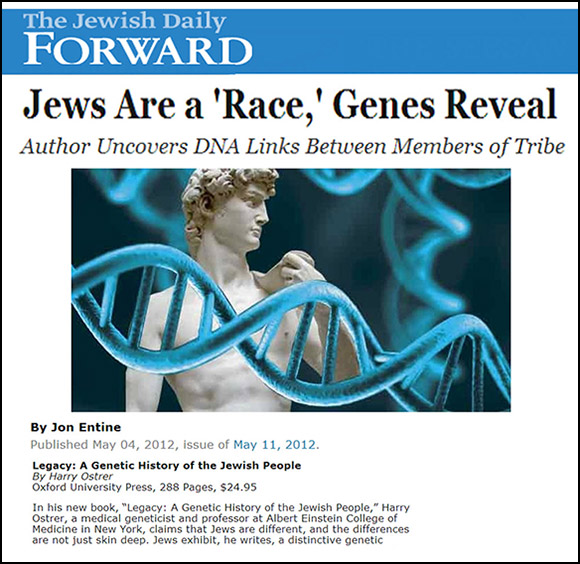 Postscript: It is common to hear people blame Jewish racism and tribalism on the Ashkenazim. But the truth is that Sephardics wrote the extremely racist Talmud. The truth is that Israel is 45 percent Sephardic and 55 percent Ashkenazi. They all share a genetic subset of Jewishness, with some difference from upward of 2000 years of separation, however there is a lot of evidence of intermarriage between these Jewish groups over the same period.

In terms of world Jewry, both Ashkenazi and Sephardi are in every major Jewish organization, together. No people on earth are more networked, and more tribalist with more organizations working for what they see as Jewish interests, the Jewish agenda and against assimilation with Gentiles.

The Sephardim in Israel are generally even more racist and extreme than the Ashekenazi and one can just look at the anti-Gentile pronouncements of the head Sephardic rabbis to document this.

They see it as an advantage for the Gentile world to see Jews as a simply a segment of the Jews such as Ashkenazi rather than understanding that Jews are united in their organizations and agenda across the world, and these organizations are both Sephardic and Ashkenazi.

Not recognizing this worldwide tribalist entity, and opposing its takeover of societal institutions through ultra-racist tribalism is the first step to the loss of of freedom, even existence because of it. — Dr. David Duke

Watch the Video Below! The Outrageous Racism of Zionist Israel
In this video you will see the ultra-racism of Israel and you will notice that the chief Sephardic rabbi of Israel, Rabbi Yosef is just as racist as any Ashkenazi. Jewish extremism is not just a Ashkenazi problem but a Jewish tribalist problem united across the world.

Next Post Hear Dr. David Duke on the Genetic Aspects of Jewish Tribalism