The Zio-controlled mass media has, of course, played along with this Jewish Supremacist hypocrisy, and not one outlet has dared point out this obvious contradiction—that recognizing Israel is fine, but recognizing Palestinian demands for their own state is “wrong.” 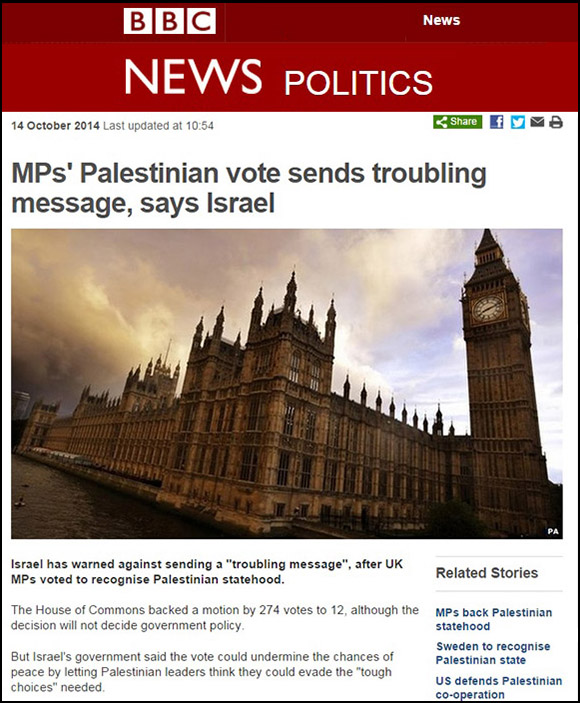 The British parliament yesterday symbolically voted to recognize a Palestinian state—if it ever was to be created—by 274 votes to 12. The vote will not decide government policy, and many of the main parties’ leading figures—including Prime Minister David Cameron—deliberately stayed away from the debate so as not to be embroiled in it.

The number of deliberate absentees from the debate can be seen when it is understood that there are actually 650 seats in the British parliament—which means that less than half actually took part in the debate and vote.

Significantly, however, during the debate, some members of parliament openly addressed the fact that the Jewish Lobby controlled US foreign policy. As reported in the Times of Israel, Conservative MP Andrew Bridgen asked of his fellow Tory MP and Vive-Chairman of the ‘Conservative Friends of Israel’, James Clappison:

The British vote followed an announcement by the new Swedish government that it would recognize Palestine is a state. Following outcry in Israel, the Swedish government toned down its position and said the recognition would take place only after peace talks.

The most significant aspect of the vote remains however the sheer hypocrisy of the Jewish lobby and the Jews-only Zionist state.

On the one hand, they demand that everyone recognize the racist, Jews-only state of Israel—even though it terrorizes, bombs and ethnically cleanses Palestinians on an ongoing basis. But at the same time, the Zionist fanatics condemn anyone who dares to suggest that the Palestinians might have the right to a state as well!

This is exactly the same as the Jewish Lobby’s position on policy matters such as mass immigration and open borders. In America and Europe, the Jewish Lobby (and their various front organizations such as the ADL, SPLC, CRIF in France, Searchlight in Britain etc. etc.) all demand open borders as “vital” for those nations, but simultaneously support Israel which has a definite closed borders and racially-restrictive immigration policy.

It is the old story: one standard for the Jewish Supremacists, another for the hated Goyim.

Next Post Hear Dr. David Duke on How the Zionist Dike is Breaking