A longtime and well-known Jewish Supremacist and ethnic activist Jonathan Freedland has been appointed executive editor of Britain’s Guardian newspaper, strengthening Jewish control over that nation’s mass media once again.

The Guardian is one of Britain’s national daily newspapers, whose online edition was the third most widely read in the world as of June 2012. Its combined print and online editions reach nearly 9 million readers. 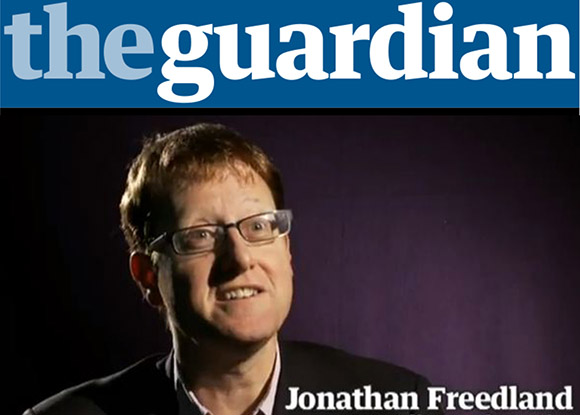 An overview of Freedland’s activities and background has been provided by the Occidental Observer’s Andrew Joyce:

Now executive editor at the Guardian, the work of Jonathan Freedland, may not be greatly familiar to readers, at least when compared to some other high-profile Jewish journalists active in the United States.

Journalism and a strong sense of Jewish identity seem to run in the Freedland blood. Jonathan is the son of Michael Freedland (1934– ), a biographer and journalist who specializes in Hollywood biographies and recently produced the scathing anti-McCarthy screed Witch Hunt in Hollywood: McCarthyism’s War on Tinseltown.

The basic thesis of Witch Hunt in Hollywood is that Sen. Joe McCarthy and the House Un-American Affairs Committee were engaged in an irrational and purely “anti-Semitic” purge of Hollywood.

The elder Freedland wrote: “For Communist read Jew. … The hearings were as (some would say more) anti-Semitic as anti-Communist. Hollywood was chosen for the attack because of the great publicity value the movie capital offered. It was also a great opportunity to get at the Jews of Hollywood.”[1]

Freedland Senior is also one of those Jews who, as Kevin MacDonald elucidates in Culture of Critique, viewed supporters of McCarthy as “intellectual and cultural primitives.”[2]

The younger Freedland began his own writing career at the short-lived Sunday Correspondent, a London newspaper backed by Rothschild Ventures, and which also launched the career of current Newsnight editor Ian Katz.

In 1990 Freedland joined the BBC, working as a news reporter across radio and television. In the summer of 1992, he was awarded the Laurence Stern fellowship at The Washington Post, serving as a staff writer on the national news section.

In what almost appears like the choreography of their careers, Freedland’s Sunday Correspondent cohort Ian Katz received the same fellowship the following year.

Freedland became Washington Correspondent for The Guardian in 1993, remaining in that post until 1997.

On his return Freedland launched an attack on British traditions and the system of constitutional monarchy, in his Bring Home the Revolution: The Case for a British Republic (1998).

One of Freedland’s primary inspirations was that he felt that, unlike most European states, America “most — though not all — of its citizens feel like they belong.”[3]

The “old” Britain, symbolized in the monarchy and out of touch with its citizens, should be annihilated.

Between 2002 and 2004, Freedland was an occasional columnist for the Daily Mirror and from 2005 to 2007 he wrote a weekly column for the London Evening Standard.

Freedland has maintained a very strong Jewish identity. In 2005 he produced Jacob’s Gift, a memoir recounting the lives of three generations of his own family.

In 2008, he broadcast a two-part series for BBC Radio 4 — British Jews and the Dream of Zion. Although it is not mentioned in his Wikipedia entry, and his Jewishness is only extremely rarely made explicit in his articles for the major British or American newspapers, Freedland is also a regular contributor to the Jewish Chronicle.

Freedland has published six books: two non-fiction works and four thrillers under the assumed name Sam Bourne. The Righteous Men, published in 2006, is a trashy religious thriller which derives from Jewish folklore and has “a faction of the Christian Church” in the “bad guy” role.

The book was later followed by The Final Reckoning (2008), a revenge fantasy about a group of so-called “Holocaust survivors” who set out to assassinate former National Socialists.

Jewish interests permeate Freedland’s journalism, most obviously in his ardent advocacy for the end of White ethnic predominance in Britain. He is highly active in promoting the demographic decline of Whites in England.

At the conclusion of the 2012 Olympics, Freedland responded to the 2011 British census, pointing out that “the country is now less white and less Christian. In 2001, white people accounted for 91% of the total population. In the latest census, that figure is down five points to 86%.”

He expressed the belief that 1948 was a pivotal year in British history, because it “saw the arrival of the Windrush, the ship bearing the Caribbean migrants who would change the face of Britain.”

He cajoles his readers into the belief he is a jolly old Anglo-Saxon with clever references to “we” and “us,” arguing that “we should love the country we have become — informal, mixed, quirky — rather than the one we used to be.”

Freedland was part of the multicultural journalistic establishment which lavished panegyrics on the Mogadishu-born runner Mohamed Farah, and insisted on the skeletal Somali’s ‘Britishness’ even when the opportunistic African moved to Portland, Oregon as soon as his profile reached a level sufficient for him to gain a US visa.

Freedland was also part of the large-scale propaganda effort to inculcate in the British the notion that because the mixed-race athlete Jessica Ennis was capable of running a certain distance at a certain speed, that mass miscegenation would be a progressive step for the nation.

In the same article, Freedland reported gleefully that “White Britons have become a minority in London, accounting for only 45% of the city’s population,” and ended with the astonishing remark that “the main story is surely that this country has undergone a radical transformation in this last decade and the ones before — and it has done so with relative peace and relative calm. No one will hand out any gold medals for that, but it’s a kind of triumph all the same.”

Just to repeat: Freedland is stating openly, in the internationally circulated Guardian, that the decline of European-descended Britons to minority status in the capital of their own ancient nation is a “triumph.”

Freedland lays special emphasis on the fact that the British have allowed this to happen without reaction, and with “relative peace and relative calm.”

But Freedland has himself been part of the ‘System’ which maintains calm among the slowly diminishing Whites of Britain. We have commented extensively on the victimization of young White girls in Rotherham by vast networks of Pakistanis, and the disgraceful neglect of these children by White enablers.

Eventually the events came to be seen as evidence of “political correctness” taken to the point of insanity, and many Whites began to grow vexed at the way in which “acceptable” discourse effectively gagged them from criticizing minority groups.

In August this year, however, Jonathan Freedland waded into the debate with a Guardian article which argued that “political correctness is blamed for Rotherham, but that betrays a contempt for those of Pakistani heritage.”

According to Freedland, the statement that Rotherham was enabled by “PC gone mad” “is itself a form of racism.”

The message Freedland was conveying boiled down to: “You might believe that it was a lack of ‘getting mad’ because of fears of accusations of racism that led to Rotherham — but if you get angry now you will still be guilty of racism.” So shut up, stay quiet, and let Britain be transformed with “relative peace and relative calm.”

Freedland is also, to use Henry Ford’s term, a “watchful agent” when it comes to remarks or actions deemed ‘anti-Semitic.’

In October 2013 he wrote another Guardian article titled “Antisemitism doesn’t always come doing a Hitler salute.” Freedland was apparently provoked to write by a Daily Mail article on the late Jewish Marxist, and father of the current Labour Party leader, Ralph Miliband. The article was headed “The Man Who Hated Britain,” and explored the bitterness with which Miliband resented the nation which had ostensibly given him refuge from the tumult of Continental Europe.

For example, aged just 17 Miliband had written: “The Englishman is a rabid nationalist. They are perhaps the most nationalist people in the world.?.?.?.?[Y]ou sometimes want them almost to lose (the war) to show them how things are.”

Miliband’s bitter hatred of the English, simply for having pride and identity, was almost pathologically irrational — he loathed it so much he was prepared to countenance a National Socialist victory.

Although the article on Miliband only mentioned his Jewishness once and in passing, and was in fact penned by the Jewish Geoffrey Levy, Freedland took the opportunity to rail against “anti-Semitism” in British society.

To Freedland “the Mail’s insistence that Miliband Sr was not only disloyal but actively hated his country fits comfortably” into a “traditional” belief that Jews are disloyal. The facts, and Miliband’s own diary entries are discarded, and Freedland instead raged: “In the anti-Semitic imagination, Jews are constantly working for some other, hidden goal.”

Freedland was apoplectic that the Mail article had highlighted Miliband’s links to Eric Hobsbawm and Harold Laski, writing that “of all Miliband’s many colleagues and comrades, the paper highlighted two who happened to be Jewish.”

But they didn’t just “happen” to be Jewish. Both Hobsbawm and Laski were the intellectual leaders of the radical Left in Britain at that time. Miliband had other colleagues, many of whom were also Jewish, but the trifecta of Hobsbawm, Laski and Miliband was the engine-room of the anti-positivist, counter-cultural Left in Britain during the 1960s. All three played the public role of secular, atheist, unattached cosmopolitans while at the same time marrying and socializing exclusively within their race and pursuing Jewish interests with every written and spoken word.

By their deeds and their works, Hobsbawm, Laski and Miliband were known. And so it is also the case with Freedland, whose works and writings epitomize the Jewish journalist.

To finish, we might once more cast an eye over Freedland’s work — his call for the dissolution of the monarchy and of the “old” Britain. We might ponder his cajoling appeal for an “informal, mixed, quirky” Britain. We might pause for reflection over his soothing palliatives over Rotherham, and his urge to maintain that “relative peace and relative calm.”

And having done so, we might think once more about the words of Hermann Goedsche in his allegory on the Jewish attack on Western values:

[3] J. Freedland, Bring Home the Revolution: The case for a British Republic, p.15.

Next Post Hear Dr. David Duke on the Harm Inflicted by Jewish Racism