A new “survey” issued by the Pew Center claims that 58 percent of American Jews are intermarrying—but this is yet another obvious case of simplistic misdirection designed to heighten Jewish solidarity.

The most obvious flaw in the “new” study is the source upon which the “calculation” was based.

According to the Jewish Telegraphic Agency, the Pew Center “results” were obtained by “a telephone survey of 3,475 Jews nationwide conducted between February and June.”

This fact alone makes the survey results completely unscientific and unrepresentative, given that there are nearly seven million Jews in the U.S. and their numbers are growing, especially among the ultra-orthodox in New York City where recent reports revealed that they are now so numerous that they are even squeezing African-Americans and others out of suburbs in the Bronx.

Furthermore, the 3,475 Jews who were telephoned are likely to be from the more cosmopolitan and secular part of the urban Jewish community.

If the survey had been conducted in a Hassidic part of New York, the results would have been completely the opposite. 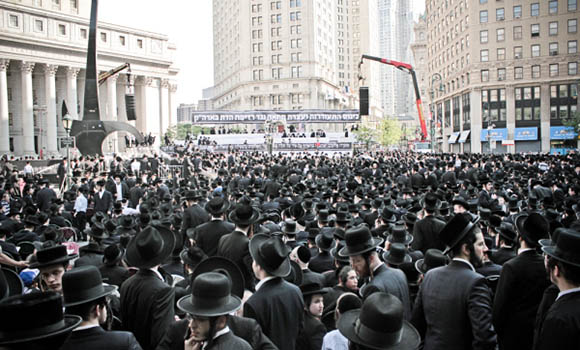 The Jewish Supremacist editors of the mass media know all these facts—and that the Pew Center “survey” is hokum—yet they are still propagating it widely.

The reason for this is that they wish to encourage their own racial solidarity, and the best way they can do this is to spread scare-stories that Jews are “about to disappear.”

Nothing could be further from the truth, as the recently released population statistics on the number of Jews in America shows.

* Although the Pew Center study was taken among liberal secular Jews, one result is worth noting: According to the survey, sixty-two percent of respondents said being Jewish is primarily a matter of ancestry and culture; 15 percent said it was mainly a matter of religion. Most Jews said it is not necessary to believe in God to be Jewish.