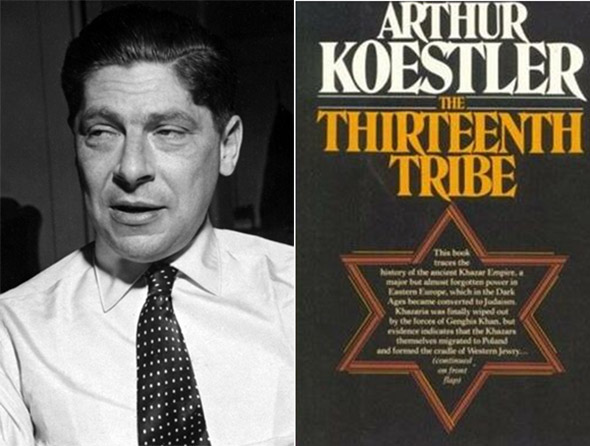 I have just discovered a quote that shows the clear ethnic Jewish motivation of the popularization of the “Khazar theory” by Arthur Koestler.Koestler, the Jewish one time Communist and radical Zionist (Jabotinsky party member), is most famous for writing the book “The Thirteenth Tribe” which is one of the most quoted “proofs” of the “Khazar theory.”
Koestler’s history is clear. Like many other Jews, he vacillated between Communism and Zionism ultimately settling on Zionism.
He was a signed up member of the Communist Party of Germany prior to World War II, supported the Jewish Bolshevik mass murderer Bela Kuhn (Cohen) in Hungary, and also ran the Secretariat of Ze’ev Jabotinsky’s Zionist Revisionist Party in Berlin.He only left the Communist International after the Hitler-Stalin Pact of 1939 (as did many other Jewish Communists after the Jews lost power under Stalin).
His official biography, written by Michael Scammell, specifically quotes him on why he wrote “The Thirteenth Tribe.”His argument was that if he could persuade people that a non-Jewish “Khazar” heritage formed the basis of modern Jews, then this would be a weapon against European racially based anti-Semitism.“Should this theory be confirmed, the term ‘anti-Semitism’ would become void of meaning,” he said.According to Scammell, Koestler told French biologist Pierre Debray-Ritzen he“was convinced that if he could prove that the bulk of Eastern European Jews were descended from the Khazars, the racial basis for anti-Semitism would be removed and anti-Semitism itself could disappear.”

There you have it The Jewish radical who wrote “The Thirteenth Tribe,” the book which more than any other that advanced the “Khazar theory,” did so because he thought it would advance the interests of the Jewish people.

The attempt to say that Jews are not a race is merely a very convenient method to avoid being called “racist”—when in fact racism and tribalism is exactly how Jewish Supremacists achieve and maintain their power.

The concept of “racism” is usually associated with the idea that a race is discriminating or oppressing another. So denying the Jews have a racial identity makes it harder to accept the ideas that many Jews use favoritism for their own and discriminate against non-Jews in institutions.

In fact, Jews are similar in genetics, mentality and personality and they certainly do promote their brethren in any field while discriminating against non-Jews. That is how they amass their power in finance, academia, government and media.

The promotion of “non-racialism,” readers will note, is only done to non-Jews. Among themselves, hardly any Jews believe the Khazar theory.

Actually the Khazar Theory is one more example of Jewish dualism:

The quote by the author of the 13th Tribe, Koestler, says it all. His motivation in writing the Khazar theory is to destroy the basis anti-Antisemitism. In other words to advance the interests of the Jewish people.

Truly, nothing more needs to said about the extensively discredited “Khazar theory” than quoting the true motivation of its biggest proponent over the last 100 years.

It is a theory which once I thought true, but now realize that it is untrue and that the theory actually only furthers the cause of Jewish racism and Zio-Globalism.

Racial unity combined with racial discrimination against not-Jews is how they amass their power. In finance, academia, government and media. That obvious fact it deflected by the argument that “Jews are not a race.” All a race is a group with a a common a common set of founder genes that distinguish the population group from others. Genetic science shows that Jews are distantly related to other Semites such as their hated enemy the Palestinians, but that are clear genetic distinctions between them that can be instantly recognized by DNA tests. Israelis in fact use DNA tests to distinguish “real Jews.”

An enormous number of studies prove the close relationship between Ashkenazi and Sephardi Jews. there was a dividing time between them in Jewish history but they have the same base of ancestors with added admixture of a small subset of northern European genes, hence the average lighter skin color than their Sephardi brothers and sisters. Jews have between 15 and 25 percent European genes and more than a millennium of extreme inbreeding.. You can read more about this in my article: “Rethinking the Khazar Theory.”

I will repeat it one more time.

The most important promoter of the Khazar Theory, Arthur Koestler, bragged to his fellow Jews of his motivation in promoting it was to defend Jews from “anti-semitism.”

What more evidence do you need?

Search the Rense radio archives on the Khazer theory and Listen to the interview of myself and Dr. MacDonald on DavidDuke.com