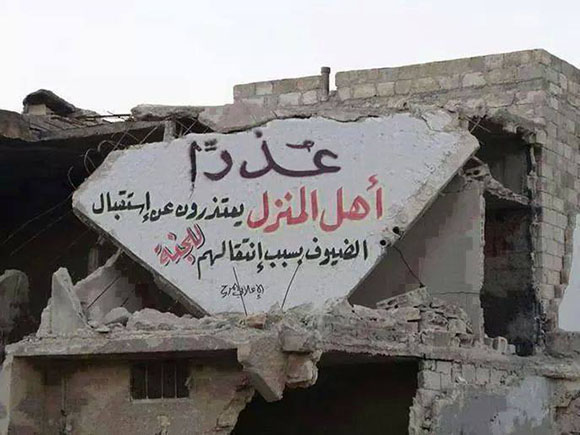 “Excuse us, the owners of this house can’t host any guests anymore, we just moved to heaven”…..that is what is written on the collapsed ruins of this house in Gaza, where a Zionist missile killed seven people, six of them children, on July 9, 2014.

The Zionist state has launched what it calls “Operation Protective Edge”—the latest attempt in its master plan to ethnically cleanse the region of “greater Israel” of all non-Jews.

The destroyed house pictured above, is just one of the nearly 800 targets in the Gaza Strip which the Israeli Defence Force has attacked over the last three days, according to the Times of Israel.

AFP reports that 25 Palestinians were killed Thursday, bringing the total number of Palestinians deaths since Tuesday to at least 76, with the figure rising continuously.

Of course, the Zio-agents in America and the west’s mass media are presenting the conflict as “poor Israel” being attacked. The reality is, of course, the very opposite of what they claim it to be.

For example, New York Senator Chuck Schumer, a prominent Jewish Supremacist supporter of the racist state of Israel, gave a fervent speech backing the Jewish state on Wednesday, declaring that there was no “moral equivalence between the actions and reactions of Israel, and Hamas and the Palestinian Authority, to the violence that has occurred there.”

In other words, in the eyes of the Jewish Supremacists—and their coreligionists who run the mass media—Israel can do whatever it likes, murder as many children as it wants, bomb and blow up houses—and that is all perfectly alright and even “justified.”

If however, Palestinians dare to do anything at all in retaliation, they are at fault and Israel is “perfectly justified” in bombing civilians in the open-air prison camp called Gaza and the Occupied West Bank.

The US State Department—quick to condemn Iran and Syria—has politely called for “all sides to deescalate,”—but has, of course, “reiterated Israel’s right of self-defence.”

Palestinian President Mahmoud Abbas has accused Israel of committing atrocities in Gaza. Mr Abbas said: “It’s genocide – the killing of entire families is genocide by Israel against our Palestinian people.”

In Britain, Prime Minister David Cameron also voiced his support for Israel and its response to what he called “appalling” rocket strikes “from Hamas militants”—deliberately creating, once again, the impression that Israel is somehow under attack from a sophisticated wave of advanced missiles instead of the highly ineffectual homemade weapons upon which the Palestinians are forced to rely to defend themselves.

The power and extent of the Jewish Lobby in America is also revealed in the special status that the racist Jewish Supremacist state has in US “aid” allocations. Israel is by far the largest recipient of U.S. foreign military aid.

In addition, the U.S contributed $504 million to the joint U.S.-Israel Missile Defense Program during the financial year (FY) 2014. If we include that number, American taxpayers give Israel $9.9 million per day, every day.

According to the CRS report, Obama’s request for Israel for FY 2015 will encompass approximately 55% of total U.S. foreign military financing worldwide.

According to the CRS report, “no other recipient of U.S. military assistance has been granted this benefit.”

Thanks in part to this indirect U.S. subsidy, Israel’s arms industry has become one of the strongest in the world. “Between 2001 and 2008, it was the 7th largest arms supplier to the world with sales worth a total of 9.9 billion.”

The United States also contributes funds for a joint U.S.-Israeli Missile Defense Program designed to thwart short-range missiles and rockets fired by non-state actors (such as Hamas and Hezbollah) as well as mid- and longer-range ballistic missiles (this refers to Iran and/or Syria’s arsenals).

The only reason why Israel gets all this “aid” is because its lobby controls Washington D.C.. No-one on the Capitol dare call them out or oppose this mass-transfer of taxpayer cash to the Zionist state—because then they will have to contend with the Jewish lobby at the next election.

So the cycle of Zio-state sponsored terror is maintained, financed courtesy of the American taxpayer.

Next Post Hear Dr. David Duke on the Zio-Terror in Gaza