June 8 was the anniversary of the treasonous Israeli attack on the USS Liberty, and it is a day upon which every freedom-loving American should stop and remember the 34 sailors who were killed and the 174 who were wounded in this Jewish Supremacist false flag operation. 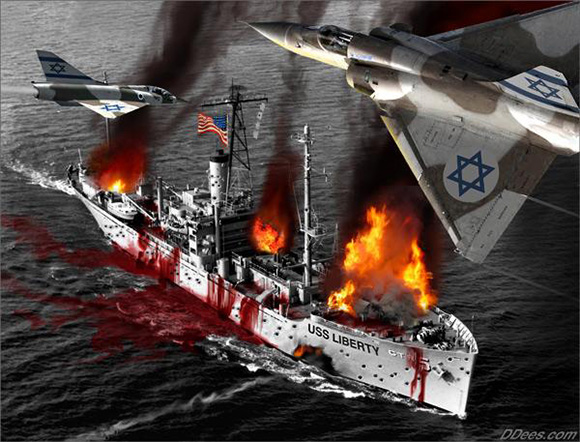 According to former Chairman of the Joint Chiefs of Staff Admiral Thomas Moorer, “Those men were then betrayed and left to die by our own government.” The survivors are still awaiting justice.

What happened to the USS Liberty?

The USS Liberty was a virtually unarmed American navy ship that was attacked by Israeli planes and torpedo boats on June 8, 1967. 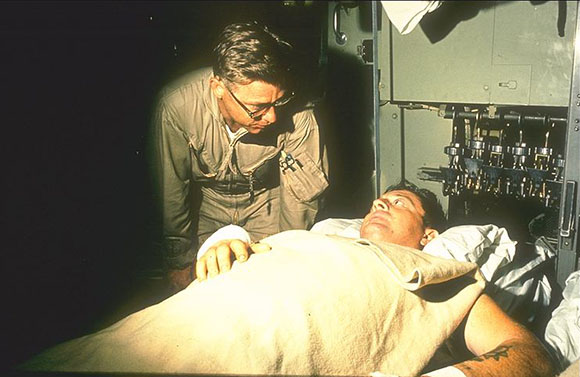 What were the American casualties?

34 American sailors were killed and 172 injured that day, a casualty rate of 70%. This is among the highest casualty rates ever inflicted upon a U.S. naval vessel. 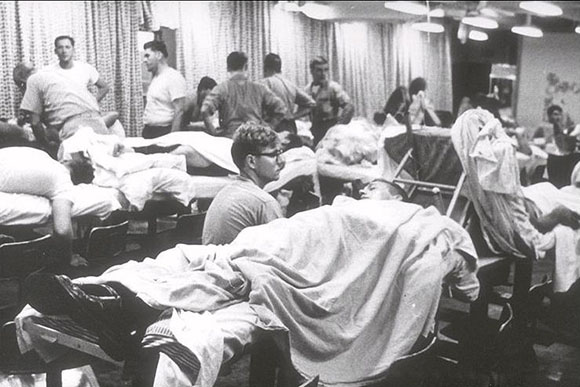 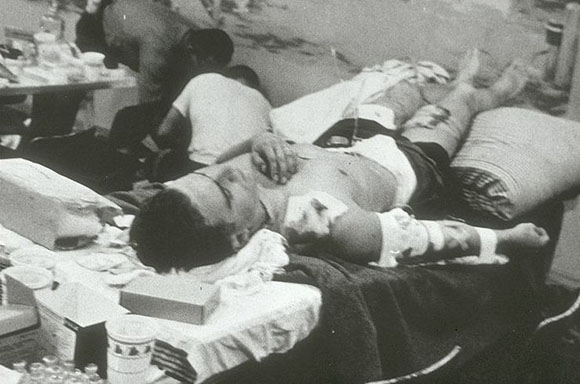 What was Israel’s explanation for the attack?

Israel claimed the attack was “a case of mistaken identity”; that they didn’t know it was an American ship.

Why would we question that explanation more than 30 years later?

The ship’s survivors were afraid to speak out in the early years because of threats of “court martial, prison or worse” if they did not remain silent. However, as time passed, they have stepped forward to say the attack was deliberate.Recently, high government and military officials have suggested that not only was the attack deliberate, but that the US government covered-up the incident. Today, an Independent Commission of Inquiry has found that Israel committed “an act of war” against the United States (see Findings of Independent Commission).In addition, the Navy’s chief attorney to the original 1967 military Court of Inquiry has issued a statement that orders to cover-up the incident were issued by President Lyndon Johnson and Secretary of Defense Robert McNamara [see Statement of Captain Ward Boston, USN, JAG (Ret.)]. 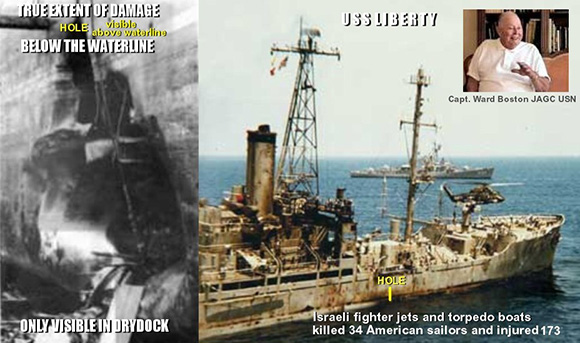 Did Israel have reason to believe the USS Liberty was an Egyptian ship?

Israel says its pilots and torpedo boat commanders confused the USS Liberty with the El Quseir, an Egyptian ship allegedly firing upon its forces in the Sinai. But there was no Egyptian naval bombardment that day; nor did the El Quseir (an unarmed 1920s-era horse carrier out of service in Alexandria) bear any resemblance to the Liberty.

Isn’t it difficult to identify a ship if you’re in an airplane?

In 1967, the USS Liberty was the most sophisticated intelligence ship in the world, with dozens of large antennas, including a large moon-bounce “satellite-dish” mounted on a tall structure near the stern. It may have been one of the most easily identifiable ships of any navy in the world. With a displacement of 10,000 tons, it was four times the size of the antique Egyptian transport it is claimed to have resembled. Freshly painted, the Liberty carried large white identification numbers on its bow. Egyptian hull numbers are painted black.

Doesn’t Israel say that the Liberty flew no flag?

According to American survivors, a 5-by-8 feet American flag was hoisted early that morning and was flying all day until it was shot away by attacking aircraft. Within several minutes, it was replaced by the giant 7-by-13 feet holiday ensign, which flew for the duration of the attack.

Could Israel have thought the ship was in a war zone, acting suspiciously?

According to surviving crewmembers, Israeli reconnaissance aircraft closely studied the Liberty over an eight-hour period prior to the attack, one flying within two hundred feet of the ship. At all times the Liberty was a clearly marked American ship in international waters, proceeding at a speed of only 5 knots. 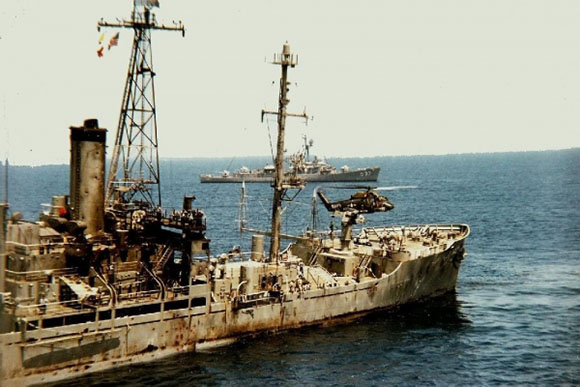 What was the weather like the day of the attack?

Weather reports confirm that it was a clear day with unlimited visibility. The Israeli reconnaissance planes could have seen the Liberty’s crew sunbathing on the upper decks just before the attack. The flag was flying in a 12-knot breeze for most of the afternoon.

Doesn’t Israel say they ended the attack the minute they saw someone hoist an American flag?

The Israeli attack by combined air and naval forces spanned two hours — as long as the attack on Pearl Harbor. The air attack alone lasted approximately 25 minutes: consisting of more than 30 sorties by approximately 12 separate planes using napalm, cannon, and rockets which left 821 holes in the ship. Following the air attack, three Israeli motor torpedo boats torpedoed the ship, causing a 40’x 40’ wide hole in her hull, and machine-gunning firefighters and stretcher-bearers attempting to save their ship and crew. More than 3,000 machine-gun bullet holes were later counted on the Liberty’s hull. After the attack was thought to have ended, three life rafts were lowered into the water to rescue the most seriously wounded. The Israeli torpedo boats returned and machine-gunned these life rafts at close range. This was followed by the approach of two large Israeli Army assault helicopters filled with armed commandos carrying what appeared to be explosive satchels (they departed after hovering over the ship for several minutes, making no attempt to communicate).

Did the Liberty send out a distress signal when it was under attack?

Throughout the air attack, the Liberty’s radio operators found it difficult to transmit a distress signal because the attacking Israeli aircraft jammed all five of the Liberty’s American, not Egyptian, emergency radio channels. However, a call for help did reach the U.S. Navy command in the Mediterranean.

What was the American response time?

Although American carrier-based air support was only 40 minutes away, help did not reach the USS Liberty for seventeen hours. Navy fighters were launched from the aircraft carriers America and Saratoga while the Libertywas under attack. However, they were quickly recalled by the White House. This is the only instance in American naval history where a rescue mission was cancelled when an American ship was under attack.

Why would Israel have deliberately attacked an American ship?

Israel’s motive for launching the attack has never been determined with certainty. This is why an impartial investigation is critical. One hypothesis is that Israel intended to sink the ship (with no survivors) and blame Egypt because this might have brought the United States into the 1967 war. Another hypothesis is that the Libertywas gathering intelligence about activities that Israel did not want revealed. Examples might include the massacre of Egyptian prisoners of war that was then occurring in the Sinai, as well as Israel’s impending invasion of Syria.

Has the incident been investigated in the past?

Some people say that there have been “thirteen official investigations” all concluding the attack was a case of mistaken identity. Several were conducted by Israel. Upon examination, however, every one is based upon the conclusions of the original 1967 US Navy Court of Inquiry, which accepted the Israeli version, but which has been exposed and discredited by its chief attorney as a cover-up.

Did the surviving crewmembers testify in the other investigations?

In not one of these “investigations” were any of the Liberty’s surviving crewmembers permitted to publicly testify.

Why would the White House prevent the rescue of an American ship?

This is, perhaps, the most disturbing question arising out of Israel’s attack. It is why there needs to be a thorough investigation of the actions taken by the White House and the Secretary of Defense. Why did they order the recall of the planes that had been sent to rescue the Liberty? Why did they order that the survivors be silenced and the true facts be withheld from the American people?

Why is this significant for the American people 36 years later?

We have a duty to the crew of the USS Liberty, while the survivors are still alive to testify, and while the perpetrators can be brought to justice. Furthermore, any policies that paralyze our elected leadership to the extent they become unable or unwilling to protect Americans and American interests, endangers not only the safety of all Americans but also the national security of the United States.

Doesn’t America have a special relationship with Israel?

No nation or people should be above the law; nor should American interests be subordinated to the interests of any foreign nation. Those Israelis responsible for ordering the attack and the resulting murder of American sailors must be held accountable for their actions. 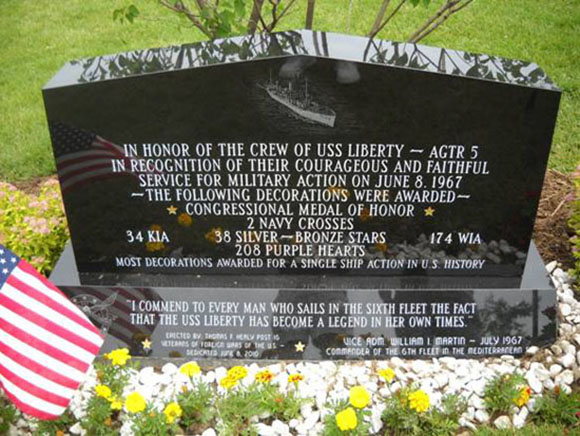 Original article at the Council for the National Interest.

There is detailed evidence from Liberty crewmen and other military and intelligence personnel that the Israeli attack was intentional. Numerous extremely high US military, intelligence, and diplomatic officials have espoused this view. Among them are:

Richard Helms, Director of the CIA;

Paul C. Warnke, Undersecretary of the Navy and later general legal counsel to the Department of Defense;

George Ball, under secretary of state;

Dwight Porter, US Ambassador to Lebanon;

In 2003 the Moorer Commission, an independent commission headed by Admiral Moorer, reported on Capitol Hill: “There is compelling evidence that Israel’s attack was a deliberate attempt to destroy an American ship and kill her entire crew.”

The Moorer report went on to state, “In attacking the USS Liberty, Israel committed acts of murder against U.S. servicemen and an act of war against the United States.”

Next Post Hear Dr. David Duke on the Zionist Supremacist Attack on the USS Liberty