A gaggle of Jewish Supremacists—one masquerading as the “American” ambassador to Israel—have demanded that the world recognize the right of Israel to be a Jews-only state in return for a “peace deal” with the Palestinians—while simultaneously demanding of everyone else that they be as mixed and as cosmopolitan as possible. 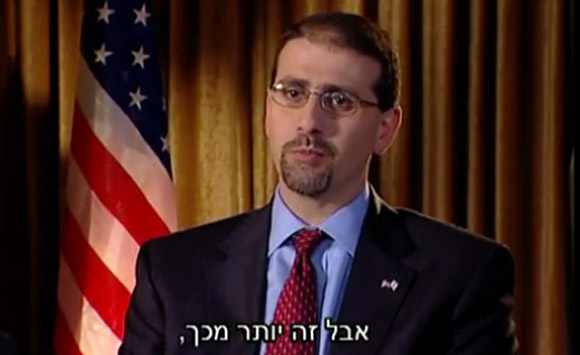 In the latest outrageous display of chutzpah, the “US” ambassador to Israel, a Jewish Supremacist “single loyalty” individual by the name of Dan Shapiro, was quoted by the Times of Israel as saying that the “framework peace deal currently being negotiated by US Secretary of State of John Kerry will include Palestinian recognition of Israel as the nation state of the Jewish people.”

According to the Times of Israel, this is in line with Israeli Prime Minister Benjamin Netanyahu’s insistence that Palestinian Authority President Mahmoud Abbas “recognize Israel’s Jewishness” which has been a sticking point in negotiations, because Palestinians say that agreeing to such a demand that would tacitly do away with Palestinian hopes for a “right of return” for refugees and their descendants.

Shapiro sounded confident that, in a final-status agreement, the Palestinians — indeed, the entire Arab world — would have to accept that Israel was a Jewish state and would remain as such.

“I assume that under the framework that we’re currently preparing — that we’ll see that recognition of Israel as a Jewish state, as the nation state of the Jewish people” he said.

“And in the end, we’ll need to know that this is the end of the conflict, and that’s one way of verifying that… that everyone in the region and all of [Israel’s] neighbors will accept that there is a nation state of the Jewish people here, in the Jewish homeland.”

This demand for recognition of Israel as a Jews-only, ethnically-pure state, a “homeland for the Jews” is in direct contradiction to the well-established position of the Jewish lobby in America and elsewhere, which campaigns full-time to “promote diversity,” mass immigration and globalism in every other nation on earth.

Indeed, any nation which dares to assert to itself anything near the right which the Jewish Supremacists demand for their country—is subjected to sanctions, boycotts and even ultimately the threat of invasion or war.

Once again, it is one rule for the Jewish Supremacists, and another for all the Goyim.

Previous Post “US” Secretary of State Kerry-Cohen and Family: “We are Jews”