A lengthy discussion in a major Orthodox Jewish news site concerning the teachings contained in the Talmud as they might regulate the practice of donating blood has revealed the full depth of hatred towards Gentiles which exists in that book.

The article, penned by Rabbi Aryeh Lebowitz, who serves the Beis Haknesses synagogue in North Woodmere, Long Island, discusses the various teachings by leading rabbis, as contained in the Jewish holy book, is titled “Blood Donations According to Halacha” and appears on the “Torah Musings” website. 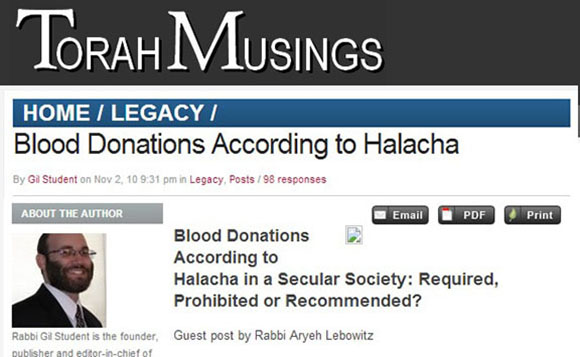 The discussion which it contains of the various laws concerning the relations between Jews and Gentiles reveals the unimaginable hatred for Gentiles contained within that book.

For example, in the discussion on whether Jews should even give blood to Gentiles, the article explains that Jews are obligated only to save other Jews and not Gentiles:

Several contemporary poskim have noted that Jews must participate in any life saving procedure with negligible risk in order to save a fellow Jew (Nishmas Avraham IV: Even Haezer:80, Responsa Shevet Halevi V:219),

(“Poskim”” is Hebrew for the term in Jewish law meaning “decider”—a legal scholar who decides the Halakha in cases of law where previous authorities are inconclusive or in those situations where no halakhic precedent exists).

In contrast to this law, the article goes on to discuss the official attitude towards Gentiles in need:

It should be noted, however, that traditional rabbinic sources point to a clear distinction between our obligation to save the lives of fellow Jews and our attitude toward saving the lives of non-Jews. Specifically, the aforementioned imperative to actively save lives explicitly refers to Jewish lives (לא תעמוד על דם רעך). When it comes to saving non-Jewish lives Chazal (Sanhedrin 57a) were much more ambivalent, and ruled that non-Jews should neither be thrown into a pit nor saved from a pit into which they are thrown.

Furthermore, the article reveals, the Talmud also specifically prohibits Jews from breaking their Shabbat (the Jewish day of rest and seventh day of the week) in order to help non-Jews:

Note that this specifically refers to non-Jews—it is, as the article points out, perfectly acceptable to Jews to break their Shabbat to save a fellow Jew.

Rabbi Lebowitz acknowledges that this law is blatantly anti-Gentile, and even points out that it if it becomes widely-known, it is likely to cause anti-Semitism:

Though the Gemara (Avoda Zara 26a) reasons that non-Jews will surely understand that we may only violate the Shabbos for the sake of those who observe Shabbos, Rav Moshe points out that such arguments are not very likely to be accepted by the Gentile society in general. Rav Moshe concludes by emphasizing that there is no need to prove from earlier sources that one may violate biblical prohibitions to save Gentile lives because it is “abundantly obvious”. It would seem that similar considerations may exist with respect to donating blood to save non-Jewish lives. A communal refusal to do so is likely to be met with strong criticism and severe anti-semitism.

In other words, the article says, Jews may be allowed to break this law of not helping Gentiles, not because the latter are in need (as any normal person would), but because failing to do so will cause “severe anti-semitism.”

The converse side to this argument is therefore that if there was no danger of Gentiles being angry because of a Jewish refusal to help, there would be no offer of help.

While discussing whether the Talmud forbids Jews from having their blood drawn, the article also reveals that the Jewish holy book allows Jews to violate Talmudic laws under certain conditions—but never allows a Jew to help a Gentile to break any Jewish law!

While the gemara (Avoda Zara 6b) rules that one may not aid a Gentile in violating a prohibition, the prohibition of wounding does not seem to be one of the seven Noahide laws.

(Noahide laws are the Talmudic rules based on the Seven Laws of Noah).

In a further discussion on whether Jewish blood should even be allowed to go to Gentiles, the article reveals that the Talmud forbids Jews to even give anything for “free” to Gentiles!

A second potential prohibition associated with donating blood is לא תחנם (Devarim 7:2) which the Gemara (Avoda Zara 20a) understands to include a prohibition to give “free gifts” to Gentiles. Obviously this consideration would be a non-factor if the donation were going to a fellow Jew.

The article confirms that the prohibition on “free” gifts to Gentiles is also contained in the Shulchan Aruch (Yoreh Deah 151:11 as explained by Shach ibid 18) and that this prohibition applies to “all Gentiles.”

Importantly, the article says, another part of the Talmud states that the only time a “free” gift can be given to a Gentile is when it is assured that the Gentile will give something back—in other words, it is not even “free.”

Second, the Turei Zahav (Yoreh Deah 151:8) rules that if one knows the Gentile to whom he is giving the gift, it is permissible because it is not considered a “free” gift. When there is a reciprocal relationship one can rest assured that the generosity of giving a gift will be repaid by the Gentile in one way or another.

It is important to bear in mind that these laws only apply to Gentiles, not to fellow Jews.

Finally, and most shocking of all the article quotes another leading rabbi as saying, after reading parts of the Talmud, that Jews are not allowed to give their blood (their “soul”) to a non-Jew because a non-Jew’s veins are “impure” and that Jewish blood will “cry out” from that Gentile’s veins:

Rabbi Menashe Klein (Responsa Mishnah Halachos IV:245), after discussing various halachic considerations associated with blood donation, suggests that it is “inappropriate” for a Jew to give of his soul (blood is equated to the soul in Judaism) which is sanctified as Jewish blood and allow it to flow through the impure veins of a Gentile. Rabbi Klein poetically refers to the blood of the person “crying out” from the Gentile veins.

These same Jewish Supremacists would be howling “anti-semitism” and “racism” from the rooftops—but because it is the Talmud, these outrageous hypocrites are silent—and will even cover it up in their mass media.