The Jewish Neocon takeover of “Conservatism” is typified by Jonah Goldberg. He is Senior Editor of National Review the most venerable “conservative publication in America. In fact, NeoConservatives are not real conservatives, their movement was founded by dedicated communist worshippers of Leon Trotsky, the first head of the Red Army, a Jew  who killed millions of Christians in Bolshevik Russia

I know that this sounds absolutely crazy, but it is absolute fact.

Neoconservativism supports open borders and the destruction of the founding European American majority of America, which is in itself a demographic armageddon for every true conservative and constitutional principle. It is pro-globalist and interventionist rather than pro-American. It is dedicated to Israel and the perceived interests of American and world Jewry and is directly opposed to the values and interests of America, Europe and the Western World. It’s policies are presiding over the death of America and the death of Europe and the entire Western World! 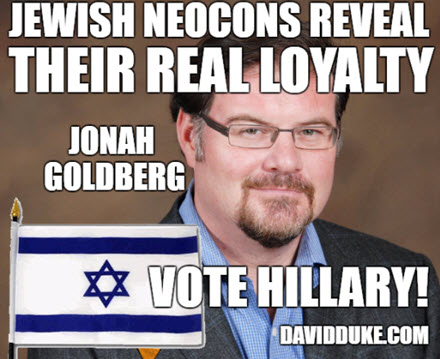 Today, Goldberg in the National Review made it clear in his support of Hillary Clinton against Republican Donald Trump.

We know what we’ll get from Clinton when it comes to foreign policy. She’s an internationalist interventionist with more muscular instincts than Barack Obama…

There you go. He loves Clinton because she’s an internationalist. He hates Trump because he believes in America First!

The virulent Jewish Tribal hate and fear of Donald Trump has exposed their Communist-Jewish founders treason against true Conservatism, the Republican Party and America.

NeoConservatism was created by self-proclaimed Jewish Trotskyite Communists. Leo Strauss was NeoConservatism’s founding father. All of his most important students were also Jewish Trotskyites who realized that Communism wouldn’t sell in America, so they decided to take over the conservative movement just as they were the driving force behind the takeover of the worldwide progressive movement. These NeoConservatives are dedicated only they consider to be the interests the Jewish people, Israel and policies that serve their tribal interests.

For those of you unaware, Leon Trotsky’s real name was Lev Davidovich Bronstein. The Jewish Encyclopedia calls him one of the greatest Jewish generals of all time. Trotsky (Bronstein) was Jewish, Lenin self-identified himself as a Jew (documented by his own sister), the other top leaders of early communism were Radek, Kamenev, Sverdlov and Zinoviev, all Jews.

The heads of the most murderous killing organization in all history were  a succession of Jewish mass murderers culminated by the Jew Genrikh Yagoda —  who the largest website in Israel YNET NEWS, identifies as one of the worst mass murderers of all time.

For those of you unaware of the deep connections of Communism and Zionism, note that the Jewish communist Bernie Sanders was an elector on the ballot for the Socialist Workers Party presidential candidate, Andrew Pulley. The SWP is an openly Trotskyite, Communist party. Sanders as a young Jewish communist was also a dedicated Zionist who joined a Stalinist Communist Kibbutz in Israel.

NeoConservatives such as Richard Perle and Paul Wolfowitz, also former Trotskyites, along with the Zionist-leftwing mass media like the Jewish NY Times and Jewish Washington Post, lied America into the catastrophic Iraq War which has led to damaging hundreds of thousands of our brave young men as well as killing millions of people of other nations — and the waste of about 4 trillions dollars of American taxpayer’s money.  That is why the neo-Conservatives hate Donald Trump!

Donald Trump recently in his foreign policy speeches and interviews talked about these insane wars and the four trillion dollars stolen from the American people and the loss of American lives for NOTHING. In fact, it resulted in much worse than nothing, for harmed hundreds of thousands of our brave men and also caused global hatred of America as well as the rise of horrific terrorism such as ISIS.

They have supported Israel even after this Zionist state was caught red-handed in terrorist bombing attacks against America in the Lavon Affair, which Israel had to publicly admit was done by their government. They also attacked, killed 43 and wounded 173 of our young men in a terrorist attack upon the USS Liberty. In addition, our Secretary of Defense proved that the Israeli spy Jonathan Pollard did more damage to America than any other spy in American history. But the Jewish controlled American media and political establishments lets these nation that has committed terrorism and treachery against, face no consequences.

The Jewish NeoConservative NeoCommunists also, just like their NeoCommunists brothers in the Progressive movement have supported open borders for millions of legal immigrants as well non-enforcement of our laws against illegal immigration. This was a purposeful policy to change the demographics of America from our 90 percent traditional European people to the point where the people whose forefathers created America would become a minority in their own nation. They have led a demographic Armageddon that is now destroying the heritage of America and leading us to cultural and economic destruction.

Watch this Great Trump Parody of the movie 300! 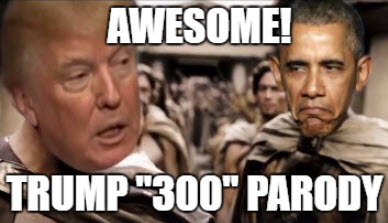 Trump, by vowing to enforce our laws and build a wall, has drawn a line in the sand against the Jewish extremists who control both the Democratic and Republican Oligarchy.

Trump also has attacked the Jewish banking giants like Goldman Sachs, has called for an audit of the FED, which has been 100 percent controlled by Zionist Chairmen and Vice-Chairmen over the last four decades, and has called out the Jewish money masters who completely dominate political fundraising of the both the Republican and Democratic Party.

He has also squarely gone against the Jewish globalist establishment by opposing the destruction of American jobs and businesses with the globalist trade policies of the United States.

Jewish NeoCommunists control the funding and running of the largest conservative think tanks and publications such as National Review, whose senior editor Jonah Goldberg has been a leader in the Never Trump Movement. The Jewish Kristols of the Weekly Standard are a family with a long history of communism. Also, Commentary, founded by the American Jewish Committee and led by Norman Podhoretz Poderertz is another leading NeoConservative publication.

Just do a search in Google news of anti-Trump and you will find the overwhelming bulk of both conservative and liberal attacks on Trump, come from this 2 percent of the American population. And the few Gentiles taking part in the lynching of Trump comes almost exclusively  from those who made their careers in complete sycophancy to Jewish Zionists.

These supposed conservatives now tell fellow Republican conservatives that it would be better for Hillary to become President than Trump. What else do you need to finally understand that these Jewish racists have no loyalty to anything but to their tribe?

They obviously perceive that Donald Trump threatens their efforts to destroy the European people and turn our nations into populations that will destroy every vestige of European Western Civilization. Israel Uber Alles.

However there is a silver lining to all of this.

Time and Newsweek had to put out a pathetic “refutation” of these facts of the almost universal Jewish animosity toward Trump by quoting two Jews who said they would probably vote for Trump.

The only county Trump lost in NY State was the highest Jewish populated one: Manhattan, the center of Jewish economic power in America.

The exposing of Jewish racism and the NeoConservative treason of the Jewish controllers of the Republican elite is one of unexpected benefits of the Trump campaign.