The Jewish Tribalist oligarchs of Media, Money and Politics admit that American Democracy is a big fat lie. In an article in the Jewish NY Times, America’s most powerful newspaper, they admit that the bosses have the ultimate power in selecting candidates for the most important elected office in America: the President of the United States.

“WASHINGTON — When it comes to nominating presidential candidates, it turns out the world’s foremost democracy is not so purely democratic.”

It goes on to state:

“In Nashville a week ago, supporters of Donald J. Trump accused Republican leaders of trying to stack the state’s delegate slate with people who were anti-Trump. The Trump campaign posted the cellphone number of the state party chairman on Twitter, leading him to be inundated with calls. Several dozen people showed up at the meeting at which delegates were being named, banged on the windows and demanded to be let in.”

This is a direct referral to the Tennessee Republican primary, where voters overwhelmingly chose Donald Trump to be their candidate for President of the United States, but the delegates selected for Trump are not really for Trump, but rather under the control of the Party bosses. So, after the first ballot they will actually vote for anyone else they feel is anti-Trump, completely against the wishes of the voters who overwhelmingly voted for Donald Trump to be President.

The NY Times puts it this way:

“But the sense of futility is building among supporters of Mr. Trump and Mr. Sanders, both of whom have strong appeal with people who already believe that a rigged political system leaves them voiceless and disenfranchised.”

And it is not just the Republican Party. It is true in the Democratic Party as well, where backers of Senator Bernie Sanders are bewildered at why he keeps winning states but cannot seem to cut into Hillary Clinton’s delegate count because of her overwhelming lead with “superdelegates.”

In an article in Salon, Jewish writer Steven Rosenfelt admits that not only is the process completely against the will of the voters, but that the biggest media intentionally covers up this corrupt and completely undemocratic process.

“The mainstream media is getting this wrong, because they don’t want upset voters.” The mainstream media and many scholars are reluctant to say this, Haugland said, because it would mean that the primaries and caucuses were advisory, not official in a legally binding way. (The New York Times ran a Sunday story alluding to this frustration.) But that is true because the Republican Party is a private body, even as it nominates candidates for public office and uses the government’s election apparatus.

“First of all, we owe nothing to the voters in the primaries—we as a party,” Haugland said. “We don’t owe them anything except to maybe pay attention to how the vote turned out for whatever reason. We have no duty or obligation to do anything according to those votes.”

So Americans must understand that the Jews contribute the overwhelming bulk of the money in both the Republican and Democratic Party. They are the biggest players in the unlimited spending by Superpacs in favor of their own preferred candidates and hundreds of millions of dollars in vicious attack ads against those who might be a threat to the Jewish agenda. 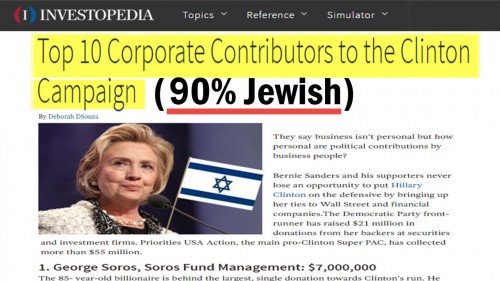 The biggest Superpacs in the Republican race backed the failed candidacies of Bush and Rubio. For example the well-financed campaign of Marco Rubio was overwhelmingly fueled by Jewish billionaires Paul Singer and Norman Brahman, and at least nine of the 10 biggest Superpac donators to Clinton were Jewish extremist bankers and media moguls, starting with Jewish tribalist Leftists (1&2) George Soros and Haim Saban. These Jewish billionaires have already combined to give their favorite shiksa 30 million dollars, and they’ve just got started! Here is the list:

The 85- year-old billionaire is behind the largest, single donation towards Clinton’s run. He has also been vocal about his disdain for Trump. He donated to PUA Super PAC.

Media mogul Haim Saban has been a long-time friend of Clinton, and his wife Cheryl sits on the board of the Clinton Foundation. They both donated separately to PUA Super PAC.

The President of this Connecticut-based hedge fund donated to PUA Super PAC.

Sandler and his late wife Marion purchased Golden West Savings and Loan in 1963 and created the Golden West Financial Corporation. In 1968 the corporation went public. The company was acquired by Wachovia Bank in 2006, and coinciding with the subprime lending crisis, the merger was often given as an example of financial overreach. The foundation has supported the Center for Responsible Lending, ProPublica and the Centre for American Progress.

Eychaner is the founder and chairman of Newsweb, a Chicago media company.He donated to PUA Super PAC and Clinton’s campaign committee. (Note from editor: Although Eychaner is featured in numerous articles about Jewish donors, including this one from the Times of Israel, his Wikipedia page lists him as Methodist.)

CEO Katzenberg and co-founder Steven Spielberg both donated to the PUA Super PAC.

Shaw founded the hedge fund but currently focuses on his role as Chief Scientist at D.E. Shaw Research. He donated to PUA Super PAC.

The Chairman of BLS Investments and life-long supporter of the Democratic Party, Schwartz donated to the PUA Super PAC.

It also goes without saying that the biggest single corporate contributor in the last few general elections for President was the world’ largest criminal Jewish predator bank, Goldman Sachs.

Of course, money plays a huge role in political success, but perhaps even more important is the role of the mainstream, establishment media which has been on a nonstop, vicious smear campaign against Donald Trump.

Third, Jews have hugely disproportionate influence in critical positions of both parties and the establishment positions of power, and they are overwhelmingly tribalized to be attuned to the Jewish establishment organizations agenda, as illustrated by the very Jewish Jake Tapper following the ADL directive to attack Donald Trump, suggesting that he had ties to me, and even more obliquely to the KKK, which was headlined in thousands of media spearheaded by the Jewish media behemoths.

But even if the voters, in spite of all the media bias and the massive spending against Trump, vote for him, the Jewish-bought party establishment then rigs the convention to stymie the will of the people.

This is all one more great positive of the Trump campaign, no matter what the outcome of the process this election. People are learning who really controls America and how America is not free.

No true American who believes in liberty can anyone disagree with the underlying truth: It is time to throw out the tyrants who rule America! It is time for revolution!

Next Post Dr. Duke and Rev. Dankof: Jewish Media Oligarchs Boast that They, Not the Voters, Rule America!