Today Dr. Duke had Daily Stormer journalist Eric Striker as his guest for the hour. They talked about a plan drafted by one of the parties in Israel’s coalition government to annex the whole of the West Bank and ethnically cleanse it of Palestinians. If that were the extent of Jewish plans, then one could simply describe Zionism as a genocidal form of nationalism. But the fact is that Zionism also is a movement to bring the entire world under Jewish supremacism, thus true nationalists around the world are viewed as enemies of Zionism. 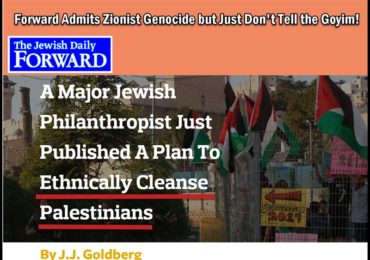 They went on to discuss Jewish identity. Jews often do NOT self-identify as whites, but rather simply as Jews, which are separate from whites. Even if a Jew DOES identifies as white, they ALSO have a Jewish identity that Jewish identity is likely to be stronger and determine their attitudes. The fundamental issue is that the self-perceived interests of Jews (massive non-white immigration, multiculturalism, wars, promotion of white guilt) are diametrically at odds with the interests of whites, and this more than anything makes them separate from whites.

It is always a great show when Dr. Duke and Mr. Striker have a conversation. Please share this show widely.