In what seems to be an ever-increasing cycle of extremist insanity, one of the top Jewish “donors” to political campaigns in America has called on the US to drop atom bombs on Iran.

Jewish billionaire and Las Vegas casino owner Sheldon Adelson, who spent $150 million trying to buy the most pro-Israel candidate in the recent US presidential election, has announced that the United States should detonate a nuclear bomb in the Iranian desert to “display toughness” and should threaten that the next bomb would fall on Tehran. 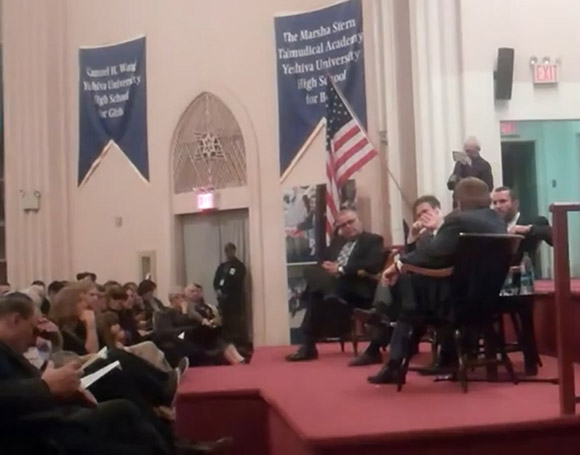 Speaking before a capacity Jewish audience at New York’s Yeshiva University, Adelson asked “What are we going to negotiate about?” with reference to Iran.

“What I would say is, ‘Listen. You see that desert out there, I want to show you something.’ …You pick up your cellphone and you call somewhere in Nebraska and you say, ‘OK let it go.’ And so there’s an atomic weapon, goes over ballistic missiles, the middle of the desert, that doesn’t hurt a soul. Maybe a couple of rattlesnakes, and scorpions, or whatever. And then you say, ‘See? The next one is in the middle of Tehran.’ So, we mean business.”

The title of the forum where Adelson made his comments was, significantly, entitled “Iran, Assimilation and the Threat to Israel and Jewish Survival.”

It was moderated by orthodox Rabbi Shmuley Boteach, who, according to the Times of Israel, is nicknamed “America’s Rabbi” because he is famous for “promoting Judaism and Jewish values through mainstream American media.”

Adelson’s comments—and the very nature and title of the conference where he spoke—reveals precisely how Jewish Supremacists see themselves in terms of America, Israel and the world.

Firstly, they are primarily concerned with Jewish survival above all else. This is why the conference was about the “threat” of assimilation and “Jewish Survival.”

Secondly, they put Israel’s interests above all else—and especially before America’s.

Thirdly, it shows that they regard America as merely a tool to enforce Jewish Supremacist policy in the world: in this case, they actually want the US to nuke Iran based purely on the easily disproven Zionist lies about Iran’s nuclear energy program.

Fortunately, the Jewish Supremacists like Adelson who want to nuke Iran will at this stage probably not get their way—but the open demand for such action reveals exactly how they think about it, and their naked desire to exterminate anyone who dares to opposed Zionist Supremacism and what they see as their God-given right to rule over the despised Goyim.

Can the reader imagine what the reaction of Jewish Supremacists such as the SPLC, the ADL etc. would be if a leading European-American businessman  such as Bill Gates or Jeff Bezos had to speak at a public conference calling for opposition to assimilation with Jews?

Yet Adelson, who is the single largest contributor to American politics, and one of the most well-known people in the world,  can speak at a conference opposing assimilation with gentiles without a squeak of protest from the Jewish Supremacists and their controlled media.

Can the reader imagine what the reaction of Jewish Supremacists such as the SPLC, the ADL etc. would be if a leading European-American had to call for the nuking of Israel if that nation refused to abandon its nuclear weapons? (which are real, ass opposed to Iran’s.)

Yet Adelson, who is the single largest contributor to American politics, and one of the most well-known people in the world, can speak at a conference calling for the nuking of Iran without a squeak of protest from the Jewish Supremacists and their controlled media.

This fact tells the reader all he or she needs to know about who controls the media—and that the Jewish Supremacist power structure has to be broken if America is ever to be free.