Commentary — The leaders of the “Zionist Union,” a union of the Israeli Labor Party and the remnants of the Kadima party that still follows Tzipi Livni, are demanding that the United States get Iran to agree to subject itself to an Israeli military strike if it is deemed not to stick to its end of the very unbalanced and unfair bargain. Are they out of their Zio minds?! And this is what passes for Israeli “doves” in the Zio media. With doves like that, who needs war criminals?

(From the Times of Israel)

The Zionist Union party said Sunday that a final nuclear agreement between Tehran and world powers should contain a provision legitimizing Israeli military action against Iran if it violates the terms of the accord. 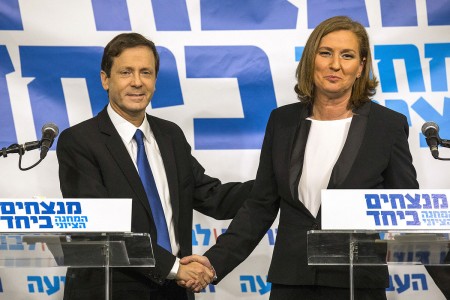 In a new policy document, the party called for the implementation of “necessary changes” to the framework deal reached between P5+1 states and Iran last week, so that Israel can “cope with a nuclear-armed Iran and its role in sponsoring regional terrorism.”

The left-wing party said it was “committed to an overarching, extensive and determined struggle” aimed at preventing Iran from building nuclear weapons and said that Tehran must be made aware that if it attempted to make a bomb, “all options, including sanctions and military action,” remain on the table.

A staunch opponent to the US-led drive to sign a deal with Iran, Prime Minister Benjamin Netanyahu also proposed amendments to the emerging deal between P5+1 states and Iran on Sunday.

Asserting that “Iran could not be trusted,” Netanyahu called for the emerging deal to lift the economic sanctions against Iran at a fixed date, provided that it complied with the terms of the agreement and halted its support of regional insurgencies and its public threats to annihilate Israel.

The prime minister’s comments came one one day after US President Barack Obama criticized Netanyahu for lobbying against the deal without offering alternatives to its current terms.

The commitments, if implemented, would substantially pare down Iranian nuclear assets for a decade and restrict others for an additional five years. Iran would also be subject to intrusive international inspections. The world powers have until June 30 to hammer out a final accord.

Jonathan Beck and AP contributed to this report.