By Adrian Salbuchi. As the world holds its breath, wondering when the US and its allies will attack Syria, Western governments and its well-oiled mainstream media seem to be ignoring a key player that has kept strangely quiet during this crisis: Israel. 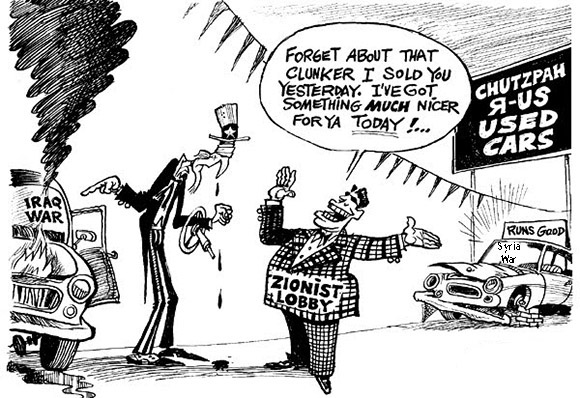 Today, US power rests heavily on its terrifying military, its industrial-financial complex, and its global media clout.  But that power is fast eroding because, in the age of the Internet, power is increasingly much more about prestige, credibility and trust, an area where the US is falling to pieces.

US interventionism has become all too blatant over the past 20 years. The Balkans War in the late 1990s, with the bombing of Belgrade, triggered initial alarms especially amongst non-ally countries because, coupled with Bush Sr.’s 1991 Gulf War, it became clear that the  American global hegemon was out to get the whole world, especially with the former Soviet Union out of the way.

But what got red lights blinking really strongly was Iraq.  Baby Bush’s false accusations of “weapons of mass destruction” as an excuse to take out an entire country just so he could “smoke out” an uncomfortable former associate, Saddam Hussein, were blatantly obscene and proved to many that the American global hegemon was officially out of control.

Back then, America still had the excuse of the horrendous 9/11 terror attacks in New York and Washington to justify its mass war-mongering.  But American credibility took a sharp fall when George W himself ended up admitting that: (a) there was no connection whatsoever between nasty Saddam and nasty Osama who allegedly did 9/11 (Alas! We’ll never know because Obama later threw Osama into the ocean…) and (b) there most definitely, assuredly and unequivocally were NO weapons of mass destruction in Iraq…  Add to that the burden of growing proof that 9/11 may have been a false flag…

So, America had to design a new system of war or, rather a new system of getting itself into war against its selected “rogue state” targets.  It’s no longer enough to go on TV and accuse such and such a country of being a “danger to world peace” or that it “does not have the kind of democracy that we want to see” as Hillary Clinton said when visiting Egypt only last year…

No.  Something new had to be invented: “The Arab Spring”, which is the code for instigating, triggering and engineering civil strife in target countries which can then be escalated, as necessary, to veritable social war.  And if the ongoing leadership still don’t get the message and insist on clinging to power, then US, UK, Israeli and other intel agencies can escalate the engineered nationwide mischief all the way up to fully–fledged civil war.  Libya, Syria, Egypt, Afghanistan, Iraq… of the Islamist Syrian opposition group Ahrar al-Sham fires against a Engineering such wars throughout the Middle East basically requires:

(a) Identifying who the “freedom fighters” would be – mostly thugs, terrorists, guerrillas, soldiers of fortune and a wide assortment of violent mercenaries;

(b) Then arming them with lethal high (though not too “high”)-tech weaponry, financing them to ensure they can do as they please inside the target country, and

(c) Unleashing them onto the cities of Egypt, Libya, Syria and elsewhere, just as they did (and still do) inside Iraq.

And if all of that doesn’t work, then just order several NATO fighter squadrons to bomb the damn place to smithereens and provide satellite Intel to local “freedom fighters” so they can execute Hollywood-like operations such as the live-TV assassination of Muammar Gaddafi and his family, accompanied by Hillary Clinton’s chuckles on CBS TV.

But the case of Syria is different.

The world will no longer have America pulling the wool over its eyes.  Growing sectors in the international community are coming to understand that those gangs of violent assassins, rapists and criminals – aka Syrian Freedom Fighters – have been armed, trained, financed and given the fullest media support by the US and its allies.

America’s dirty tricks department is raving full-blast right now trying to pin recent chemical weapons attacks on Bashar al-Assad’s government, but this is getting very low credibility ratings.  Common sense dictates that it would be suicide for President Bashar Assad to kill his own civilians – including children – in a Damascus neighborhood, when his real enemies are the Western-backed terrorists and delinquents trying to take over his country.

Why would Assad give his enemies the “perfect excuse” for an armed attack against Syria?  Common sense tells us that Assad is surely telling the truth when he accuses those very same terrorists for that “false flag” attack as a way of bringing NATO in on their side, with its jets, cluster bombs and napalm.

Every time we hear of such dreadful terror attacks we need to understand two fundamental issues: (1) who benefits from such attacks, and (2) follow the money trail…

Today, America’s credibility, trust and prestige have fallen so low that even the British Parliament finally disavowed any armed intervention by the UK, at least until such time as the UN or some truly trustworthy independent entity churns up irrefutable proof regarding who perpetrated those heinous chemical weapons atrocities in Syrian last week.

But let’s look at three factors that are missing in the ongoing analysis of the Syrian crisis:

Ever since the two Gulf wars, America has been fighting Israelis’ wars for them.  In the case of the 2003 invasion and destruction of Iraq, this was so obvious that the very same NeoCons who in 1996-7 planned war against Iraq in their “Project for a New American Century (PNAC)” think-tank – Paul Wolfowitz, Richard Perle, Dick Cheney, Condoleezza Rice, Bush, Douglas Feith, David Wormser and others – would later execute that war in 2003 as top officers in the George W. Bush regime.  The prime reason: Saddam Hussein was then the greatest threat to “democratic and favored ally” Israel.

Several of those NeoCons – Douglas Feith, David Wormser, Richard Perle and other Bushites – had already gone so far as to prepare a strategy report for Israeli prime minister Benjamin Netanyahu in 1996 called “A Clean Break: A New Strategy for Securing the Realm” which, again, targeted Iraq as Israel’s key foe at the time.

So, the Iraq War was to a great extent a proxy war that only benefitted Israel, becoming a huge headache for America, which lost thousands of its sons.

As the former prime minister of Malaysia, Mahathir Bin Mohammed, once famously pointed out: “The Jews rule the world by proxy. They get others to fight and die for them.”

The excessive and overpowering role that Zionism plays in American politics, American finance, American universities, American mainstream media including it Hollywood “entertainment industry,” and over American foreign policy, has been all but proven. This vital issue today lies at the heart of an increasingly far-reaching debate among America’s intelligentsia, which is, of course, being hushed up by the mainstream media.

One of its milestones was played out by two of its prestigious academics – Stephen Walt, former Dean of the John F Kennedy School of Government at Harvard University, and his colleague John Mearsheimer, professor of Political Science at Chicago University – who published their groundbreaking book: “The Israel Lobby and U.S. Foreign Policy” in 2007.

In it, they show in a very convincing and well-documented manner the long reach and powerful clout that the “Israel First” lobby exercises over the US media, the banks, the Congress, the State Department and the Pentagon, whereby they are able to systematically tip the scales in favor of Israel, no matter what the cost. No matter if right or wrong.

And the cost to America has been extremely detrimental to its National Interest.  Here lies one of the roots of much of the disrespect, mistrust and even hate that growing sections of global public opinion feel towards the US and its key allies.

President Barack Obama’s problem right now is that America’s military establishment is very much aware of the stakes involved in any “preventive attack” against Syria and, much more importantly, against Iran.  Intervention against either or both countries will undoubtedly lead to massive war in the Middle East.

Look at a map: Syria and Iran lie squarely inside Russia’s vital geopolitical sphere of interest, which is already under heavy Western encroachment.  Read their lips: Russia is saying, “not one step further!”

But here comes the problem: ever since Israel was kicked out of Southern Lebanon in July 2006 by the well-armed and trained (by Iran and Russia) forces of Hezbollah commanded by Nasrallah, Israel has been licking its wounds; dark furor and revenge burns in Zionism’s heart.

Since Bibi Netanyahu came back to power in 2011, Israel has gone into preventive war mode, using Iran’s inexistent nuclear program as a pretext.  For that past four or five years, Israel has been threatening Iran with military attack almost every other day, with Washington, London and Paris nervously obliging…

The American military, however, are painfully aware that there’s some truth to former Prime Minister Mahathir’s words.  They don’t want to fight yet another Israeli war this time in Iran.  So, they have been acting as a brake which is reflected in Obama’s increasing “caution” regarding Iran, going so far as to dispatching his military top brass to Israel to calm Netanyahu down, trying to make sure Israel does not launch a unilateral “preventive attack” on Iran that will drag the US into a massive conflict in the Middle East, the results of which are far from clear.

Actually a US-UK defeat in the Middle East could very well spell the beginning of the end of America as a global superpower. Russia (and China) are staring very sharply at the Middle East…  They are not blinking…

The ongoing US military strategy says that if the White House must take on Iran, it should first take out Syria.  At least that seems to be America’s promise of sorts to keep Netanyahu’s dogs of war at bay.

But the weeks have turned into months, the months into years and Zionists in Israel, the US, Britain , France and elsewhere are getting awfully impatient.

They want their D-Day now!

If the road to Tehran must go through Damascus, then, America: take out Damascus now!

For three years the US has been engineering “Arab Spring” civil war in Syria but Bashar Assad’s still there. Russia stands behind him.

A UN Security Council unanimous vote against Syria is no longer an option. Britain’s Parliament just said no to David Cameron, and French President Hollande’s support of the US lacks clout: sadly for the French it’s been many decades since France was last able to decide the outcome of any war, anywhere…  Now, many in the US Congress are grumbling…

So, Mr. “CEO” of the United States of America Barack Obama: it’s your call now!

You either strike against Syria now – today, even – to the unanimous applause of Zionists in Israel, Congress, the global banks and markets, the mainstream media and throughout the world, or you stand down and your prestige, “Mr. President,” goes down the drain.

Your bluff will have been called. And a bluffing president is no president at all.

Mr. Putin knows this only too well, which is why he maintains Russia’s powerful fleet roaming the waters of the Mediterranean off the coast of Syria…

Once again, it’s shame on you, America!

Another fine mess the Israeli Trojan Horse has gotten you into…!