Earlier this year, at the behest of the Jewish state of Israel, the organized international Jewish community, and traitorous politicians working for the Jews in the West, the United Nations held an informal plenary session on the alleged “rising tide of anti-Semitism” around the world.

Of course, all respectable mainstream politicians, journalists, and public policy makers agreed that “anti-Semitism” must not be tolerated anywhere in the world, that it should be immediately condemned, and that “anti-Semites” should be ostracized, shunned, and even criminally prosecuted for “hate crimes” and “anti-Semitic speech.” 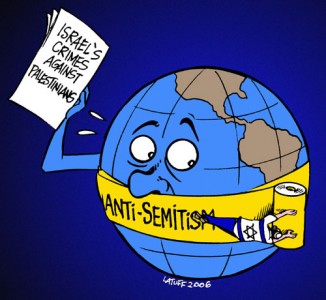 However, some political commentators and international bureaucrats went a step further. They argued that “anti-Semitism” must be confronted and legislated against at the international level, with the German and French representatives openly calling for “a new legal framework at the European Union and internationally to address the diffusion of racist and anti-Semitic speeches and material,” The Times of Israel reported.

The tireless efforts of organized international Jewry and the Jewish state of Israel to have “anti-Semitism” acknowledged globally as a “thought crime” are once again making headlines. The Algemeiner, an online Jewish news outlet, recently reported:

Attorney Alan Baker, Israel’s former ambassador to Canada and a legal adviser to the Foreign Ministry wants antisemitism to be treated as an international crime. In a new Israeli initiative, Baker is proposing that international courts be used to combat global hate crimes against Jews.

Baker has drafted an international convention calling on the “Prevention and Punishment of the Crime of Antisemitism.” The Convention, which is drafted in the manner of classical international anti-terrorism treaties and those for other crimes, will allow countries to cooperate and exchange information with others, in order to extradite those suspected of acts that meet the definition of antisemitism, Israel’s NRG reported in Wednesday.

“We need to set down clear rules on what constitutes antisemitism and to set up international codes to prevent it. We expect that the initiative will be thoroughly discussed among all entities and countries that are engaging antisemitism on a global scale,” said Baker.

Explaining the need for the Convention, Baker noted that, “everyone knows to condemn antisemitism, but they are not doing what is necessary in order to fight against it on an international legal level.” He added that, “on the other hand, international courts invite people from around the world to account for various crimes. We think that this is precisely the place to also work decisively and unambiguously against antisemitism.”

The Jerusalem Center for Public Affairs, where Mr. Baker is now a fellow, intends to release a draft of the Convention, during a series of conferences at the United Nations, to other international organizations, international capitals, and among Jewish communities and organizations around the world.

Baker said that, “if the world really wants to work against this terrible phenomenon, the time has come to line up behind the measures that are necessary to be employed against it.”

Think about the severity of these recent developments folks: the Jews are pushing to have “anti-Semitism” (i.e., stating basic facts about the subversive, criminal nature of organized Jewry and the Jewish state of Israel) internationally recognized as a crime. If the Jews get their way, “anti-Semites” will literally be arrested and extradited to stand trial at an “international court of justice.” If this isn’t the epitome of total Jewish tyranny implemented on an international scale, I don’t know what is.

And consider what the Jews did during the Bolshevik revolution almost as soon as they took over. They criminalized “anti-Semitism” and made it an offensepunishable by death.

“As an expression of its radically anti-nationalist character, the fledgling Soviet government issued a decree a few months after taking power that made anti-Semitism a crime in Russia,” Mark Weber explains in his excellent treatise detailing the Jewish role in the Bolshevik revolution and subsequent Communist regime. “The new Communist regime thus became the first in the world to severely punish all expressions of anti-Jewish sentiment.”

If you dared to criticize or expose Jewish criminality and treachery in the Soviet Union, particularly during and immediately after the Jewish engineered Bolshevik revolution, you’d be imprisoned, tortured, and/or murdered, oftentimes in the most depraved fashion. That’s exactly what the Jews are aiming to implement in the 21st century, only on a global scale.