The Zionist Supremacists have once again arrogantly taken the law into their own hands and disregarded all international conventions by bombing a Syrian air force base near Damascus—without a peep of protest from their controlled puppets in Washington or any other Western capital.

The news of Israel’s renewed military intervention in the conflict in Syria comes just weeks after the Zionists failed in their efforts to incite America and other nations into attacking Syria on their behalf.

The first indication that there had been an attack came earlier on Thursday when explosions occurred at two Syrian airbases.

Only later an Obama administration official confirm to CNN that Israeli warplanes had carried out the bombing and claimed that the target was “missiles and related equipment” which the “Israeli government assessed might be transferred to the Lebanese terror group Hezbollah,” the CNN report said. 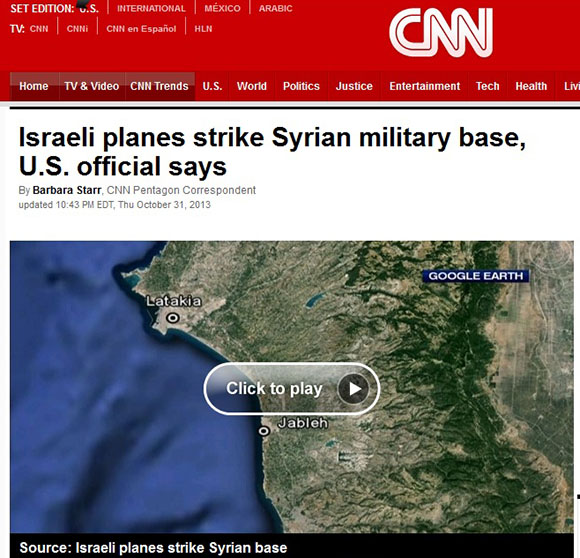 It is of importance to note that the “Obama official” refused to condemn Israel for this over transgression, and given that the Zionists only “suspected” that weapons there were destined for Hezbollah (as if Syria could spare weapons in the midst of a major internal war).

Consider what the US reaction would have been if Syrian aircraft had bombed Tel Aviv airport “because the Syrian government suspected that arms stored there were on their way to the Syrian rebels.”

The US government would be at the forefront of condemning such an act of “Syrian aggressions” and would now most likely have launched military strikes in retaliation.

However, as the bland report in CCN shows, Israel has a free hand to commit any sort of aggression it pleases—because the Jewish Supremacist lobby which controls Washington will always ensure that the Zionist state is protected.

Once again, the lesson is clear: The Jewish Supremacist death grip over American politics must be broken before there can ever be world peace.