Iran has evidence of illegal oil trade between Turkey and Islamic State (IS, formerly ISIS/ISIL) – and is ready to deliver the information to Ankara and the public, a state official said. Tehran has gathered photos and video footage of oil trucks entering Turkey.

“If the government of Turkey is not informed of Daesh [derogatory term for IS] oil trade in the country, we are ready to put the information at its disposal,” Iran’s official Islamic Republic News Agency (IRNA) quoted Expediency Council Secretary Mohsen Rezaie as saying on Friday.

Migration fears are a short-term issue, says Blair: Former PM dismisses public concern about refugee crisis and said Britain would be ‘diminished’ by leaving the EU

By James Slack Political Editor For The Daily Mail 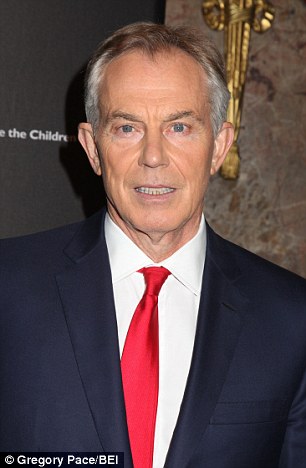 Tony Blair has dismissed mass immigration as a ‘short-term issue’

Tony Blair dismissed public concern about mass immigration as a ‘short-term issue’ yesterday – and insisted Britain would ‘diminish ourselves’ by leaving the EU.

The ex-Prime Minister claimed the referendum debate in the UK was ‘a diversion of energy’ from more pressing political problems.

He also said that David Cameron’s instinct was to ‘stay in’.

Mr Blair, who once wanted Britain to join the euro, declared: ‘There’s a risk we end up having a debate in Britain over the EU that is essentially about immigration and short-term issues to do with the big refugee crisis or the short-term problems of the single currency.

‘We need also to give the country a sense of what is Britain’s place in the world and for our key ally to be expressing an opinion … I think is important.

‘People in the country need to know we are going to diminish ourselves if we do this.’

Immigration is the number one public concern in Britain – which Mr Blair’s opponents laying the blame firmly at his own door.

Brainwashing of our children: Britain’s schools are force-feeding pupils politically correct dogma about sexuality, climate change and British history. The result will be a nation LESS tolerant than before

By James Delingpole For The Daily Mail

‘When I get married — whether it’s to a man or a woman…’ my 11-year-old niece told her grandpa the other day. But I don’t think she thinks she’s a budding lesbian (would she even know at that age?).

It’s just the way she has been taught to think at her impeccably right-on school in the People’s Republic of Brighton.

It reminded me queasily of another niece’s experiences — this time at an overwhelmingly white, Christian state school in Worcester. Her dad had wanted to know why when she said ‘Mohammed’, she automatically added the phrase ‘Peace Be Upon Him’.

‘Oh, it’s what we’re taught we have to say in RE,’ my niece replied.

Did the schools ever consult us on whether we wanted our children’s heads to be filled with such politically correct bilge?

(JTA) — Lori Berenson, the Jewish New Yorker whose imprisonment in Peru for aiding leftist rebels became a cause celebre, is returning to the United States after 20 years.

Police escorted Berenson, 46, through the Lima airport on her way back to the U.S. on Wednesday night. She was carrying her 6-year-old son, Salvador, from her marriage to her attorney, Anibal Apari. The couple has divorced.

In 1995, Berenson was convicted of treason by a panel of military judges for aiding leftist rebels in a plot to overthrow the Peruvian Congress. She spent 15 years in prison and the rest of her 20-year term on parole in Lima, the capital city.

Berenson has denied belonging to the Tupac Amaru Revolutionary Movement or engaging in violent acts. In 2010, she apologized to Peruvians in a letter for any hurt she may have caused as a condition of her parole.
Click here for the full story

WASHINGTON (JTA) — Israeli Prime Minister Benjamin Netanyahu said the core of the Israeli-Palestinian conflict is the Palestinian refusal to recognize Israel as a Jewish state and rejected U.S. warnings that Israel was devolving toward a single state.

The “root cause of the problem,” Netanyahu said in a video address Sunday to the annual Saban Forum, is that “the Palestinians have not yet been willing to cross that conceptual bridge, the emotional bridge of giving up the dream of not a state next to Israel, but of a state instead of Israel.”

Netanyahu’s appearance at the annual convention of U.S. and Israeli leaders, convened in Washington, D.C., by the Brookings Institution and sponsored by Israeli-American entertainment mogul Haim Saban, was a last-minute addition. It came after a scorching speech to the forum the previous evening by U.S. Secretary of State John Kerry warning that Israel’s settlement policies were leading toward a one-state outcome.

Netanyahu denied that Israel was headed toward incorporating the West Bank Palestinian population.
Click here for the full story

Some 200 Africans from Sudan and Eritrea have managed to cross the border from Sinai into Israel, despite the completion early last year of the new border fence, Ynet has learned.
Groups of Africans climbed over the fence using 6-10 meters high ladders, and were immediately arrested by IDF troops.
Click here for the full story

Next Post French comic Dieudonne sentenced to jail for anti-Semitism