By Dr. David Duke. A Jewish-controlled website from Jerusalem meant to channel Christians to support Zionism and Judaism, Israel Today, has a telling headline: “The Presbyterians and Anti-Christ.” 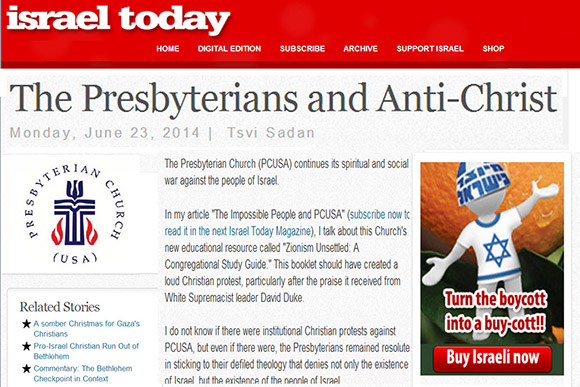 It essentially tells Christians that those who oppose the murderous, mass ethnic cleansing and oppression of the Palestinian people are the “Anti-Christ.”

It condemns the Presbyterian Church—and me—because we support disinvestment in Israel and oppose the Zionist State as well as the Jewish supremacism and racism around the world that seized control of much of media, banking and politics that supports enormous Zionist crimes in Palestine.

How does one even begin to respond to it? I guess one can begin by a prominent lie of the article and Jewish dominated media. I am described as “White supremacist,” when the truth is that I clearly condemn any form of racial oppression, exploitation or supremacism by any people over any other people.

I believe in the right of every people on Earth to be free an independent, and that any people harming another people is morally wrong and repugnant.

So, not only am I not a White supremacist, I actually condemn any form of supremacism. Thank God that we now have the Internet so people can actually see for themselves what I actually say rather than the Jewish lies about me. Of course, that does not stop them from calling me a racial supremacist when I forcefully condemn it!

The problem with me  is that I also dare to condemn the world’s most virulent and influential racist supremacism:  the ultra-racist, Jewish supremacist, murderous, ethnic cleansing, terrorist state of Israel.

I oppose the Jewish racism that has taken over the media and politics of many nations and supported insane Zio created wars such as in Iraq and Afghanistan, Syria and around the world.

To me, nothing is more pitiful and truly insane than Christians who are so brainwashed as to promote the most anti-Christian and anti-Christ power on earth: Judaism, the leading secular organizations of Jewish tribalism and Zionism, and the modern State of Israel.

It is typified by the lies of a Zionist organization headquartered in Israel designed to get Christians to support the most hateful enemy of Jesus Christ, Christians and Christian values on Earth.

The interesting thing is that Christian Zionism is completely opposite of Christian attitudes toward organized Jewry from the time of Christ. The horrific Jewish persecutions of Christians are plainly recorded in the gospels, and all the way until about the last 30 or 40 years. Christians universally understood that the Jewish establishment was the biggest enemy of Jesus Christ and Christians on Earth.

It is no accident that the change in the church coincided almost exactly with the Jewish takeover of media and politics in the United States of America and across the Western World.

Let me deal with some of the big lies of Christian Zionism.

The fact is that Israel is Jewish Religious State.

How does Judaism view Jesus Christ?

No Satanist can exceed the hatred of the Jewish religion toward Jesus.

The Jewish Talmud literally proclaims that Jewish priests have with black magic conjured up Jesus Christ from the dead and they are boiling him for eternity in human excrement.

It proclaims that Mary was a prostitute, Jesus a bastard, and that Jesus was a pervert who had sex with donkeys.

Perhaps you will not believe me. But it is all true. 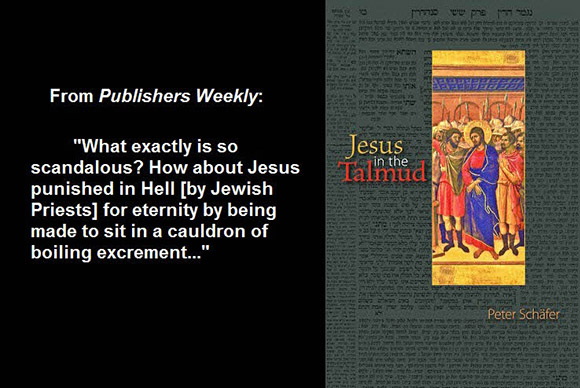 Most Christians rail about the sickness of Hollywood, the promotion by the media of the opposite of every Christian value.

The Jewish state of Israel that Christians are supposed to support has laws that provide 5 years imprisonment for Christian evangelism.

The Jewish state of Israel has killed tens of thousands of fellow Christians in Palestine and Lebanon!

I have a number of videos on the subject:

And I have other articles about the pernicious of lie of Christian Zionism.

Actually supporting Zionism and the Jewish power structure in America and other nations around the world is perhaps the most anti-Christian thing one could do, for that power structure harms and destroys the lives, families, health, morality of hundreds of millions of people, mostly Christians.

The lies are never ceasing from the Zionist controlled media.

It is sad that so many Christian preachers have sold their soul to the anti-Christian Jews, and they dare not say a word about them because of what the New Testament talks about again and again.

“Fear of the Jews” is a phrase spoken about repeatedly in the New Testament. And any prominent Christian preacher knows that his ministry would suffer and he would be demonized for saying the truth publicly.

A perfect example is the most famous Christian evangelist in the world Billy Graham, who in a private conversation talked about the “synagogue of Satan” and how if the Jewish control of American politics is not broken that “America is going down the drain.” He also talked about the vicious anti-Christian actions of Israel.” And then Graham and Nixon discussed how they knew and believed these things but they could not dare say them in public.

Yet for fear of the Jews no one spoke openly of him.

(His parents said these things because they feared the Jews, for the Jews …

[ Jesus Is Buried ] After these things Joseph of Arimathea, who was a disciple ofJesus, but secretly for fear of the Jews, asked Pilate that he might take away the body of Jesus, and Pilate gave him permission. So he came and took away his body.

[ Jesus Appears to the Disciples ] On the evening of that day, the first day of the week, the doors being locked where the disciples were for fear of the Jews, Jesus came and stood among them and said to them, “Peace be with you.”

I have many long articles on the subject. But I will expose here the ultimate lie, that God currently has a “covenant” with the Jews.

The truth is that the Scriptures could not be more plain on this subject. The clarity is startling.

Not according to the covenant that I made with their fathers, in the day when I took them by the hand out of the land of Egypt; because they continued not in my covenant, and I regarded them not, saith the Lord.  (Hebrews 8:6–7, 9–10)

The New Testament makes clear, that the children of God are not the Jews, but those who believe in Jesus Christ, the “children of the promise not of the flesh.”

This is the heart of the New Testament, the heart of Christianity itself, the idea that with the coming of Jesus Christ, the chosen people are now all those who believe in him. It even goes on to clearly say that the people who “were not my people I will call my people

As indeed he says in Hosea,

Those who were not my people I will call ‘my people,’

. . And in the very place where it was said to them, ‘You are not my people,’

Imagine if any minister uttered these words:

“. . .for you suffered like things of your own countrymen as they did from the Jews, who killed both the Lord Jesus and the prophets, and drove us out and displease God, and oppose all men. . . But God’s wrath has come upon them at last.”

Yet, these words are right out of New Testament in 1 Thessalonians 2:14-16)

Think about the fact that these words apply perfectly to the Palestinian Christian families who have been murdered, terrorized and driven out of their lands and homes by anti-Christ, anti-Christian Zionists.

For Christians to support them in this crime is an unimaginable evil, perhaps the most anti-Christ, anti-Christian thing that a person could do.

Use the mind that God gave you!

As the New Testament also says,

This testimony is true. Therefore rebuke them sharply, that they may be sound in the faith, instead of giving heed to Jewish fables or to commands of men who reject the truth. (Titus 1:13–14)

I urge all Christians to wake up and reject these Jewish fables!

Thank God the Presbyterians are beginning to do so!