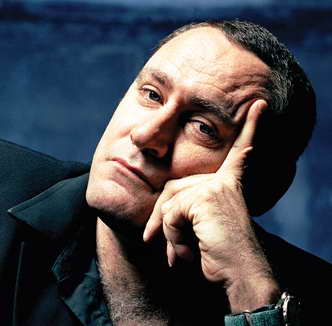 Commentary by Dr.David Duke –The outspoken former Israeli Gilad Atzmon is perhaps the bravest and clearest thinking person of Jewish descent in the world. In a sense, music is truth in that music composes freely from the soul. A man evolved in the freedom and truth of music, may have a head start in philosophical honesty as well.

Mr. Atzmon has the perception to both see the ‘gorilla in the room’ and the courage to expose it.

They say they oppose some of the policies of Israel, but they ardently deny the Jewish networking and Jewish ethnic tribalism that makes Zionism possible.

The Council of Presidents of Major Jewish Organizations illustrates this principle. It is an organization of 50 extremely powerful and well-financed Jewish organizations, most with global reach. Some are hard core racist, Jewish supremacist fanatics. A few are what you would think are more liberal minded. But, every group in the Council are united in one thing: the specific tribal interests of the Jewish people. Every thing they is based on a clear and supreme dedication to what is best for Jews, period. It is clear in their mission statements, which are there for all to see.

Every one of the 50 organizations calls itself  Zionist and supports the Zionist State of Israel. That, of course, is the same Zionist State that ethnically cleansed the Palestinian people. Every one of them continues to support Israel even though it continues to ethnically cleanse, attack, bomb and torture the Palestinian people.

The AJC, or American Jewish Committee  is a perfect example of that elemental ethnic supremacism. It proclaims itself as the most powerful “Jewish advocacy” organization on Earth. That’s “Jewish advocacy.”

So the inescapable reality is that the organized Jewish community is synonymous with the promotion of Zionism.

They love to display the leaders of the Western World such as Obama and Romney and Cameron and Hollande and Merkel coming to them begging for their approval. They boast of the political and financial and media elite of the world rolling out the red carpet for these Zionist, tribalist fanatics.

The so-called anti-Zionist Jewish organizations are hardly a tiny blip on the radar screen, a few toothpicks floating in the flotsam next to the Queen Mary.

And all of these tell us adamantly tell us that it is not Jewishness, not Jewish Tribalism that is the problem, but simply Zionism. They call it “anti-Semtic” to point out that organized Jewish power enables the Zionist crimes.

Actually, the fact that some ostensibly “anti-Zionist” organizations even exist, no matter how minor their Jewish support, serves a great purpose in the effort of the Zionists to deflect the Zionist problem from the Jewish establishment. It is not Jews they scream, it is just the Zionists!” But Zionist Jews dominate the Jewish community and through this tribalism they dominate all of us.

They say that Zionism has nothing to do with Jewishness. Gilad Atzman reminds us, though, that Jewish symbols are all over the Zio weapons of mass destruction: the attack planes, tanks and bombs of the admittedly Jewish state!

They fail to mention that practically every synagogue in the world overtly upports the Jewish State, and they support Jewish supremacism in the Diaspora.

Occasionally we hear about a few Jewish synagogue that actually work against the Zionist State. In reality, once again, that synagogue is a microscopic toothpicks floating next to the Queen Mary of organized Jews and Judaism. And not one of them dares to admit the supremacist, misanthropic teachings of Torah and Talmudic Judaism. No synagogues on earth  oppose the Jewish networking and supremacism that empowers the core of Zionism.

They all teach that Jews are eternal victims, and that Jews must network and support each other, that Jews must support Jewish interests and their fellow Jews in every endeavor, and they know that such tactics of Jewish unity will lead to domination of any divided entity over time. So the foster the politics and culture of division.

So if anyone, Jew or Gentile, is truly anti-Zionist, he must oppose Jewish Supremacism, Jewish tribalism, as well as the Jewish supremacy over the politics, media and finance of America and the Western World.

Anyone, Jew or Gentile, who does not oppose the Jewish tribalist domination, in effect supports the evils and crimes of the Zionist State. The crimes of Jewish tribalism go far beyond the evils of Israel. They fuel the Ziowars that have cast the world into terrorism, torture and hate. The Jewish supremacist moguls of media support every kind of violence, degeneracy, drug culture, pornographic degeneration and the dissolution of the highest human values. They have through their tribalist financial combines stolen trillions from the American people, the European peoples and the whole world. They have, through their media, covered up it all up.

And anyone who tries to cover up and deny Jewish tribalist supremacism has to be seen clearly as an agent of Zionism and the ZioGlobalist crimes against humanity.

Jewish extremism and supremacism existed long before Zionism, and Zionism itself cannot triumph without the Jewish matrix of power in media, finance and politics.