Commentary by Dr. Patrick Slattery — In 2009, Rabbi Yitzhak Shapira and Rabbi Yosef Elitzur published a book called Torat Ha’Melech (the King’s Torah) sparked a national uproar. The Israeli paper Maariv describes the book’s contents as “230 pages on the laws concerning the killing of non-Jews, a kind of guidebook for anyone who ponders the question of if and when it is permissible to take the life of a non-Jew.” The book reaches into the Torah, or Old Testament, and finds ample evidence that the killing of Gentiles, even small children, is completely justified by Jewish religious law. The authors state “If we kill a gentile who has violated one of the seven commandments [of Noah] . . . there is nothing wrong with the murder.” These “Noahide commandments” include a prohibition of idolatry and a prohibition of blasphemy — as judged by Jews, of course. The book has been very influential in the Israeli military and among violent Jewish settlers in the West Bank. 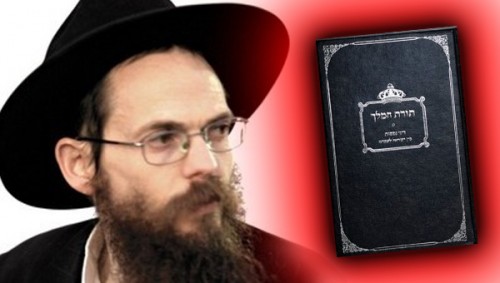 The book is itself the subject of a new book by Jewish American journalist Max Blumenthal. Blumenthal’s writings and videos are extremely valuable in teh study of Jewish extremism, as he is not shy about using his Jewish name and looks to gain access to Jewish extremists in order to document the ugliest side of Zionism, at least as far as it pertains to Israel. He is less forthcoming about Jewish domination of the United States and other countries, and also has attacked former Israeli Gilad Atzmon for pointing out the role of Judaism and the Jewish identity in creating the monster of Zionism.

Even so, his book underscores some of the points that he attacks Gilad Atzmon for making. For instance, he describes Rabbi Ya’akov Yosef’s endorsement of the Torat Ha’Melech as follows:

He then reminded his audience of the Passover tale. “We asked the Jewish people, ‘You don’t want to read from the Hagadah at the Passover table [citing the slaughter of non-Jews]? Does anyone want to change the Bible or the statements of the Torah?” Shapira and Elitzur’s only crime, Yosef claimed, was remaining faithful to the oral and written statements contained in the Torah.

Of course, Passover actually is a holiday celebrating genocide. Rabbi Ya’akov Yosef, by the way, was a former member of the Israeli parliament.  Blumenthal goes on to recount a conversation he had with a young American Jewish colonizer of the West Bank:

Yossi and I chatted with a 22-year-old settler who spoke to us in an American accent. We demanded to know if he was willing to defend the provisions in Torat Ha’Melech justifying the murder of innocent children. Without hesitation or any initial shame, the young man, who refused to give his name, told us, “There is such a concept in Jewish law as an enemy population, and under very, very specific circumstances, according to various rabbinic opinions, it would be seemingly permissible to kill, uh, uh….” For a moment, he trailed off, and his eyes darted around the room. But the settler managed to collect himself and complete his statement. “To kill children,” he muttered uncomfortably.

The book also verifies points that Dr. Duke has frequently made about extremist of the Chabad movement as well as the former Chief Sephardic Rabbi of Israeli, Ovadia Yosef:

Yaakov Yosef was escorted into the gathering by Baruch Marzel, a notoriously violent leader of the Jewish terrorist group, Kach. Up at the podium, Yosef hailed Marzel as a “gever,” or a great man of honor. Yosef was the son of Ovadiah Yosef, the spiritual guide of the Shas Party and former Chief Sephardic Rabbi of Israel. Despite Ovadiah Yosef’s penchant for outrageous ravings (“Goyim were born only to serve. Without that, they have no place in the world,” he proclaimed in a weekly sermon), he opposed the publication of Torat Ha’Melech, calling it “racist” and dangerous to Israel’s international image. But since joining the extremist, cultic Jewish sect of Chabad, Yaakov had taken on a decidely more radical posture than his father.

By the way, here is a picture of President Bush signing a proclamation marking Education and Sharing Day, an annual commemoration of the work done by the Chabad movement. Yet more evidence that we are a nation occupied by a hostile elite. 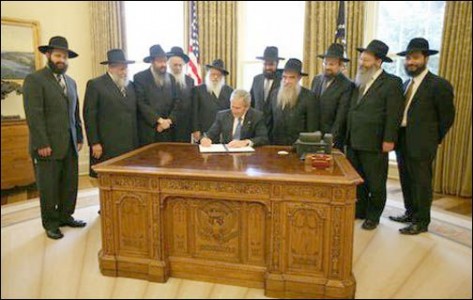 A lengthy exert from the book can be found here.

Next Post The Talmudic Roots of Jewish Supremacism by Dr. David Duke