Now available on the Rense Radio Network archive: Hear Dr. David Duke give the most powerful proof possible that the whole Ferguson media hoopla is nothing but a most extreme incitement of racist hatred against European Americans. 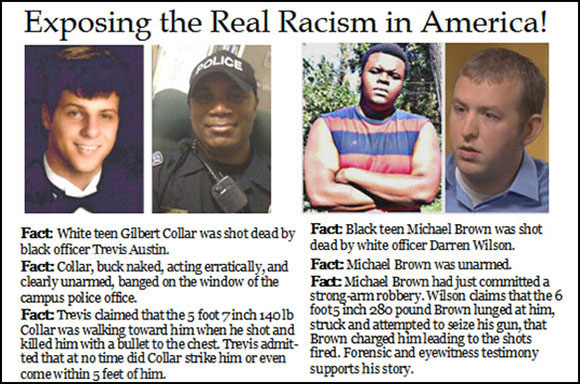 Dr. Duke contrasts the Michael Brown case with the Gilbert Collar case where a white teen was shot to death by a black police officer, but there was no outrage in the media and no headlines: “Black Policemen Kills Unarmed White Teen.”

Black crime rates both against whites and their own people have skyrocketed in the last few decades because of the degradation and degeneration of the Jewish controlled media that has soaked young people in violence, degeneracy, drug abuse, alcohol abuse, sexual abuse, and other forms of behavior that have led to millions of lives lost or ruined in the United States and around the world.

Don Advo joins the discussion and Dr. Duke shares the davidduke.com article on the Jewish financing of the ‘Femen” radical feminist movement, and how the Jewish media has supported every attack on the foundations of the Western world and Western morality.

They both show that the mass media propaganda portraying the Ferguson incident as “White Racism” completely dovetails with their assault on every foundational pillar of a civilized society that truly respects human rights and values.

Next Post CIA Torture: A Product of the Jewish Supremacist Takeover of America