Now on archive: hear Dr. Duke’s radio show about the realities of Judaism and Jewish tribal racism and extremism.
He shows the reality from Jewish authorities that many Jews are non-religious yet support Jewish supremacism and extremism, and even many religious Jews are openly atheist and yet join and often even lead synagogues. So strange but so true. 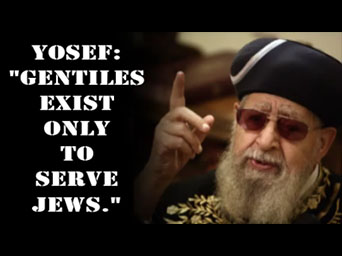 (DavidDuke.com) documents Jewish publications stating that very clearly but hidden from the consciousness of most Gentiles. He talks about the mechanism of racism and discrimination in favor of fellow Jews and against Gentiles that has led to their complete domination of Hollywood and media, International banking like the Federal Reserve, and political policies both on the domestic issues level, such as immigration and social values, and foreign policy, such as support for Zionist war and objectives.

Dr. Duke shows with easily confirmed sources that the this Jewish supremacy is not because of markedly higher intelligence or better work ethics but because of racist discrimination. He cites Ron Unz in his The Myth of American Meritocracy that proves this fact.

Then he and Dr. Slattery go into the Jewish ethnic hatred toward Gentiles and finally Dr. Duke once again urges listeners to watch the Jewish studio, written and produced anti-Gentile film, Project X which promotes behavior that are destructive to the youth of the world.

Previous Post If Judaism is “Just a Religion,” Why Does an Atheist want to be the “First Jewish Prime Minister of Britain” ?