(JTA) — Former Spanish Prime Minister Jose Maria Aznar said that in view of threats from Iran and Sunni jihadists, “Israel happens to be a centerpiece of Western civilization.”

Aznar, a center-right politician for the People’s Party who presided as prime minister for eight years until 2004, made the assertion in a foreword he wrote for a newly released book by the Jerusalem-based researcher Manfred Gerstenfeld on the delegitimization of Israel and the Jews.

Israel’s significance to Western culture “is why it is under constant attack, and why we should do everything in our power to allow Israel to remain strong, free, and prosperous,” Aznar wrote in “The War of a Million Cuts.” The book was launched Monday during a panel discussion at the Jerusalem Center for Public Affairs, which Gerstenfeld formerly served as chairman. 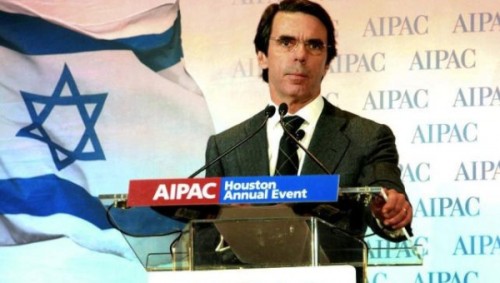 Earlier this week, Aznar told the Maariv daily that while the Boycott, Divestment and Sanctions movement against Israel declares “its aim to put pressure on the Israeli government,” in reality “BDS does not only want to change the government’s policy, it wants to empty the country of Jews.”

But speaking at the book launching at a panel with The Jerusalem Post’s editor-in-chief, Steve Linde, and columnists Isi Leibler and Amnon Lord, Gerstenfeld said that pro-Israel individuals working to counter BDS are “focusing on an important yet nonetheless secondary problem” instead of delegitimization in general and Holocaust inversion as its main single item.

Gerstenfeld, the author of several books on anti-Semitism in Europe and around the world, argued for the formation of an Israeli government entity to counter the delegitimization. He cited the publication in 2011 of a study by the University of Bielefeld, Germany, in which over 40 percent of 7,000 respondents from seven European countries said they believed that Israel was carrying out a “war of extermination” against the Palestinians.

Previous Post Ban the Confederate Flag? If so you will have to ban the far more racist Old Testament which defends Slavery and even Genoide!