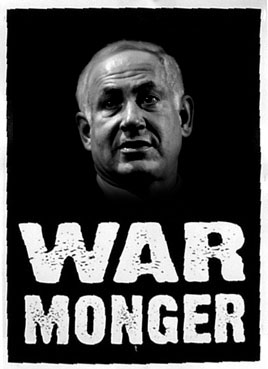 The fanatic Zionist Supremacists who run Israel have seized upon the alleged “chemical weapons attack” in Syria as an excuse to ramp up tensions across the entire Middle East and potentially provoke their long-sought war with Iran.

“Now the whole world is watching,” Netanyahu continued. “Iran is watching and it wants to see what will be the reaction to the use of chemical weapons.”

He went on to compare the Syria use of chemical weapons to Iran’s alleged pursuit of nuclear weapons: “What is happening in Syria, simply demonstrates what will happen if Iran gets even deadlier weapons.”

Earlier, a report in NewsmaxWorld quoted Israeli President Shimon Peres as calling for an international effort to “take out” chemical weapons in Syria.

“The time has come to make an international attempt to take out all the chemical weapons in Syria,” Peres said, without elaborating if he envisioned this being achieved through military strikes or otherwise.

The Zionist claims come against the backdrop of an alleged chemical weapons attack in Syria last week. The Syrian government has denied responsibility for the attack, and over the weekend put measures in place for United Nations inspectors to carry out an immediate probe into the attack, which supposedly took place near the capital city.

Syrian Foreign Minister Walid al-Moualem was quoted as saying that Syria was ready to “cooperate with a team of investigators to uncover false allegations by terrorist groups that Syrian troops used chemical weapons in (Damascus).”

While the truth behind the attack is still not clear (and British puppet foreign minister William Hague has already said the “evidence may be gone”), the openness of the Syrian government contrasts strongly with the Zionist refusal to allow UN inspectors to review the Jewish nation’s nuclear facilities and their massive chemical, biological and nuclear weapon stockpiles.

True to form, the Jewish Supremacist-controlled puppet regime in Washington D.C. has already responded to their master’s demands, and American military units have been positioned close to Syria for the proposed “intervention.”

Given the outrageous Zionist lobby’s lies about “weapons of mass destruction” in Iraq, and the resultant invasion and war in that country, no-one should be too surprised if the real axis of evil—Tel Aviv, London and Washington DC—produces yet another series of lies about Syria in order to drag the goyim into a new war with Syria and ultimately with Iran.

It is after all, a Zionist Supremacist dream: using the despised goyim to attack and kill each other to the benefit of Israel.