The true evil of the Jewish Supremacist mindset has been dramatically revealed with the demand by Israeli professor Mordechai Kedar that Israeli forces carry out sex attacks on the relatives of Palestinians in order to halt Palestinian demands to return to their country. 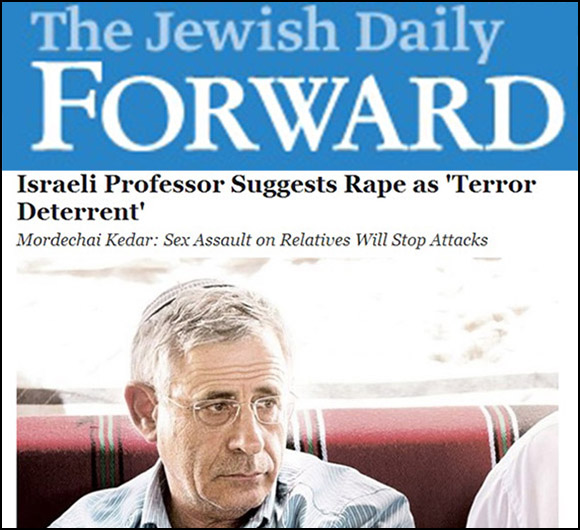 Professor Kedar, from Bar- Ilan University’s Department of Arabic advocated rape of innocent women on an Israeli nationally broadcast radio show, according to a report in the Jewish Daily Forward. It has been totally covered up in the Jewish owned Western media read by Gentiles.

“The only thing that can deter terrorists, like those who kidnapped the children and killed them, is the knowledge that their sister or their mother will be raped,” Kedar said.

“It sounds very bad, but that’s the Middle East,” he added.

The program “Hakol Diburim” (“It’s All Talk”) was broadcast on July 1, immediately after the discovery of the bodies of the three young Jews abducted and murdered in the Occupied West Bank, which has been used as the excuse by the Israleis to attack all of Gaza once again.

“You have to understand the culture in which we live,” said Kedar. “The only thing that deters [Hamas leaders] is a threat to the connection between their heads and their shoulders.”

When presenter Yossi Hadar asked if that “could filter down” the organization’s ranks, Kedar replied: “No, because lower down the considerations are entirely different. Terrorists like those who kidnapped the children and killed them — the only thing that deters them is if they know that their sister or their mother will be raped in the event that they are caught. What can you do, that’s the culture in which we live.”

When Hadar said, “We can’t take such steps, of course,” Kedar continued: “I’m not talking about what we should or shouldn’t do. I’m talking about the facts. The only thing that deters a suicide bomber is the knowledge that if he pulls the trigger or blows himself up, his sister will be raped. That’s all. That’s the only thing that will bring him back home, in order to preserve his sister’s honor.”

Kedar is also a research fellow at the Begin-Sadat Center for Strategic Studies at Bar-Ilan, and in the past also served as chairman of the Israel Academia Monitor organization, which is involved in “exposing extremist Israeli academics who exploit academic freedom in order to take steps to deny Israel’s right to exist as a Jewish state.”

Imagine for a second if any body in the world called for the mass rape of Jews, or any population group, for that matter.

There would be an international outcry, and demands for prosecution.

But because it is a Jewish Supremacists who made the comment, don’t even think that you will read about this in their Jewish-dominated mass media. There will be no outcry, no headlines, no uproar, no demands for resignation—because there is one standard for Jewish Supremacist, and another for the hated Goyim.