Duke & Collett – The goy President knows!– In brilliant move, Trump strikes back at Jewish power elite out to destroy him! 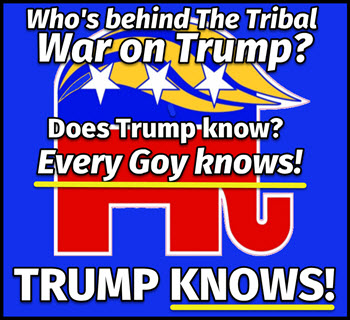 By simply recognizing Jerusalem as the capital of the Jewish state, President Trump has struck a mighty blow against the criminal Jewish supremacist State of Israel and exposed the ruthless, vicious Jewish power revving up to destroy Trump and his presidency. Simply stating that the United States of America is planning to move its embassy to Jerusalem has done more to undermine Israel than any other act by any other President of the United States since the founding of Jewish supremacist Israeli racist state.

Moving the American Embassy has no real impact on the Zio reality in Israel. Israel has already made Jerusalem its capital. But making this essentially meaningless gesture has actually incredibly damaged the state of Israel and its plans for hegemony over the entire Middle East and exposed their power as the move will be seen by all as an attempt by Trump to placate Jewish power, but in the end it may be a brilliant move to expose Jewish power.