By Dr. Patrick Slattery — Back in January Dr. Duke caused a firestorm of debate in the hiphop world when he called out Nikki Minaj for the degenerate content of her songs and videos. It turned out that vast numbers of black hiphop aficionados agreed with Dr. Duke. The Zio media, however, tried to turn Minaj into the victim by manufacturing the lie that Dr. Duke was “attacking” her for having “spoken out” about “police violence” against blacks. Here is a quote from one such article:

In a recent Rolling Stone interview, Minaj said that hip-hop stars didn’t speak out about certain social issues because they would be “torn apart” for doing so. She cited the time when Kanye West spoke out against President George W. Bush.

“I feel like when Public Enemy were doing ‘Fight the Power,’ we as a culture had more power—now it feels hopeless,” Minaj said. “People say, ‘Why aren’t black celebrities speaking out more?’ But look what happened to Kanye when he spoke out. People told him to apologize to Bush! 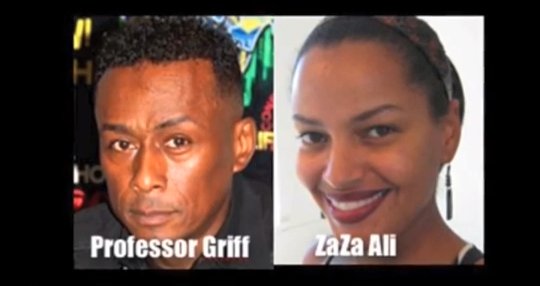 The following is a very long interview, but for those who are curious about the discussions that go on within the black community about the impact of Jewish domination of the media and music industry, it is well worth a listen.

Professor Griff and Zaza Ali join U.G.R. radio to discuss recent comments made by KKK’s David Duke in reference to hip hop, politics, and Jewish control over the media. It is very interesting to hear the discussion turn to the Jews, and the efforts of Zaza to suggest that Jews were who came from Caucasus just as Europeans did so the struggle between Europeans and Jews is just a struggle between the same people. This by the way was part of the purpose of the Jewish promotion of the Khazar Theory (among Europeans). Be sure to read Dr. Duke’s well-researched article: “Rethinking the Khazar Theory.”

There is a great deal of anti-Europeanism in the discussion. Too many people have been fooled by the Jewish-media demonization of the European peoples which is all part of the millenia-old ethnic war between Jews and Europeans which can be traced back even before their battles with the Greeks and Romans. In fact, the very name for non-Jews they use is Gentiles, which comes from Roman Gens.