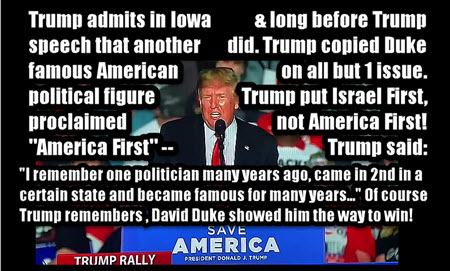 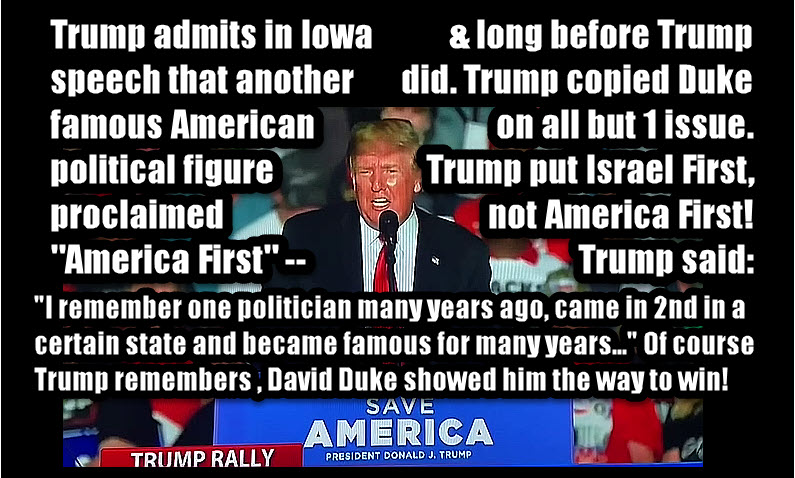 Todays show with Dr Slattery is a gangbuster! Trump in his Iowa speech talks about his great American movement the greatest ever and immediately thinks about the man whose original America First Movement and campaigns showed Trump the way to victory.  Who was it? It is our own Dr. David Duke. His exact quote was: “I remember one politician many years ago, came in 2nd in a certain state and became famous for many years…” Of course Trump remembers , David Duke showed him the way to win!

He knows, that on CNN’s Larry King Show he discussed David Duke getting 55 percent of the White vote. Trump said David Duke is going to get a lot of votes if he runs for President! He knew then that Duke’s platform was a a winning platform. Trump great failing is not to take on the Jewish power structure. He could have educated the world on the greatest threat to White people and all people in the world: Jewish Globalism. Trump has to know his destroyers who impeached him and savaged him and had a Jew D’ tat takeover of the government were completely led by the Jewish media and Jewish members of Congress such as Schiff, Nadler, Engel as well as Schumer in the Senate and every part of impeachment was Jews. But he keeps giving them lip service which is exactly the wrong thing to do. We cannot defeat these destroyers unless we educate the people who the real supremacist and ultimate racists are : the Jewish supremacists who are leading America and the world to disaster! here’s some links”

Next Post Dr Duke and Dr Slattery – Jews make up lie that Columbus was a Jew to promote themselves. Now Jews claim he not Jewish but a White supremacist!