Today Dr. Duke had Reverend Mark Dankof as his guest for the hour. They discussed the Jewish control of the bulk of the American Press. As an example, Dr. Duke mentioned the control of the New York Times by the Ochs-Sulzberger family via their ownership of 83% of the newpaper’s Class B shares. The Meyer-Graham family also perpetuated their control over the Washington Post by implementing a two-class shareholding structure so they could raise capital without diluting voting control. 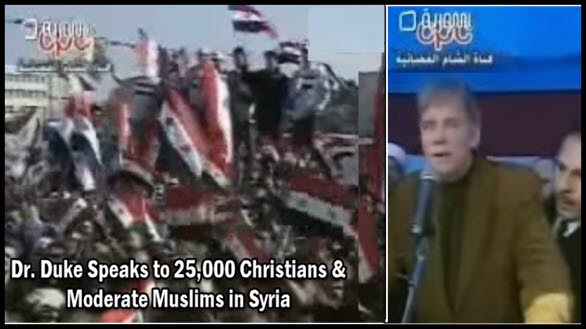 Then they talked about the Jewish Zionist role in the so-called Syrian Civil War. Jewish-dominated elements of the American government, from the Congress to the State Department, have been actively trying to undermine the moderate secular government of Syrian President Assad in order to further the Israeli agenda of breaking its strongest neighbors up into Balkanized, quarreling entities incapable of making common cause against their common enemy. Dr. Duke also play an excerpt from his speech in Damascus from before the war.

Previous Post Dr. Duke and Dr. Slattery on the Battle for New Orleans and the French elections

Next Post Dr. Duke on Firing of Comey & Zionist Media Total Silence on Clinton’s Treason in Support of ISIS & al Qaeda in Syria – Why every Patriot is Called an Anti-Semite?