Is there significant anti-Israel sentiment in organized Judaism? And — The Big Lie of “anti-Semitism!” 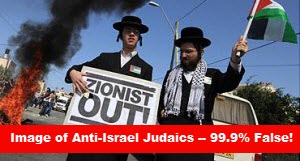 Pictures of Jews in Orthodox Jews holding up signs against Israel are pervasive on the Internet. But the truth is that groups like “Neutra Karta”are but the tiniest fraction of organized Judaism. So, the question is why are these images promoted? In fact, these false images distort the fact that Judaism is massively united behind the Zionist State of Israel and its crimes against humanity!

Not one synagogue in 5,000 would openly proclaim itself an enemy of the Israeli State. But, many people are fed the false impression that “true Jews” and organized Judaism opposes Israel and Jewish racist supremacism!

Dr. David Duke and Pastor Dankof go deeply into the myths about anti-Semitism instilled by the Jewish media conglomerates. Among the issues discussed:

Is it simply a Zionist problem or “Jewish problem?” — Is Zionism simply a political and state expression of Judaism? — Although are some disagreements among religious Jews on the Israel State, of ten of thousands of synagogues how many could be described as enemies of Israel?
In fact, in regard to that last question, far less than one percent of Jewish Synagogues could be classed as enemies of the State of Israel.

A great show today that will make you think deeply on many hidden aspects of the Jewish Question, including a fundamental question, why is Jewish religious opposition always exponentially exaggerated by some to suggest that true Jews, or true Torah Jews oppose Zionism when such religious Jews comprise only a tiny fraction of religious Jews. — To divorce the Zionist threat from Judaism and Jewish tribalism is a fundamental mistake of a portion of the anti-Zionist community and one probably instilled in us as misdirection by the Zionists themselves!

This is a show that would be a great one to share with friends in order to open up their minds.