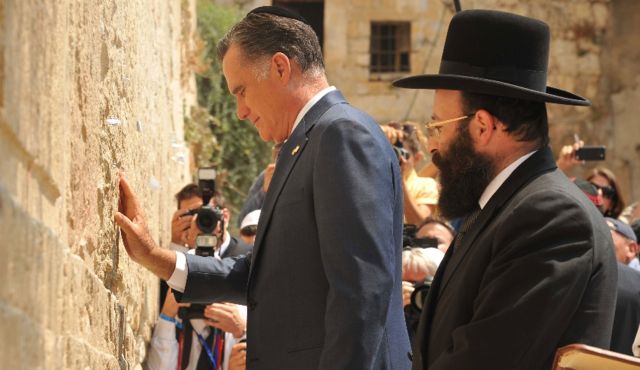 Mitt Romney is the ultimate traitor to every real American and every Republican who wants to stand up to the Neo-ZioCommies of the J-Left and NeoCon  ZioCons of the J-right. They  are the real deep rulers  of the Putrid Zio Swamp of the Media, Politics, Banking and Culture. A tyrannical superstate that is actively working to ethnically cleanse not only America but the entire Western White World.

Romney’s plethora of gold and Zionist backers has enabled him to worm his way back in Senate by moving from Massachusetts which is just short of 1930s Stalinism to Utah, where his deep pockets and connections could enable him to replace the chief Trump Republican critics Corker and Flake.

Where his campaign slogan to his fellow Mormons of Utah was vote for me cause I am a Mormon, even though I want Utah White Mormons and the entire United States to become no country for white men, much less Christians.

So Romney on the eve of his ascension to his role as the leader of the ZioControlled opposition to Trump has gone to the biggest enemy of every real Republican, real Christian and real White person, to join the Media Sanhedrin who will now go crazy with calls for the modern day Crucifixion of Donald Trump.

Every conservative must know that the NY Times, Washington Post, CNN, CBS MSNBC, NBC ABC are the sworn enemies of every so-called conservative issue and value. Even most of the Fox Network is pro-zionist to the hilt and in favor of the endless wars for Israel in the Mideast.

So what does Romney do, Romney sides with the ZioCommies and ZioCons and before he is even sworn in as Senator attacks Trump in vicious tirade titled:

Romney Immediately begins by condemning Trump for abandoning our allies by stop the massive killings of our own young men and men women and children in the Mideast. In America you have to bow down to Zion first.

The Trump presidency made a deep descent in December. The departures of Defense Secretary Jim Mattis and White House Chief of Staff John F. Kelly, the appointment of senior persons of lesser experience, the abandonment of allies who fight beside us, and the president’s thoughtless claim that America has long been a “sucker” in world affairs all defined his presidency down.

He praises the appointment of Zio sycophants such as Nikki Haley, and the appointment of the head biggest criminal bank on Earth, Gary Cohn, all of which was Trump’s biggest betrayals of the America First Policies he promised. He then praises the tax-cut which gave 85 percent of tax cut to the richest 1%, the very oligarchs, about 50 percent of whom are from Jews less than 2% of the population.  Great! he knows people are aware of China and does as a tip to populists say that Trump was right to crack down on “unfair trade practices” with China, but doesn’t dare to mention that our supposed ally Israel (who commits terrorism against us and supports ISIS) has been stealing and selling our technology and advanced to Communist China, but of course, nobody in the controlled ZioMedia mentions Israel’s big alliance with China.

Then Romney condemns Trump saying that only 16 percent of the people in white nations like Canada, and European nations  say Trump is “not doing the right thing in foreign affairs.”

No one is more critical of aspects of some parts of Trump’s foreign policy than I, but there is no doubt that Trump has inspired and helped massive gains by European Patriots in the Politics across Europe. all of the controlled Ziomedia including the Washington Post bemoans and wails the rising nationalism across the entire Western World.

Romney just like his Ziomasters at the Washington Post does not want nationalism and America First, but unbridled International Jewish Globalist Supremacy.

Finally, Romney instead of condemning the Shut down of free speech by the Jewish Global media and establishment he promotes freedom of the “Press” by which he means the Jewish “Fake News” media, which really means no free speech for anyone in the world except the Jewish megabillion dollar oligarchs of media.

Instead of condemning the Democrats and the media for the ultimate racism of intentional ethnic cleansing of European Americans and European Europeans, he condemns Trump for “racism” and “divisiveness” There is not a word about the massive racial discrimination going on against both white men and women and the sexual discrimination going on against white men in hiring, promotions, college admissions and every aspect of life.  Nor is there a word by Romney about the vicious hate propaganda by massive Jewish global media demeaning, condemning, even urging violence against white people.

No, it is Trump’s racism that Romney fears!

I will speak out against significant statements or actions that are divisive, racist, sexist, anti-immigrant, dishonest or destructive to democratic institutions.

Romney is a traitor to America and the people who made America Great, and to all the European people worldwide who gave us the beauty and magnificence of Western Christian Civilization. Some day, when we take back our country, our congress and our courts these politicians will be hauled before true Courts of Justice and given the legal punishments prescribed for the traitors they are. We thirst for the day when we witness his downfall and all the traitors participating in the genocide of our people! It will happen, we will make history in America and across the European world.