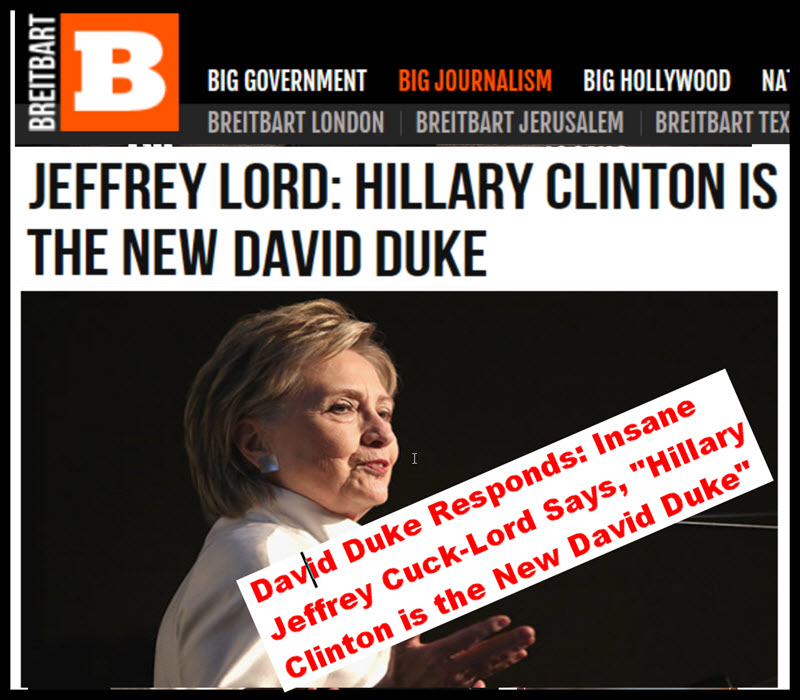 In it he says that Clinton is David Duke because she is blaming her defeat on white people as David Duke blames blacks. Actually, I won a number of elections and I don’t blame blacks for any defeat: I blame the Zio masters of the fake, lying media and disgusting sellouts like Jeffrey CuckLord who would condemn both historic Democrats and Republicans who have dared to defend white heritage and white people in this nation.

Jeffrey CuckLord goes on to say Clinton is like me because she and the Democrats use identity politics to mobilize their block votes from Blacks, Mexicans, Jews and LGBT identity freaks. Therefore, if I simply dare to defend our own people and heritage from the relentless, vicious assault upon us and our heritage I am like Clinton?

What is the great evil of David Duke? Is it that I recognized and warned America years ago of the purposeful ethnic cleansing and out-numbering of Whites from our own nation? Is that I dare to object to the hateful anti-white identity politics promoted by the Jewish Supremacist mass media and political establishment? Is it because unlike any member of Congress I dare to fight against the massive racial discrimination of white people in America?

So this makes Hillary Clinton, the “New David Duke.”

On any issue is Hillary Clinton really = to David Duke? Utterly absurd!

Let’s see, so when George Washington led the effort to fight for the American people, he was the new King George?

The sick Jeffrey CuckLord then condemns all those terrible racist Democrats who actually defended America as a White country and those famous Democrats who defended the basic civil rights of White people. .

Of course, The CuckLord deceitfully leaves out the great majority of Republican political leaders who defended the existence and heritage of White people.

The CuckLord doesn’t mention that his so-called “greatest Republican of all time,” Abraham Lincoln, made the following demands for a White America in his message to Congress on December 1, 1862 in which he said:

“That portion of the earth’s surface which is owned and inhabited by the people of the United States is well adapted to be the home of one national family; and it is not well adapted for two, or more. I have urged colonization of the Negroes, and I shall continue. My Emancipation Proclamation was linked with this plan …

I can conceive of no greater calamity than the assimilation of the Negro into our social and political life as our equal … We cannot attain the ideal union our Fathers dreamed, with millions of an alien, inferior race among us, whose assimilation is neither possible or desirable.” 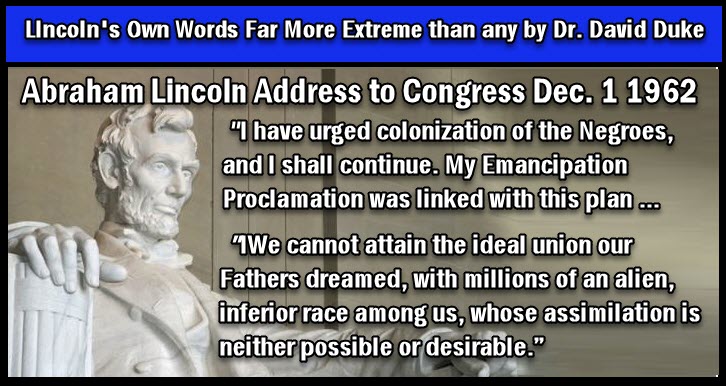 It is the height of hypocrisy that Jeffrey  CuckLord condemns me and lauds Lincoln even though nothing I have ever written sounds nearly as extreme as did his hero Lincoln as quoted before Congress.

Lincoln went on to propose an amendment to the Constitution that  would appropriate money and send free Blacks, with their consent, to places outside of the United State.

General Benjamin Butler reported a conversation with the President in early April of 1865, by which time the war had been won and Lincoln’s assassination was only a few days away. Lincoln said to him,

“But what shall we do with the Negroes after they are free? I can scarcely believe that the South and the North can live in peace, unless we can get rid of the Negroes.”

At the time of Lincoln’s assassination he and the Republican Party sponsored Legislation in the U.S. Congress to repatriate the Black people in America to Africa.  Lincoln believed that the races were very different and true human rights meant that black people should control their own destiny and live in a nation where they would be free to have a society that naturally reflected their own fundamental nature and interests.

Of course, he believed that Whites  also had the innate human right to live in a nation that naturally reflected their own heritage, values and interests.

Only Lincoln’s assassination prevented the passage of the bill, as corrupt Republicans knew that they could only maintain their autocratic control of Congress by suppressing the right of most white Southerners to vote in what was the dark, corrupt, nightmare days of “Radical Reconstruction.”

Of course, we live in a dystopian, corrupt Big Brother tyranny in 2017 that is little different than the lies of Big Brother in Orwell’s 1984.

ZioSpielberg’s movie biopic, Lincoln, mentioned none of Lincoln’s true views about race and not a word about the fact that Lincoln and Republican Party were committed to repatriation of Blacks to their own nation in Africa so as to preserve our own white nation.

As Orwell said very well in speaking about tyrannical control of media:

In collaborating with the outnumbering and ethnic cleansing of white people from the nation our forefathers created, Jeffrey CuckLord is the one who is equal to Hillary Clinton. Jeffrey Lord = Hillary Clinton.

No wonder that although I am headlined and attacked almost every day in the media by both liberal democrats and cuckhold republicans, now you know why I am never allowed to appear on Network debates in defense of my views.

The fact is the facts are on my side and on the side of the American people who are losing the nation their own forefathers created.