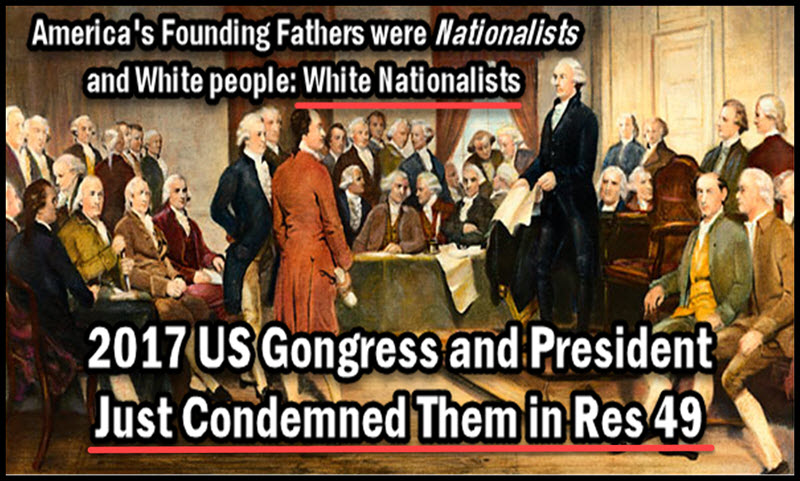 The Congress of the United States of America and the president of The United States Donald Trump signed into law a resolution condemning America’s founding fathers. The resolution attacked the alt-right who represent most closely the beliefs and values of America’s founders. instead of condemning the antifa communist domestic terrorists, the joint resolution condemned thousands of people whose rights of free assembly and free speech were denied by a government/ political police tyranny in league with Marxist domestic thugs and terrorists.

1. The founding document of America is The Declaration of Independence that defends the right of every people, and of our people to have a government in our own people’s  and national interest.

2. The Declaration is a radical nationalist document that declared independence from the globalist British Empire and established an independent nationalist nation dedicated exclusively to the interests of the people of that nation.

3. America’s founding fathers were radical anti-globalist nationalists epitomized by the father of our country, George Washington whose farewell address warned Americans to avoid foreign alliances and foreign wars and to always defend the interest and heritage of the United States of America.

4. All the signers of the Declaration of Independence and the Constitution of the United States were white and they were nationalists.

5. One of the first laws enacted by the writers of our Constitution of United States was the Immigration Act of 1790 that limited immigration to America exclusively to white people. So by any definition they were “White Nationalists.”

The First Immigration Act (1790) in Section 1 required that immigration and citizenship was granted only to a  “free white person.”

6.  Even the “Great Emancipator,” Abraham Lincoln,  repeatedly talked about the absolute necessity to preserve America as a “white nation.”

In fact the controlled media and Hollywood establishment never even speaks about the fact that at the time of his assassination, Lincoln and the Republican party had a bill pending before the United States Congress to repatriate all the freed slaves in the United States back to Africa. This bill was supported by both Lincoln, the Republican party and the Democratic party of the U.S. Congress. Only his assassination prevented this bill from becoming law. Actually, the resolution passed by Congress is a condemnation of Abraham Lincoln who would by today’s standards be referred to as “white nationalist.”

8. Our founding fathers believed in free speech and free assembly. The resolution had no criticism of the communist terrorists of Antifa and Black Lives Matter who committed the real domestic terrorism in Charlottesville. The alt-right does not try to prevent any exercise of communist speech. The Alt-Right were the ones attacked and denied constitutional right of freedom of speech and assembly. The Alt-Right today represent the core principles of the founding documents of the United States of America and the founding fathers who created America, albeit many are far more moderate than the white nationalist founders of America.

9. This resolution was nothing more than a racist declaration of war against United States of America and our people whose forefathers created our great country.

10. Our founders naturally intended the country to be for their own people just as every non-white country does and as does the Jewish State of Israel. The resolution exposes the hypocrisy of both the controlled media and the controlled politics of America today, where no politician dare to defend “white people.”

It is time to realize that the media, politics, and financial establishment is at war with us and our heritage.