Judaized America: you cannot put up Christian Christmas symbols in public places – But Jews can put up Hanukkah symbols and have Jewish religious rites of Hanukkah, which is a celebration of Jewish racism and mass murder of Gentiles as well as murder of Jews who dare to assimilate with Gentiles. 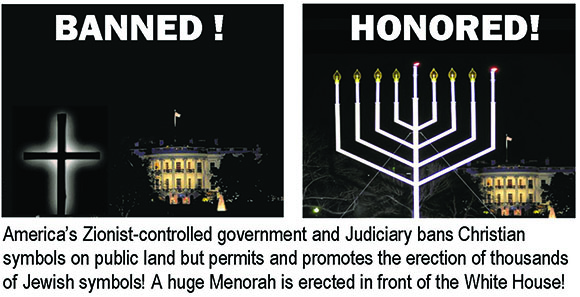 The now annual “menorah lighting” ceremony due to take place today in front of the White House is the most blatant and obvious display of Jewish Supremacist hatred and arrogance in America, rooted as it is in the “Hanukah” festival of hatred and murder against non-Jews.

Today’s ceremony—due to kick off at 4pm EST, will even feature Vice President Joe Biden taking part in the lighting ceremony, who has been drafted in as a potent symbol of just how extensive the Jewish Supremacist control of the US government is.

All over the world, in nearly every western nation, public menorahs are being erected and lit up at this time—and the Zio-media plays along with the storyline that this is some sort of secular symbol which symbolizes “light overcoming darkness” as if to equate it with the spirit of Christmas and brotherhood.

In fact, the menorah is one of the most potent symbols of Jewish extremist hatred—of non-Jews, and even those few Jews who do not hate Gentiles enough! 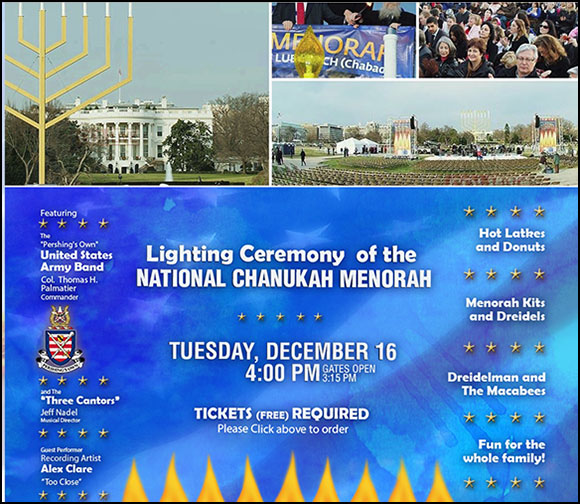 The origin of Hanukah and the menorah begins in the reign of Alexander the Great, who lived from 356–323 B.C.

The famous Macedonian general conquered Syria, Egypt and Palestine, but allowed the lands under his control to continue observing their own religions and retain a certain degree of autonomy.

Under this benevolent rule, some Jews started assimilating Hellenistic culture, adopting the language, the customs and the dress of the Greeks.

This process carried on for about a century, until the time of the reign of the Sluecid Macedonian Antiochus IV.

A Jewish nationalist grouping under Mattathias the Hasmonean and his son Judah Maccabee led a revolt against both the assimilation of the Hellenistic Jews and the Seleucid government.

After many bloody massacres—committed by the Jewish zealots—against both the Seleucids and those Jews who had dared to assimilate with the hated Gentiles, the Jewish uprising was successful and Jerusalem taken as a nationalist stronghold.

All of this is historical fact up to this point. Fiction now kicks in in the Jewish narrative, because then, “according to tradition as recorded in the Talmud,” at the time of the rededication of the Temple in Jerusalem, there was “very little oil left that had not been defiled by the Greeks.”

By “defiled,” the Jewish extremists meant that the oil was no longer holy, having been touched or in contact with the hated “unclean” Gentiles.

The oil was kept “holy” by not letting any goyim near it—just like many other parts of Jewish culture and society today, particularly “kosher” foods, where non-Jews are not allowed to touch certain objects without making them “unclean.”

The oil was needed for the Jewish ritual candle, called the menorah, which is one of the oldest religious symbols of Judaism. The menorah is supposed to burn throughout the night every night, but because the Gentiles had “defiled” the oil, there was only enough “holy” oil to burn for one day.

However, the Jewish extremists believe, the oil burned for eight days in a “miracle”—the exact amount of time to “prepare” a new batch of “clean” oil which had not been touched by the Goyim.

An eight day festival was declared to commemorate this “miracle”—and thus the lighting of the menorah became the celebration of the victory of Judaism over its Gentile Seleucid enemies and those few Jews who had become assimilated into the non-Jewish world.

According to the official Chabab website, the hatred, violence and opposition to assimilation as celebrated in Hanukah (or “Chanukah”) is explained this way:

In other words, while the Christian world celebrates Christmas, Peace on Earth and Goodwill toward Men, the Jewish Supremacists celebrate of Chanukah, the massacre of Jewish enemies.

While Christmas crosses and manger scenes are prohibited on public grounds—even though America still is an overwhelmingly Christian nation, a giant Jewish menorah is erected on public ground in front of the White House, the oldest symbol of the Judaic religion.

Not only is this a clear violation of the separation of church and state rule—the same rule which the Jewish Supremacists used to get all Christian symbolism removed from public places—but the menorah symbol is itself deeply associated with Chanakuh, the celebration of the victory of the Maccabees, the ultra-racist Jewish radicals who massacred both the Greeks and the Jews who dared to assimilate with them.

Hanukah and the lighting of the menorah actually celebrates the murder of the Greeks not because they tried to kill or harm Jews, but because they accepted Jews, married with them, allowed them in their educational intuitions.

The Maccabbes saw this as a threat to the Jewish bloodline, so they rose up in revolt and deliberately murdered the Greek intelligentsia as well as Jews who were friendly with them. 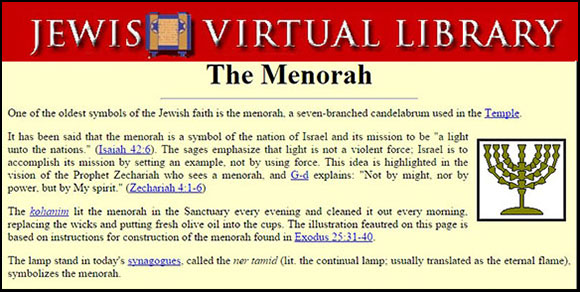 [O]ne of the oldest symbols of the Jewish faith. . . It has been said that the menorah is a symbol of the nation of Israel and its mission to be “a light unto the nations.”

Precisely because it is an obvious religious symbol, the annual lighting ceremony in front of the White House, which first started in 1979, initially became a source of controversy, opposed by many who saw it as a precedent-setting breach of the constitutional separation of church and state. In 1989 however, the US Supreme Court ruled that it was a “secular” symbol!

Even the Jewish Daily Forward newspaper admitted that this was outrageously incorrect, saying in an article that: 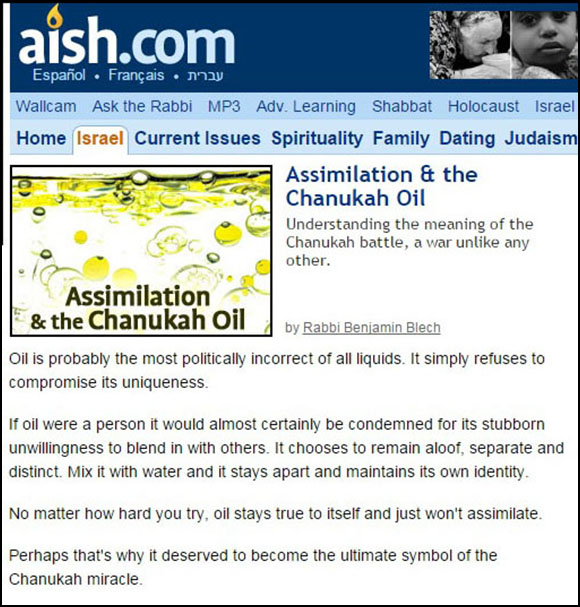 Rabbi Benjamin Blech, a Professor of Talmud at Yeshiva University, has openly admitted the Jewish Supremacist message of Hanukah and the menorah. In an article written for the Jewish news source Aish.com titled “Assimilation & the Chanukah Oil,” he put it this way:

Oil is probably the most politically incorrect of all liquids. It simply refuses to compromise its uniqueness.

If oil were a person it would almost certainly be condemned for its stubborn unwillingness to blend in with others. It chooses to remain aloof, separate and distinct. Mix it with water and it stays apart and maintains its own identity.

No matter how hard you try, oil stays true to itself and just won’t assimilate. Perhaps that’s why it deserved to become the ultimate symbol of the Chanukah miracle.

When we celebrate the victory of the Maccabees over the Syrian Greeks, we need to remember what was really at stake in this major confrontation.

This was a war unlike any other. It wasn’t fought to conquer more territory. It wasn’t meant to capture more booty or bodies. This was ultimately a conflict between two totally different ways of viewing the world.

The story of Chanukah is all about a clash of cultures. The Greeks weren’t out to kill the Jews. Their intent wasn’t genocide of a people.

Sad to say, there were Jews who were seduced by the seductive wiles of secularism and forsook their ancient heritage. They assimilated – and haven’t been heard from since.

The victory of the Maccabees was the triumph of those who exemplified the unique characteristic of oil and refused to assimilate, and instead chose to remain steadfast in our mission to bring the moral vision of Judaism to the world.

Like the oil of the Chanukah story, we dare not assimilate.

In other words, what Hanukah and the lighting of the menorah is really all about is Jewish extremists celebrating the murder of non-Jews and those Jews who assimilated.

It has nothing to do with the “victory of darkness over light” or any of the other made-up excuses which they and their Zio-media say: and by participating in the lighting ceremony—never mind actually having it in front of the White House, after all Christian symbols are banned—is nothing else but a demonstration of Jewish Supremacist power, hatred and arrogance over the non-Jewish world.

Perhaps the best summary of Hannukah, the menorah and its meaning is contained in the

Ma’oz Tzur (Rocky Fortress) song, sung by Jews during Hanukah. According to the Jew FAQ website, its words are as follows:

Restore my House of Prayer

And there we will give thanks with an offering

When you have prepared the slaughter

for the blaspheming foe

Then I will complete with a song of hymn

the dedication of the altar

Note the line: “When you have prepared the slaughter for the blaspheming foe”—this is what the Jewish Supremacists celebrate with the lighting of the Menorah and Hanukah.