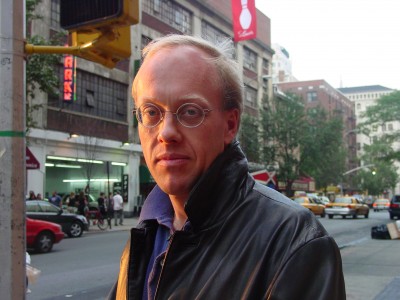 “They will attack the excesses or the foibles of the system, but they are never going to expose the system itself because they are all millionaires, they are commercially supported.”

This is the essence of controlled opposition: to capture the discontent of those with legitimate grievances against the system and channel it in a way that is not threatening to the system.

Hedges is a self-described socialist, and the system that he faults Colbert and Stewart for not exposing is capitalism. The interview in which he attacked Colbert and Stewart starts with a discussion of his article “Let’s Get This Class War Started,” and he quoted the wisdom of the Jewish anarchist communist Emma Goldman.

There is much to be criticized about the capitalist system, but what about the Zionist system? Hedges was the New York Times Middle East bureau chief for four years, and he is a frequent and harsh critic of the Israeli government and the Zionist project in the land that once was Palestine.

However, there is much more to Zionism than Israel. Zionism is the system of Jewish tribalist control over so much of the globe, and Hedges would have first-hand experience with Jewish supremacism here in America, whether it be at New York Times headquarters or his alma mater of Harvard University.

Yet Hedges does not utter a word about Jewish supremacism in the United States. Why? When criticizing the Iraq War, why not mention the Jewish background of its neocon architects? When celebrating occupy Wall Street, isn’t it worthy of mention that Wall Street is basically Jewish casino run by a completely kosher Fed? When calling Hollywood pop culture “commercial crap,” would it be too hard to mention that the media conglomerates are run almost to a man by Jews?

To ignore these facts that he is certainly aware of, Chris Hedges is actually doing the very thing that he faults Colbert and Stewart for. He is exposing the foibles of the Zionist system but not the system itself. It may be that he has held a romantic view of revolutionary Jews like Emma Goldman for so long that he can’t bring himself to let go. Or it may be that he still depends on elements of the Zionist media for income and access to an audience.

Whatever the case, we need people like Hedges to stop checking their outrage at the door when it comes to Jewish supremacism. The key to Jewish supremacist power is the taboo on discussing it. Sure, Helen Thomas and Rick Sanchez saw their careers effectively ended after crossing the line, but Thomas was already 89, and Sanchez was more of a presenter than an opinion maker.

Someone like Hedges — energetic, influential, and in the prime of his career — could muffled but not silenced. At some point people like him have to realize the can do far more good speaking what they know to be full truth even to a greatly diminished audience rather than self-censoring on national television.

The fact is that there are a multitude of influential people representing a variety of perspectives and ideologies who know the score and could be so valuable in educating their audiences about problem of Jewish supremacist power, who in fact speak eloquently about peripheral issues like Israel, the Federal Reserve, cultural deterioration, and whatnot, but refuse to break the taboo against mentioning Jewish tribalist power. While some of their followers may be able to read between the lines, the great bulk of their audience, I am afraid, remains in the dark about this most fundamental issue.

Previous Post Hear Dr. David Duke on How to Live a Great Life—and on Jewish Racism