The so-called “chickenshit crisis” between Israel and America—caused by a report quoting an anonymous US government official insulting the Israeli Prime Minister by using that word and calling him a “coward”—is nothing more than a tempest in a teacup squabble between two factions of Jewish Supremacists, each differing from each other only so far as how they wish to present their ruinous ideology to the non-Jewish public. 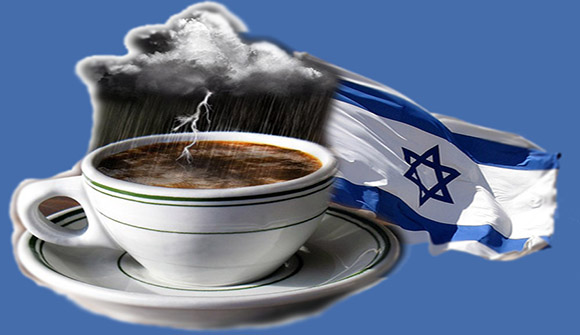 The supposed crisis was caused by a report written by Jeffrey Goldberg in the Atlantic magazine, in which an anonymous US government official was quoted as saying that the “thing about Bibi is, he’s a chickenshit,” referring to the Israeli prime minister, Benjamin Netanyahu, by his nickname.

According to Goldberg—who has also written for The New Yorker, the Jewish Daily Forward and The Jerusalem Post—the comment reflects the Obama administration’s “red-hot” anger over Israel’s settlement policies.

Goldberg warned that “Profound changes in the relationship [between Israel and the US] may be coming.”

Ironically, Goldberg went on in the Atlantic article to say that the reason for the supposed change in the “relationship” was due to Netanyahu’s indecisiveness, rather than anything else—and that this indecisiveness and “unwillingness to pull the trigger” was the reason why the US administration was supposedly changing its attitude towards Israel.

This official agreed that Netanyahu is a “chickenshit” on matters related to the comatose peace process, but added that he’s also a “coward” on the issue of Iran’s nuclear threat. The official said the Obama administration no longer believes that Netanyahu would launch a preemptive strike on Iran’s nuclear facilities in order to keep the regime in Tehran from building an atomic arsenal. “It’s too late for him to do anything. Two, three years ago, this was a possibility. But ultimately he couldn’t bring himself to pull the trigger. Now it’s too late.”

In other words, the “chickenshit crisis” is because Netanyahu was not extreme enough for this unnamed official!

Of course, none of these allegations by Goldberg—of a supposed “change in relationship” or the reason for any cooling off in relations between Netanyahu and the Obama administration have any foundation in reality.

The real reason for any minor friction between the two “partners” is not over any fundamental issue—such as Zionist racism, the ethnic cleansing of the Palestinians, the ongoing subsidy of billions of dollars in American “aid” to Israel—but rather a minor tiff between right wing Zionists and even more extreme right wing Zionists.

There is no dispute over any of the core issues—just on how best to present them to the non-Jewish world so as to cause as little trouble for Jews as possible. The “Labour Party” supporting clique—whom the Obama administration favors—argue that Israel should not be so blunt and open about oppressing Palestinians and ethnically cleansing them from their land, while the “Likud” supporting clique—more in favor with the Republican party types—argue that Israel needs to be even more openly aggressive in dealing with “enemies of the Jews.”

Both cliques however unconditionally support Israel and all the fundamental issues which underpin Jewish Supremacism: hatred of Gentiles, a conspiratorial worldview which believes that all Gentiles are “out to get them,” and a deliberate policy of discrimination against non-Jews in favor of Jews in Israel and in all other nations in which they live.

As the Israeli-based Times of Israel was quick to point out, “Democrats and administration officials rushed to distance themselves Wednesday from profane anti-Netanyahu remarks attributed to a senior administration official one day earlier  – and argued against the conclusion that US-Israel relations were in an unprecedented crisis

* The almost total lack of coverage in the Jewish Supremacist controlled mass media directed towards Gentiles of the “chickenshit crisis”—has served as one of the more perfect examples of Jewish media control in recent times.

Although a very few outlets have carried mention of the Atlantic article’s allegations, none have dared address the fact that the Obama administration has in fact done more to support Israel possibly than any other previous administration in history.

This support has included increasing military aid to the racist Jews-only state, upping the “aid” package even though the US economy is bankrupt, vetoing UN resolutions condemning Israel for war crimes in Gaza, and a whole host of other measures designed to cover for the Jews-only state at every eventuality.

Next Post Hear Dr. David Duke and Don Black on How to Overthrow the Zio-Tyrants!