The “unprecedented” distribution of Dr. David Duke’s videos of Jewish Supremacist influence in America and on the Gaza conflict may herald a “sudden transformation in American-Israeli relations,” the Chicago Tribune newspaper has announced. 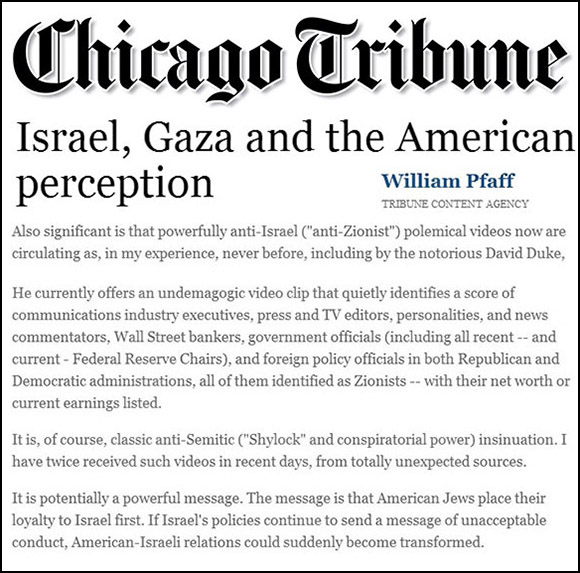 The Chicago Tribune is the most-read daily newspaper of the Chicago metropolitan area and the Great Lakes region and is currently the eighth-largest newspaper in the United States by circulation. Its printed edition reaches 448,930 daily readers and 853,324 in its Sunday edition, while its website has an Alexa ranking of 1,253 in the world, and 320 in the US. The paper is, therefore, a major player in the mass media market.

The newspaper’s commentary, titled “Israel, Gaza and the American perception” was written by William Pfaff, called the “dean” of American columnists and commentators. Pfaff also writes for The New York Review of Books, and has contributed to Foreign Affairs, World Policy Journal, The National Interest, and previously was a twenty year veteran political essayist for The New Yorker magazine.

Pfaff’s article, written in the light of the continuing human rights violations and war crimes of the Zionist Supremacists in Israel, starts off by discussing the “Israeli attacks on a hospital and refugee camp playground in Gaza” and Benjamin Netanyahu’s promise that this will be a “a prolonged campaign.”

“If it is, Israel may find itself considered, even by Americans, a pariah state,” Pfaff says, then listing the mounting atrocities and murders committed by the Zio-terrorists in Gaza, including an overview of their tactics of bombing UN installations, which, he says, is “no novelty”—the Jews-only state did exactly the same thing in 2008–2009, he points out.

“This practice is presumably meant to keep foreign witnesses at a distance,” Pfaff says. “It also is true for the foreign press, where Israel limits facilities and uses its influence with foreign owners of television news operations, newspapers and press agencies to block or influence reports of sensitive matters.

“A front-page story in the International New York Times, dealing with the problems in contemporary news reporting, mentioned NBC’s Ayman Mohyeldin, an Arabic-speaking and vastly experienced correspondent who was suddenly ordered out of Gaza after sending reports on the apparently arbitrary killing by an Israeli gunboat of four Palestinian boys playing football on a beach. His rushed replacements were non-Arab-speaking reporters and unacquainted with the local scene.”

Pfaff then goes on to say that the “Israel Lobby” is losing the propaganda war. He then makes the startling admission that Dr. David Duke’s videos on the topic are circulating at an “unprecedented rate.”

“”Also significant is that powerfully anti-Israel (“anti-Zionist”) polemical videos now are circulating as, in my experience, never before, including by the notorious David Duke,” Pfaff, says, making the obligatory reference to Dr. Duke’s long repudiated and youthful former political association. He then moves on the real point:

“He [Dr. Duke] currently offers an undemagogic video clip that quietly identifies a score of communications industry executives, press and TV editors, personalities, and news commentators, Wall Street bankers, government officials (including all recent—and current—Federal Reserve Chairs), and foreign policy officials in both Republican and Democratic administrations, all of them identified as Zionists—with their net worth or current earnings listed,” Pfaff says.

“I have twice received such videos in recent days, from totally unexpected sources.

“It is potentially a powerful message. The message is that American Jews place their loyalty to Israel first. If Israel’s policies continue to send a message of unacceptable conduct, American-Israeli relations could suddenly become transformed,” the Chicago Tribune columnist concludes.

The video to which Pfaff refers can be seen below.

Next Post Hear Dr. David Duke on How the World is Waking up to Zio-Extremism – Today Ken O’Keefe!