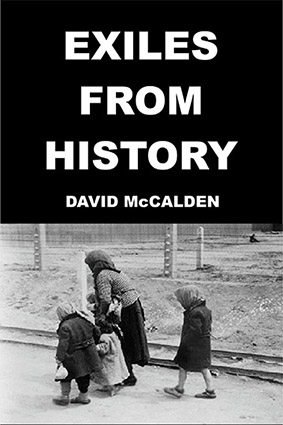 Exiles from History by David McCalden is a remarkable tour de force which investigates the underlying psychological causes of Jewish behavior—and why that community has always engendered strong counter-reactions wherever they have gone.

The cover image serves as a metaphor for the book: it has appeared in a multitude of philo-Semtic books, usually with the caption “On the way to the Gas Chambers” (e.g. The Yellow Star, Gerhard Schoenberner, Corgi, 1978, p. 144).

The image is from a collection of semi-official photographs taken at Auschwitz, a collection which was later published as The Auschwitz Album (Random House, 1981).

The original Germans caption of this picture said it depicted Jewish internees being processed for admission to the Auschwitz combined labor and internment camp. The Germans made no mention of “gas chambers” whatsoever.

Exiles from History explores why it is that Jews always assume the worst. Why is if that throughout history, Jewish have assumed or imagined that non-Jews wish to “Holocaust” them?

The answer, the author suggests, lies in the field of Psychohistory and the synchronicity of events and attitudes throughout the history of one particular social group: the Jews.

McCalden suggests that the phenomenon of “anti-Semitism” is not in fact something that is generated by non-Jews and directed against Jews, but is in reality a Jewish internal phenomenon based on Jewish self-hate, and then projected onto non-Jews in order to avoid facing up to it and therapeutically dealing with it.

He argues that Jewish self-hate is the root of Jewish paranoia, which in turn leads to Jewish megalomania — always wanting to be in charge and in control for fear of what might otherwise happen . . .

On a global scale, this neurosis leads to profound injustice for innocent people such as the Palestinians, and if allowed to go unhealed, could well lead to a World War Three.

McCalden sympathetically examines the Jewish neurosis down through the ages. He traces their obsession with “Holocausts” and “gas ovens” back to Biblical myths.

He illustrates his thesis with in-depth psychological appraisals of three towering Jewish personalities who have left a significant mark on modern thought: Karl Marx, Leon Trotsky and Sigmund Freud.

He goes on to epistemologically examine the movements these men have spawned: Communism and Psychotherapy, and shows how these movements even today bear all the imprints of their originators’ neuroses.

In the last part of this study, David McCalden highlights modern Jewish behavior patterns which fit the mold of Jewish neurosis with an uncanny synchronicity, with chapters on: Sex, Power and Holocausts.

In his final summary, he provides a possible explanation for Jewish psychological dysfunctions, and suggests a series of “models” whereby one can recognize the various manifestations of the Jewish neurosis.

He suggests a solution; a solution which not only will head off a reaction of real anti-Semitism, but which could very well head off World War Three.