The sudden backtracking by US Secretary of State John Kerry on his mild remark that Israel might become like an “Apartheid” state if current peace talks with Palestinians failed, highlight the fact that the Jews-only state and its lobby in America have overwhelming influence in the corridors of power.

Kerry-Cohen’s remark, made during a meeting of the Trilateral Commission, which includes senior officials from the United States, Europe, Russia and Japan, was reported as follows:

“A two-state solution will be clearly underscored as the only real alternative, because a unitary state winds up either being an apartheid state with second-class citizens or it ends up being a state that destroys the capacity of Israel to be a Jewish state.”

Despite this comment actually been massively pro-Israeli—in the sense that it calls for measures to protect and enhance the Jews-only state—his comparison to “Apartheid” immediately drew the ire of the largest Jewish lobbies in America.

Of course, even this comparison is false—the South African apartheid state never phosphorus bombed black people, or committed the wholesale ethnic cleansing and other crimes of which Israel has been, and is still guilty.

Nonetheless, the American Israel Public Affairs Committee, the National Jewish Democratic Council and the U.S. House of Representatives majority leader and the most senior Jewish official in government, Rep. Eric Cantor (R-Va.), all joined together in condemning Kerry. 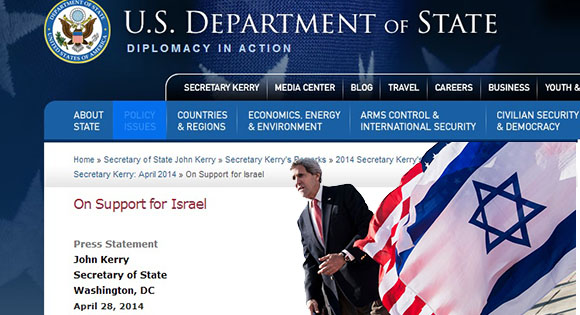 In face of the uproar, stirred up by the Jewish Supremacist-controlled media, Kerry-Cohen immediately backed down, and issued a statement on the US State Department website titled “On Support for Israel.”

This statement revealed completely not only the effect of the pressure of the Jewish Lobby in Washington DC, but also contained a number of admissions by Kerry-Cohen as to the true nature of the “Jewish state.”

Kerry-Cohen’s statement said that he believed that a “tow-state” solution was the only answer to the Israeli-Palestinian conflict—because if Israel allows Palestinians to live in it as equal citizens, it would destroy the “Jewish state.”

In other words, Kerry-Cohen admitted outright that the Zionist Supremacists must have a Jews-only state—a Jewish ethnostate—in order to survive.

Yet this is something that they—and the Jewish Lobby in every other country—actively seek to deny to all other people on earth.

As Kerry-Cohen said: “In the long term, a unitary, binational state cannot be the democratic Jewish state that Israel deserves or the prosperous state with full rights that the Palestinian people deserve.”

Here we have the Secretary of State of what still is the most powerful nation on earth, quickly pulled into line for daring to make a comment which actually is supportive of Israel—and then issuing a groveling apology  in which he reaffirms the Zionist state’s right to exclude anybody but Jews from its population makeup.

To put this in perspective: what would Kerry-Cohen have to say if any other state on earth announced that it could not continue to exist if it allowed Jews inside its borders?

Any such state making an announcement of that nature would probably be bombed.

But because the Jewish lobby is so powerful in America, it is not even the Israeli state which has to make a claim saying that the presence of Palestinians will lead to the destruction of the “Jewish state”—no, such statements are left to be made by the US Secretary of State himself!