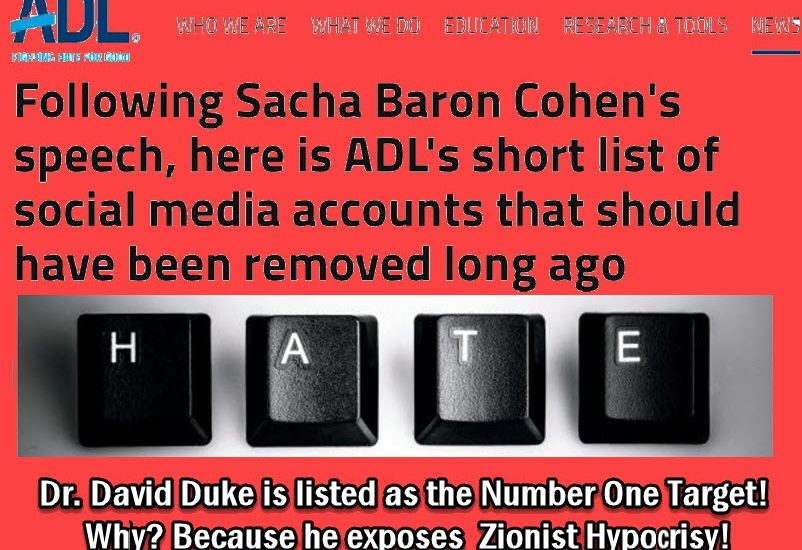 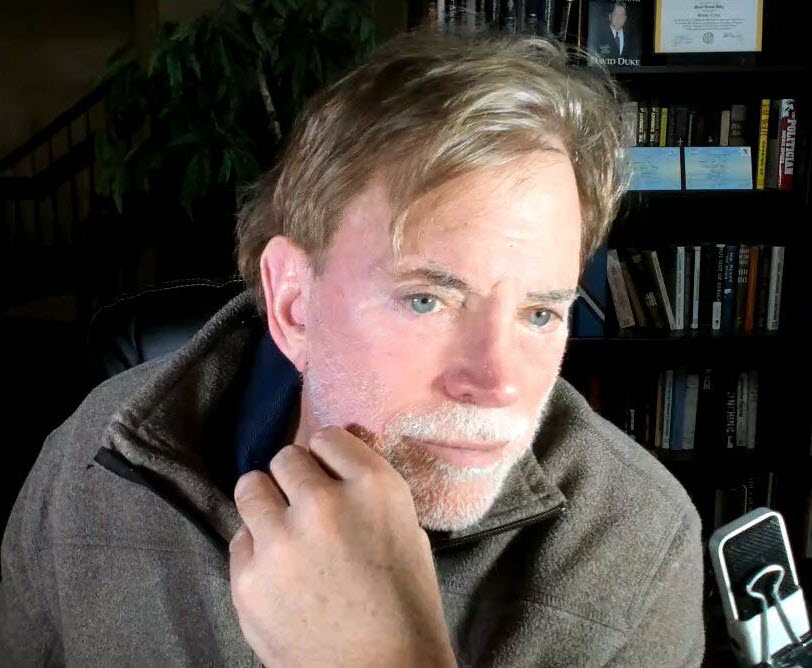 The ADL has just given me the equivalent of the “anti-semite” of the year award. In their short list of social media sites that the ADL recently demanded to be immediately shoahed – my site was listed first. 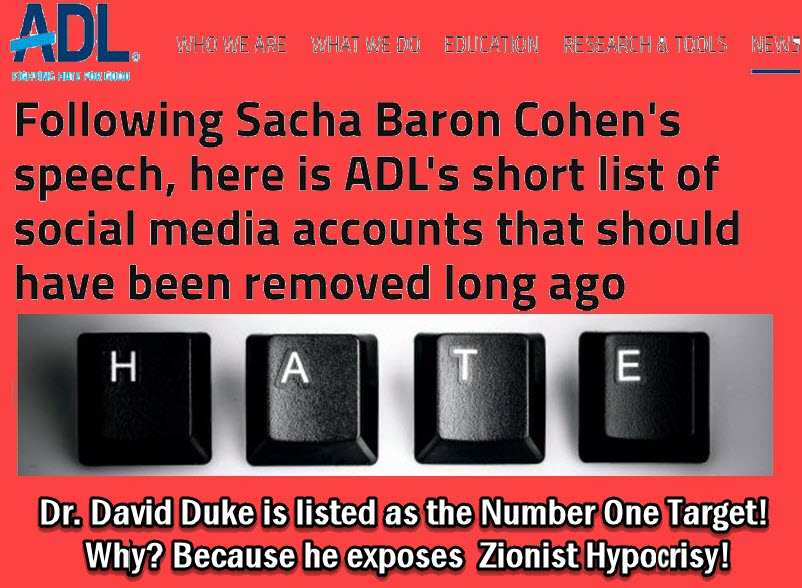 Since the ADL is a powerful, massively financed organization run by Zionist Extremist Partisans for the Jewish Ethno Supremacist State of Israel, I feel extremely honored that they have listed me the one this hate organization most hates. The truth is they know that expose with reason and facts their lies about Israel and its critics.

It must not be forgotten that the term anti-semite has become simply a blood libel to condemn anyone who dares to offer any criticism of the Jewish supremacist ethno state of Israel.

Because my arguments are so fact-based, logical, and dedicated to exposing the ultimate violations of human rights, such as the incomparable damage done to people in unjust horrific wars, I am simply called the ultimate smear term: antisemitic. And they want to ban my presence from the world. The reason Is obviously not because my work is hateful or violent. It was hateful, or ignorant or unreasonable or advocating violence, everyone would rightfully despise me. But when people actually read my writings and hear my own words, they know the truth when they hear it. And they actually hear far more than truth.

They hear a dedication to true human rights. Their honesty and decency and a passion for rights of my own people and all peoples.

They also see and hear me use my platform to incessantly to condemn violence as both immoral and totally counterproductive. Violence and destruction of the innocent is the direct opposite of human rights and justice. The truth is the ADL has incessantly supported the state of Israel and Jewish social organizations and publications that have screamed for endless wars in the Mideast and elsewhere.

I have travelled the world on behalf of peace.  I was one of the most outspoken opponents to the Iraq War. I said it is not a war for human rights but a war for Israel and based on lies. I was right. The Israel partisans are desperate to silence me. If my words would be allowed in the mainstream media, millions of lives might have been saved. It is the ADL and all the pro-Zionist organizations are the harbingers of war and massive violation of human rights. The truth I speak, and the moderate and effective manner in which is express it is why they want to totally silence my voice.

The ADL their most important, short list of social media that must be immediately shut down and silenced.

Why? Because although they created a fake Avatar of me, they know that if people read what I actually say rather than what they say I say, they will see the logic and humanity of my positions.

It is the height of irony and hypocrisy that the Anti-Defamation League of B’nai B’rith would have the nerve to attack anyone for quote, “racism or hate,” when the organization staunchly defends the Self-proclaimed Jewish State of Israel, a state totally based on genetics, genealogy, one that even uses genetic testing to prove inclusion in their ethnostate hierarchy.

There is no refutation of the fact that Israel was created by the brutal and murderous purposeful ethnic cleansing of 600,000 Palestinians from their own homes, farms, businesses, schools, churches and mosques.

The historical record is clear. Israel was created as an ethnostate on other people’s property. The Jewish State was created by terrorism, first against the British holders of the Palestinian mandate, as shown by the horrific terror bombing of the King David Hotel, and then committing massacres against the Palestinian men, women and children, such as Deir Yassin, to terrorize them and forcibly drive them from their own land.

After twenty years of terror and ethnic cleansing in their new Jewish supremacist ethnostate, they launched new terrorism and war to take over the West Bank, Gaza, the Golan Heights and other regions where almost no Jews lived, but the residents were of the wrong genealogy.

They drove them from the land and then erect massive Jewish settlements maintained and enforced by the Israel occupying force, which goes on to this day.

The Entire world, including the United States pronounced these acts as horrific human rights crimes and demanded Israel’s withdrawal. During this whole period, America and other nations justified launching massive wars against nations such as Iraq, but because of Zionist ethnic loyalties and their influence in media and politics, they get away we these crimes to this very day. And they don’t sanctioned for their crimes against humanity, they get more and more billions of our money.

The same NY Times and the leading, global media which proclaims racism as the greatest evil, says almost nothing about the fact that the Israeli settlements are totally segregated by race and ethnicity and allows no one non-Jewish ancestry to live on the stolen settlements which are situated right in the middle of their people’s lands and population. 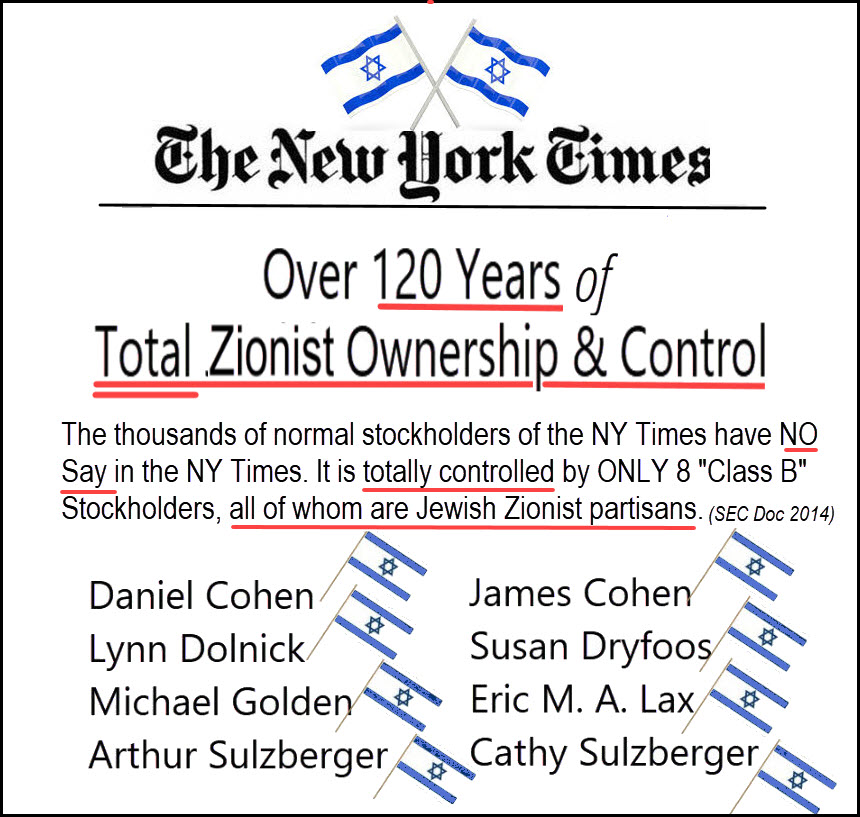 Now, you know why the ADL of B’nai B’rith wants to ban me from social media, because no one has been more dedicated to exposing the racist crimes of Israel, and the powerful Jewish ethnic nationalism that spans the globe, and repression that keeps the facts from reaching the American people. And, its not just me, there are many more great and courageous, honest voices on their list.

It is not enough for them to control the biggest organs of political propaganda the world has ever seen, global media and broadcasting, epitomized by Hollywood and global broadcasting companies such as CNN, and the three major American TV networks (all of which have Jewish Zionist executive control), the biggest sources of information and searchable information on Earth: Google and its subsidiaries like YouTube, Facebook all effectively owned and controlled by openly pro-Zionist partisans.

They also are incredibly influential in global publishing, such as the leading, most read and influential newspaper on the planet, the NY Times. It is totally controlled by the Sulzberger Family Trust, composed of eight Jewish Zionists who are open, active supporters and members of organizations dedicated to Jewish interests and the Jewish State of Israel. It is not an exaggeration to say that the NY Times was instrumental in supporting the catastrophic wars in the Mideast based on lies such as in Iraq, which resulted in the loss of millions of lives and were driven on behalf of Israel.

The reason why the ADL wants to silence me is because I also expose it as an organization that is an enemy of human rights.

The ADL is not even a group that truly supports justice-minded Jews. It works to silence all opposition to the racist Zionist fanatics and the racist ethnostate of Israel, and to silence those who say American policy should be made on behalf of American interests and human rights – not on the financial power and media power of Jewish Zionist Oligarchs and the foreign state of Israel.