By Staff — The beat goes on! More and more well-known and respected individuals are beginning to speak out against the crimes of Israel and the world wide ultra-racist Zionist, tribal network that has inordinate influence in media, government and international finance.

The Rev. Stephan Sizer a high official of the Church of England has become more and more outspoken against both the Zionist crimes against Palestine and the Zionist influence over the governments of the West that leads the world to war and ruin.

Rev. Sizer, has joined an increasing number of famous human rights activists all over the world in linking to the website and videos of Dr. David Duke. More and more people of statue and courage all over the world are recognizing Dr. Duke’s research, his books and his videos. In the past few months a leading 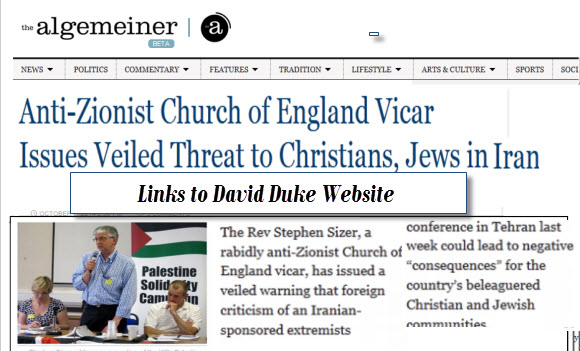 columnist in America, doctors who wrote an article in the Lancet medical journal exposing Israel, as Swedish politician, and many others in addition to Vicar Sizer has recognized the incredible work of Dr. Duke.

His recent videos have had over 1 million views which are viewer rated at over 96 percent, and millions more views from the hundreds of copies circulating all over the Internet.. Anyone who watches his videos instantly recognizes the truth of his well-documented research, and they can’t help but admire his courage.

A recent article in the Zionist mouthpiece newspaper and website, The Algemeiner attacks Vicar Sizer for pointing out the undeniable truth that the support of Zionist-controlled Western nations are endangering the Christian and even the Jewish community in the Mideast and other regions.

In a recent conference in Tehran, Iran, Vicar Sizer pointed out that the Zio policies of America, the UK and other nations has actually fostered the rise of extremists such as ISIS and al-Nursra in Syria and Iraq because Israel worked to destroy the governments of Iran and now Syria.

He also points out that when so-called Christian Zionists support Zionist crimes against Christians and Muslims in Palestine and Syria obviously, Christians and moderate Muslims are resented. The Christian communities in the Mideast which have existed from the time of Christ have never been in more danger because of the Zionist policies.

The Algemeiner of course twists his words into a threat against Christians when of course his actually words were that sponsor of Zionist crimes by mostly Christian countries actually leads to endangerment of both Christians and Jews.

Jews as well become resented because of the role of the leading Jewish organizations and Synagogues all over the world in supporting the Zionist onslaught.

Notice the twisting in this quote from the article:

The Rev Stephen Sizer, a rabidly anti-Zionist Church of England vicar, has issued a veiled warning that foreign criticism of an Iranian-sponsored extremists conference in Tehran last week could lead to negative “consequences” for the country’s beleaguered Christian and Jewish communities.

Sizer was one of the participants in the “New Horizon” conference, which brought together Holocaust deniers and conspiracy theorists from around the world. Many of the conference sessions were led by both right and left-wing extremists, who railed against the international influence of the so-called “Israel Lobby.”

It goes on to point out that Vicar Sizer has shared Dr. Duke’s work with millions of other people in the effort to wake them from the grip of Zionist media propaganda that hides the world’s most virulent racism.

The latest controversy around Sizer has boosted the perception that he is not committed to a reconciliation agreement agreed with the Board of Deputies in 2012 and mediated by the Church of England. That agreement was the result of a Board of Deputies complaint concerning Sizer’s habit of linking to anti-semitic and racist websites, including one run by the former Ku Klux Klan leader David Duke, on his Facebook page and elsewhere online.

Several notorious anti-Semites joined Sizer at the Tehran conference, including the French-Cameroonian provocateur and comedian, Dieudonne M’bala M’bala, the originator of the anti-Semitic “quenelle” gesture.

It shows that both the Left and the Right are coming together in one crucial issue, the Zionist globalist threat to every people on Earth. This is what the Jewish tribalists have feared for years, and Dr. Duke has been on the cutting edge of bridging that divide.

The liberation of the European people, the Palestinian pople, and truly the liberation of the world has as precondition, the deposing of the Zionist tyranny over the international media, government and finance. Dr. Duke has carried this message successfully to America, to Europe and to the World.

Next Post Dr. Duke and Dr. Slattery on Church of England Vicar’s Impact!