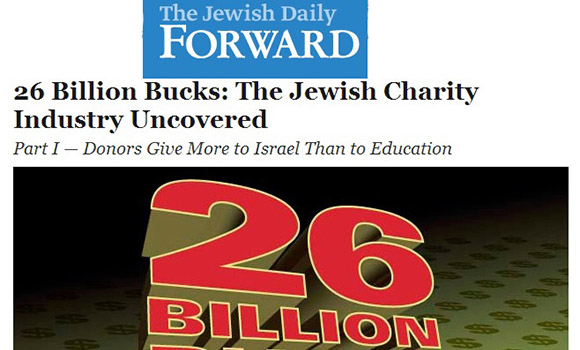 Pre-commentary by Dr. David Duke. An article in the Jewish Daily Forward newspaper has claimed that “Jewish charities” give more money to Israel than they do to education, and that this figure is of the order of $26 billion.

It is not anti-Semitic to point out the tremendous power of the Jewish Establishment in America and on a a global scale. One only has to look at the leading, powerful Jewish organizations that exist not only for direct Jewish advocacy in regard to Israel and perceived Jewish interests but in a wide range of domestic policies which these organizations view in the context of Jewish interests.

As Professor Kevin McDonald points out in this article below, this figure is actually not even the real total—it is considerably more.  As he points out, this figure does not include what is collected at synagogues—and then given to Israel—each month, because synagogues, schools and seminaries are not required to file tax returns.

This is of real importance for everyone who wishes to understand how the Jewish lobby in America works, and how it uses American money—and taxpayers—to keep the racist Jews-only state of Israel in business. Not only are these organizations unabashedly supportive of Israel, they take aggressive positions on most American domestic issues, such as destruction of the second amendment and promoting American open border policy.

Going back later you have a cup of coffee in the

The immense wealth of the Jewish lobby is not the product of “Jewish ingenuity”—it is the product of active discrimination in favor of Jews by other Jews—in the educational system, the economy and in the media. 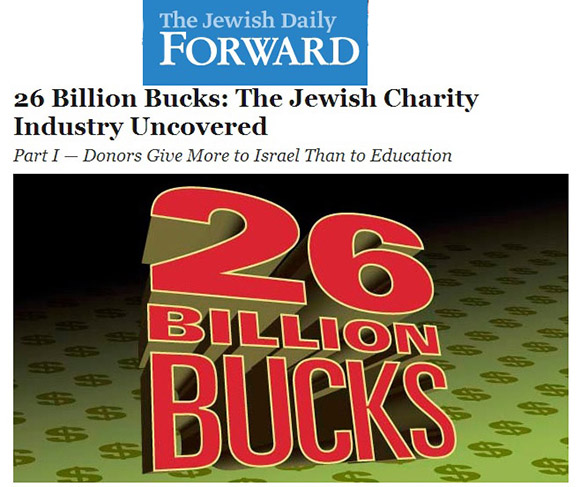 By Professor Kevin MacDonald. The $26 billion dollar figure in the title refers to the net assets of the network of explicitly Jewish charitable organizations, which puts it in the same league as a major corporation.

Annual revenue is around $12-14 billion. Assuming an American Jewish population of around 6.4 million, this implies assets per capita  of over $4000 and per capita annual giving of around half that. Based on an older survey indicating 2.3 persons per Jewish household, annual giving per household would be around $4600.

These numbers are certainly not earth shaking, but, when broken down to particular categories, they indicate that Jewish activist organizations are indeed well funded, especially when compared to the financial resources of organizations that oppose Jewish interests (probably well under $1 million for organizations explicitly dedicated to advancing the interests of White Americans).

Advocacy presumably includes the ADL which reported revenue of over $53 million in 2012—enough to fund over $31 million in employee salaries (including Abe Foxman at $688,188 ) and 28 regional offices.

That’s a lot of power in opposition to European interests given the virtual non-existence of organizations explicitly dedicated to furthering European identification and interests.

These numbers for donations to Jewish charity are underestimates because the IRS doesn’t require synagogues to file tax returns, and the same goes for schools and seminaries.  As a result, “the $12 billion to $14 billion in annual revenue, the Forward’s best estimate based on tax filings, is probably billions of dollars short of the network’s actual size.”

The other way in which such a report fails to get at the scope of financial support for Jewish ethnic activism is that it does not include organizations that are not explicitly Jewish but are supported by Jews for ethnic reasons.

As Norman Podhoretz notes, Jews are the financial engine of the left, but of course the vast majority of charity for leftist causes would not appear in the Forward article because they are not explicitly Jewish organizations.

A good example is the SPLC which is largely Jewish-funded but would not be considered a Jewish communal organization. (In 2012 the SPLC reported revenue of over $37 million and salaries of over $16 million.)

Or consider the neocon infrastructure, such as the Foundation for Defense of Democracies: All of the identifiable donors are Jews, including a host of well-known Jewish activists like Edgar M. Bronfman ($1,050,000) and Michael Steinhardt ($850,000) who co-founded the Birthright Israel program that brings Jewish young people to Israel for a dose of Jewish patriotism.

The same goes for the Republicans and Democrats, where Jewish funding promotes Israel and the liberal/left values of the Jewish community (likely at least 60% of Democrat funding, and at least 40% of Republican).

For example, Haim Saban has donated millions to the Democrats, and right now “Republicans who are considering a run for president are courting Sheldon Adelson [who donated more than $100 million to Republicans in the last presidential election cycle] as a preliminary to everything else they must do to prove their worthiness, like kissing babies in Iowa or formulating a position on jobs.”

And anyone with a half a brain knows that Adelson’s support begins and ends with what the candidate will do for Israel.

Ditto for David Gelfand’s donation of more than $100 million to the  Sierra Club on condition that it adopt a view on immigration in sync with the views of the organized Jewish community. (My gloss, but it’s hard to believe that his donation did not reflect the typical Jewish commitment to displacement-level immigration).

In other words, a lot of the most destructive Jewish funding is not included in these figures.

And even though the donations to the explicitly Jewish organizations covered by the article are only the tip of the iceberg, there is no suggestion that the Jewish community is highly mobilized at this time, as indicated by the per capita data.

A crisis in Israel would lead to a huge upsurge of Jewish funding, as it did during the 1967 and 1973 wars — as would any indication that European Americans are beginning to develop a sense of racial identity and beginning to assert their interests by developing explicitly European organizations which have the wherewithal to make a difference.

Previous Post Dr. Duke & Mark Collett: To the Anti-White scum who promised to leave: Get the Hell Out!

Next Post The Greatest Mass Murderers of all Time were Jews, says Jewish Columnist