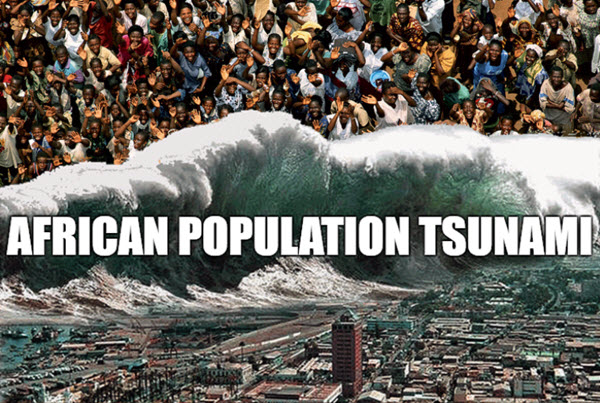 By Dr. Patrick Slattery — A few months ago Andrew Anglin wrote a satirical piece asking when the United Nations would take action to save the African elephant by culling homo erectus via mass sterilization and euthanasia. His suggested methods were outlandish, including the use of nuclear weapons and the introduction of genetically engineered epidemic diseases.

I think this was the most intellectually important article I have read in years. Not only does it address an existential threat to civilization, but it also illustrates the essential role being played by trolls in forcing society to face its real problems. First I would like to look at the threat posed by African overpopulation, not just to the rest of humanity, but to the entire ecosystem as we know it. Anglin cited United Nations data showing that the African population is rising from 200 million in 1950 to a projected 4.2 billion in 2100, an increase of 2000%. These projections foresee 40% of the world’s population and about half its children being African by the end of this century, which naturally would lead to an African majority for the world early in the 22nd Century. It would also wipe out the habitats of the world most iconic wildlife, eliminate its second largest rain forest, and no doubt wreak havoc on the climate that progressives love to fret about.

Yet the United Nations is strangely sanguine about this prospect:

“The future of humanity is increasingly African,” says a report by the UN children’s agency to be issued on Tuesday, based on revised population forecasts that reveal an unprecedented demographic shift this century. Africa accounted for only 9 per cent of the world’s population in 1950, but by the end of this century about 40 per cent of all humans (and nearly half of all children) will be African, heralding one of the fastest and most radical demographic changes in history, the report says.

While every other continent is seeing a slower rise in births, or even a decline, UNICEF projects that 1.8 billion babies will be born in Africa over the next 35 years, and the total African population will nearly quadruple to about 4.2 billion by the end of the century.

Africa could reap a massive demographic dividend from its bigger labour force and relatively fewer dependents, the report says. The population boom could “transform the continent, breaking centuries-old cycles of poverty and inequality.”

Could the authors of this report actually believe that African overpopulation will mean a “demographic dividend” and break “centuries-old cycles of poverty and inequity?”

As can be seen in the CIA Factbook, many sub-Saharan countries do not even have the capabilities of producing labor force participation data, and most of those that can show 80-90% of the labor force involved in agriculture, which is mostly at the subsistence level.

Outside of agriculture, the only occupations in Africa that produce anything for the world economy are in mining. Its manufacturing sector is tiny and heavily oriented to domestic consumption. While it is possible that as China becomes increasingly affluent, it may off-shore some of its menial labor sweatshops to Africa, but this hardly forms the basis for a demographic dividend that will break the cycle of poverty on the continent.

For those who chant the mantra that “education is the key,” please keep in mind that the United States spends more money per pupil than any country in the world except Norway, Switzerland, and Austria, and that spending on black children in the United States may well be GREATER than spending on white children.

The fact of the matter is that compared to the rest of the world, and certainly compared to any level plausible for Africa, the education of black kids in America is extremely generously funded, yet a look at Detroit, or any other area where society has to depend on a black labor and managerial force to support its infrastructure, betrays the hopelessness of a black-majority world being able to sustain civilization.

Think about it. The United States strains under the crime and welfare dependency of its 13% black minority. We stave off our economic collapse with loans and imports from East Asian countries free of multicultural enrichment. But if we become majority black? And Europe? And Japan? And China? And India?

One could imagine of a world in which the 4.2 billion Africans were contained in Africa. For such a population to be maintained in Africa, it would require everyone in the rest of the world basically working two shifts, one shift to support themselves and another shift to support Africans. But in reality? At some point wouldn’t the rest of humanity opt for one of the Anglin options?

I want to emphasize that this is an existential threat for humanity in the LONG TERM. In the SHORT TERM, of course, the existential threat to humanity is from Jewish domination of the power assets of the Western world, which could easily have placed a doomsday in the 2017 calendar had Hillary and her Jew Crew been given the chance to launch World War III again Putin’s Russia. Unless we take care of the Jewish problem, we won’t have the luxury of dealing with the “African future for humanity” that the UN looks forward to.

And this brings me to the role of trolls. As the passage quoted above illustrates, the UN has no plan for dealing with African overpopulation. They issue reports proclaiming a “demographic dividend,” while at the same time desperately managing the importation of infinite economic refugees from Africa into Europe, a phenomenon that belies their nonsense about the demographic dividend. (The World Bank also talks in terms of a demographic dividend.)

Even conservative publications like The Economist whistle past the graveyard, producing blithe articles about the investment opportunities in Africa’s growing banking sector. The default situation is for unrestrained population growth in Africa and large-scale emigration into the rest of the world. Emigration is not a solution. Even the massively disruptive level of immigration into Europe these past couple of years represents just a tiny fraction of African population growth. The fact is that virtually all net population growth for the world for the rest of the century is forecast to come from Africa. And while we have to consider what is good for our own people and good for the planet that our species has become the steward of, the prospects for four billion Africans who have killed the goose that laid their golden eggs are about as miserable as can be imagined.

The cause of this explosive growth is a combination of factors. While Arab slave traders plundered Africa for centuries, it is the contact that Africa had with the European world that led to its demographic expansion. European contact resulted in the transmission of agricultural, medical, and public health technology that reduced infant mortality and lengthened life expectancy. However, black fertility rates have remained high, apparently unaffected by factors that sooner or later checked birth rates on other continents. Liberal “We are the World” campaigns play a role, as to conservative “pro-life” prohibitions on American foreign aid being used for abortions.

At this point I feel a digression into the abortion issues is required. Prompted by pressure from what can only be called “evangelcucks,” North Carolina Senator Jesse Helms passed the Helms amendment that prohibits US foreign aid from financing abortions. How important is this? Well, in the United States, black mothers are three times as likely to abort children as whites. And because the black population is younger and proportionally more likely to be in child-bearing years, this means that there are as many abortions of black fetuses as whites, even though there are five times as many whites. In other words, if you are really in a hurry to have whites become a minority in America, and blacks a majority around the world, ban abortion.

What we have in America and the Western world is a right wing that insists that every conception becomes a baby and a left that insists that every baby is guaranteed the education, health care, and lifetime sustenance. These are thoroughly maladaptive tendencies on the part of whites that if left unchecked will see civilization surrendered without a shot to the very population least able to sustain it.

Like with the Jewish question, it takes a troll to break the taboo of political correctness and point out that the Emperor has no clothes. Sure, someone like me can sacrifice a career in academia and try to write scholarly articles on his days off from his Clark Kent job in the hopes that someone of influence might read them. But the troll reaches vast numbers of people, piques their curiosity, and creates an opening for others (or even the troll himself) to follow with facts and figures and logic and reasoning.

Andrew Anglin, by suggesting his outlandish solutions, begs the question “do you have a better plan?” And his question echoes through the offices of academics and bureaucrats, who would rather whistle past the graveyard than risk sounding racist by voicing the undeniable truth that unless things change civilization will not survive.

Whites, East Asians, and more recently even Indians and Latin Americans have been suppressing their own reproduction with the understanding that those babies whom they do produce will have a better future in a demographically sustainable society. In a world of effective borders and national self-determination and responsibility, this would make perfect sense. But in the crazy upside-down Zio-world of our reality, it means those groups, those nations, those races that are the most capable of reasoning and forward thinking must commit to voluntary self-extermination while devoting their dying efforts to the support of the demographic expansion of the group with the least responsibility or self-restraint.

And then there are the Jews. If you haven’t noticed, an increasingly Orthodox Jewish population both in Israel and in the diaspora have been busily procreating, and as they gain firmer and firmer control over the power assets being bequeathed to them by unwitting whites, there will come a time when they dispense with the niceties of European altruism and give the Palestinian treatment to whatever group inconveniences them. But in the meantime, we face an increasingly Africanized human species.

And an increasingly disappearing white race. But this is the race that invented most of the technology and culture that are the hallmarks of our planet’s advanced civilization. This is the race that left its footprints on another world. It is surely the race that, if it sets its mind to it, can figure out a way for all the peoples of the world to live in dignity in there own homelands.

Previous Post Rep. Tulsi Gabbard May be Liberal – But She Knows the Zio-made Syria War is Evil!

Next Post Dr. Duke and Dr. Slattery Talk About the Jewish Coup Planned Against the Trump Presidency & How to Expose It and Fight It!